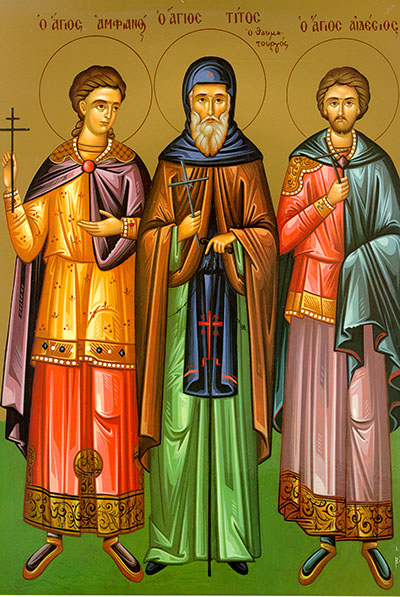 From his youth, Titus loved Christ the Lord and detested the vanities of the world. Because of this, he retreated from the world, entered a monastery and received the angelic habit. Without regret, he dedicated himself to the somber and narrow path of monasticism. Through great patience, he attained two basic virtues: humility and obedience. In these virtues he surpassed “not only the brethren, but all men.” From his youth he preserved the purity of his souls and body. At the time of the iconoclastic heresy he proved himself to be an unwavering pillar of the Church of God. Because of his great humility and purity, God bestowed upon him the gift of performing miracles, both during his lifetime and after his death. When he went to the Lord he left behind a countless number of disciples. He died peacefully in the 9th century.

In you, O holy father Titus, the faithful image of God shone forth, for you carried your cross and followed Christ. You taught by your deeds how to spurn the body, for it passes away; and how to value the soul, for it is immortal. Therefore, your soul is forever in happiness with the angels.

You passed your life in silence and drew near to God, O venerable and miracle-working father Titus.

Brothers and sisters: Christ did not enter into a sanctuary made by hands, a mere copy of the true one; he entered heaven itself that he might appear before God now on our behalf. Not that he might offer himself there again and again, as the high priest enters year after year into the sanctuary with blood that is not his own; if that were so, he would have had to suffer death over and over from the creation of the world. But now he has appeared at the end of the ages to take away sins once for all by his sacrifice. Just as it is appointed that men die once, and after death be judged, so Christ was offered up once to take away the sins of many; he will appear a second time not to take away sin but to bring salvation to those who eagerly await him.

At that time, Jesus and his disciples set out for the village around Caesarea Phillipi. On the way he asked his disciples this question: “Who do people say that I am?” They replied, “Some say John the Baptizer, others, Elijah, still others, one of the prophets.” “And you,” Jesus went on to ask, “who do you say that I am?” Peter answered him, “You are the Messiah!” Then Jesus gave them strict orders not to tell anyone about him. He began to teach them that the Son of Man had to suffer much, be rejected by the elders, the chief priests, and the scribes, be put to death, and rise three days later.