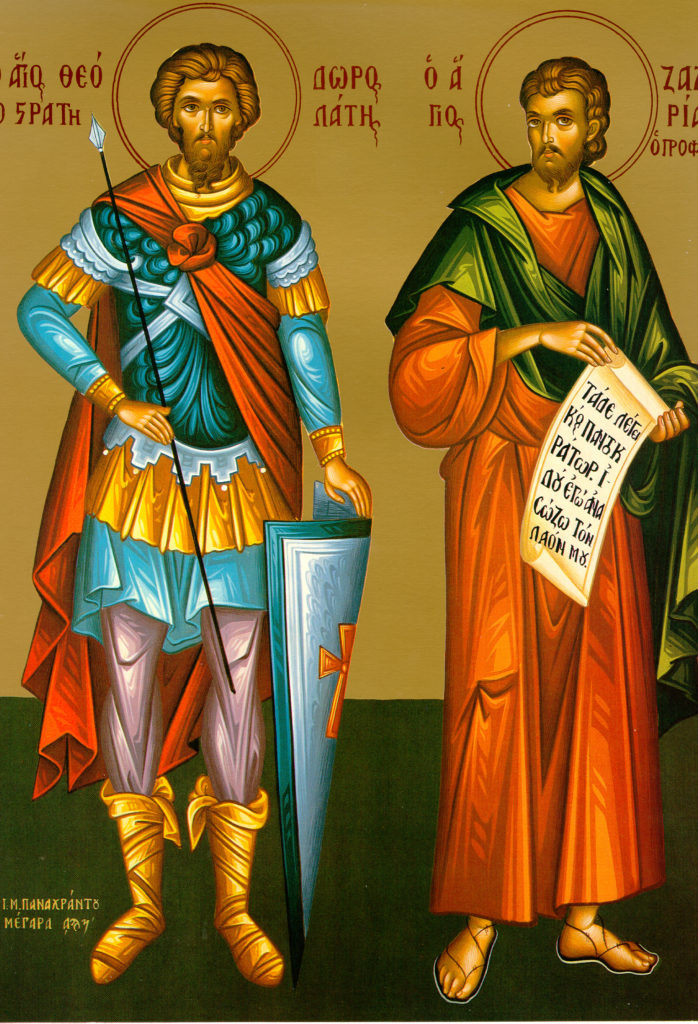 St. Theodore, a Roman commander in the army of emperor Licincius and the governor of the town of Heraclea, scorned his youth, his handsome appearance, his military rank, and the good grace of the emperor; he was martyred in the year 318.  His miracle-working relics were translated from Euchaita to Constantinople and interred in the Blanchernae church.

The holy prophet Zechariah, who prophesied that the Chosen People would return from their exile to the land of promise. He bore the news to them of the king of peace, which Christ the Lord fulfilled marvelously by his triumphant entrance to the holy city of Jerusalem.

O Theodore the triumphant, you became a brilliant general in the armies of the King of heaven. You fought courageously with the weapons of faith and put the legions of demons to flight. Therefore, we praise you with fervor at all times.

As we celebrate the memory of you prophet Zechariah, O Lord, we implore You to save our souls through his prayers.

O Theodore, the pride of martyrs. You put on the armor of faith and took the Word of God as a spear to vanquish the enemy. In the company of the martyrs, do not cease to intercede with Christ our God in behalf of all of us.

You saw the chariots being directed by the hand of God, and you looked down upon the servants, O Zechariah. As you rest among them now as a favored prophet, pray for those who remember you with unwavering faith, that we may walk the road of understanding.

Readings for the Martyr

Timothy, my son: You must be strong in the grace which is ours in Christ Jesus. The things which you have heard from me through many witnesses you must hand on to trustworthy men who will be able to teach others. Bear hardship along with me as a good soldier of Christ Jesus. No soldier becomes entangled in the affairs of civilian life; he avoids this in order to please his commanding officer. Similarly, if one takes part in an athletic contest, he cannot receive the winner’s crown unless he has keeps the rules. The hard-working farmer is the one who should have the first share of the crop. Reflect on what I am saying, for the Lord will make my meaningfully clear.

Remember that Jesus Christ, a descendant of David, was raised from the dead. This is the gospel I preach; in preaching it I suffer as a criminal, even to the point of being thrown into chains – but there is no chaining the word of God! Therefore I bear with all of this for the sake of those whom God has chosen, in order that they may obtain the salvation to be found in Christ Jesus and with it eternal glory.

The Lord said to his disciples: “What I am doing is sending you out like sheep among wolves. You must be as clever as snakes and innocent as doves. Be on your guard with respect to others. They will hale you into court, they will flog you in their synagogues. You will be brought before them and before the Gentiles on my account. When they hand you over, do not worry about what you will say or how you will say it. When the hour comes, you will be given what you are to say. You yourselves will not be the speakers; the Spirit of your Father will be speaking in you.

Dearly beloved, if our consciences have nothing to charge us with, we can be sure that God is with us and that we will receive at his hands whatever we ask. Why? Because we are keeping his commandments and doing what is pleasing in his Sight. His commandment is this: we are to believe in the name of the Son, Jesus Christ, and are to love one another as he commanded us. Those who keep his commandments remain in him and he in them. And this is how we know that he remains in us: from the Spirit that he gave us.

Beloved, do not trust every spirit, but put the spirits to a test to see if they belong to God, because many false prophets have appeared in the world. This is how you can recognize God’s Spirit: every spirit that acknowledges Jesus Christ come in the flesh belongs to God, while every spirit that fails to acknowledge him does not belong to God. Such is the spirit of the antichrist which, as you have heard, is to come; in fact, it is in the world already.

You are of God, you little ones, and thus you have conquered the false prophets. For there is One greater in you than there is in the world. Those others belong to the world; that is why theirs is the language of the world and why the world listens to them. We belong to God and anyone who has knowledge of God gives us a hearing, while anyone who is not of God refuses to hear us. Thus do we distinguish the spirit of truth from the spirit of deception.

At that time while Jesus was still speaking, Judas, one of the Twelve, made his appearance accompanied by a crowd with swords and clubs; these people had been sent by the chief priests, the scribes, and the elders. The betrayer had arranged a signal for them, saying, “The man I shall embrace is the one; arrest him and lead him away, taking every precaution.” Judith then went directly over to Jesus and said, “Rabbi!” and embraced him. At this, they laid hands on Jesus and arrested him. One of the bystanders drew his sword and struck the high priest’s slave, cutting off his ear. Addressing himself to them, Jesus said: “You have come out to arrest me armed with swords and clubs as if against a brigand. I was within your reach daily, teaching in the temple precincts, yet you never arrested me. But now, so that the Scriptures may be fulfilled…” with that, all deserted Jesus and fled. There was a young man following Jesus who was covered by nothing but a linen cloth. As they seized him he left the cloth behind and ran off naked.

Then they led Jesus off to the high priest, and all the chief priests, the elders and the scribes came together. Peter followed him at a distance right into the high priest’s courtyard, where he found seat with the temple guard and began to warm himself at the fire. The chief priests with the whole Sanhedrin were busy soliciting testimony against Jesus that would lead to his death, but they could not find any. Many spoke against him falsely under oath but their testimony did not agree. Some, for instance, on taking the stand, testified falsely by alleging, “We heard him declare, ‘I will destroy this temple made by human hands’, and ‘In three days I will construct another not made by humans hands.’” Even so, their testimony did not agree…

The high priest rose to his feet before the court and began to interrogate Jesus: “Have you no answer to what these men testify against you?” But Jesus remained silent; he made no reply. Once again the high priest interrogated him: “Are you the Messiah, the Son of the Blessed One?” Then Jesus answered: “I am; and you will see the Son of Man seated at the right hand of the Power and coming with the clouds of heaven.” At that the high priest tore his robes and said: “What further need do we have of witnesses? You have heard the blasphemy. What is your verdict?” They all concurred in the verdict “guilty“, with a sentence of death. Some of them began to spit on Jesus. They blindfolded him and hit him, saying, “Play the Prophet!“ While the officers manhandled him.

While Peter was down in the courtyard, one of the servant girls of the high priest came along. When she noticed Peter warming himself, she looked at him more closely and said, “You too were with Jesus of Nazareth.“ But he denied it: “I do not know what you are talking about! What are you getting at?” Then he went out into the gateway. [At that moment a cock crowed.] The servant girl, keeping an eye on him, started again to tell the bystanders, “This man is one of them.” Once again he denied it. A little later the bystanders said to Peter once more, “You are certainly one of them! You are a Galilean, are you not?” He began to curse, and to swear, “I do not even know the man you are talking about!” Just then a second cockcrow was heard and Peter recalled the prediction Jesus had made to him, “Before the cock crows twice you will deny me three times.” Peter broke down and began to cry.

As soon as it was daybreak the chief priest, with the elders and scribes (that is, the whole Sanhedrin), reached a decision. They bound Jesus, led him away, and handed him over to Pilate.