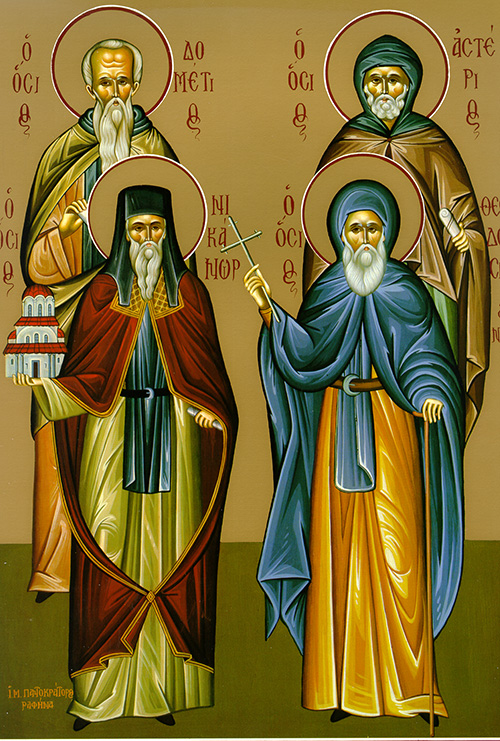 The holy venerable martyr Dometius lived in Persia during the 4th century. In his youth he was converted to the Faith by a Christian named Uaros. Forsaking Persia, St. Dometius withdrew to the frontier city of Nisibis (in Mesopotamia), where he was baptized in one of the monasteries, and also received the monastic tonsure. Fleeing the ill-will of some of the monks, St. Dometius moved to the monastery of Saints Sergius and Bacchus in the city of Theodosiopolis. The monastery was under the guidance of an archimandrite named Urbelos, a strict ascetic. In this monastery St. Dometius was ordained a deacon, but when the archimandrite decided to have Dometius made a presbyter, the saint, considering himself unworthy, hid himself on a desolate mountain in Syria, in the region of Cyrrhus. Many pagans were brought to faith in Christ by St. Dometius. At one time, the emperor Julian the Apostate (361-363) arrived in the area, found St. Dometius praying with his disciples in a cave, and walled them up alive inside.

Trained in asceticism on the mountain, you were able to defeat the assaults of the devil by the power of the Cross, O holy Dometius. With great courage, you faced the battle and crushed the hostile emperor with the sword of faith. O glorious monk and martyr, God crowned you for your asceticism and your good fight.

You once turned from perishable goods and earthly thoughts which destroy. You became an inspiration for monks, O father Dometius, and you did not shake before the anger of the king who tried to turn you away from honoring Christ. You were killed for your valiant stand; and we sing a hymn of praise to your honor, remembering your death song: God is with me, and no one can prevail against me.

Brothers and sisters: [Apollos and I] are God’s co-workers, while you are his cultivation, his building. Thanks to the favor God showed me I laid a foundation as a wise master-builder might do, and now someone else is building upon it. Everyone, however, must be careful how he builds. No one can lay a foundation other than the one that has been laid, namely Jesus Christ. If different ones build on this foundation with gold, silver, precious stones, wood, hay or straw, the work of each will be made clear. The Day will disclose it. That day will make its appearance with fire, and fire will test the quality of each man’s work. If the building a man has raised on this foundation still stands, he will receive his recompense; if a man’s building burns, he will suffer loss. He himself will be saved, but only as one fleeing from fire.

At that time while dismissing the crowds, Jesus insisted that his disciples get into the boat and precede him to the other side of the lake. When he had sent them away, he went up on the mountain by himself to pray, remaining there alone as evening drew on. Meanwhile the boat, already several hundred yards out from shore, was being tossed about in the waves raised by strong headwinds. At about three in the morning, Jesus came walking toward them on the lake. When the disciples saw him walking on the water, they were terrified. “It is a ghost!” they said, and in their fear they began to cry out. Jesus hastened to reassure them: “Get hold of yourselves! It is I. Do not be afraid!” Peter spoke up and said, “Lord, if it is really you, tell me to come to you across the water.” “Come!” Jesus said. So Peter got out of the boat and began to walk on the water, moving toward Jesus. But when he perceived how strong the wind was, becoming frightened, he began to sink and cried out, “Lord, save me!” Jesus at once stretched out his hand and caught him. “How little faith you have!” he exclaimed. “Why did you falter?” Once they had climbed into the boat, the wind died down. Those who were in the boat showed him reverence, declaring, “Beyond doubt you are the Son of God.” After making the crossing they reached the shore at Gennesaret.