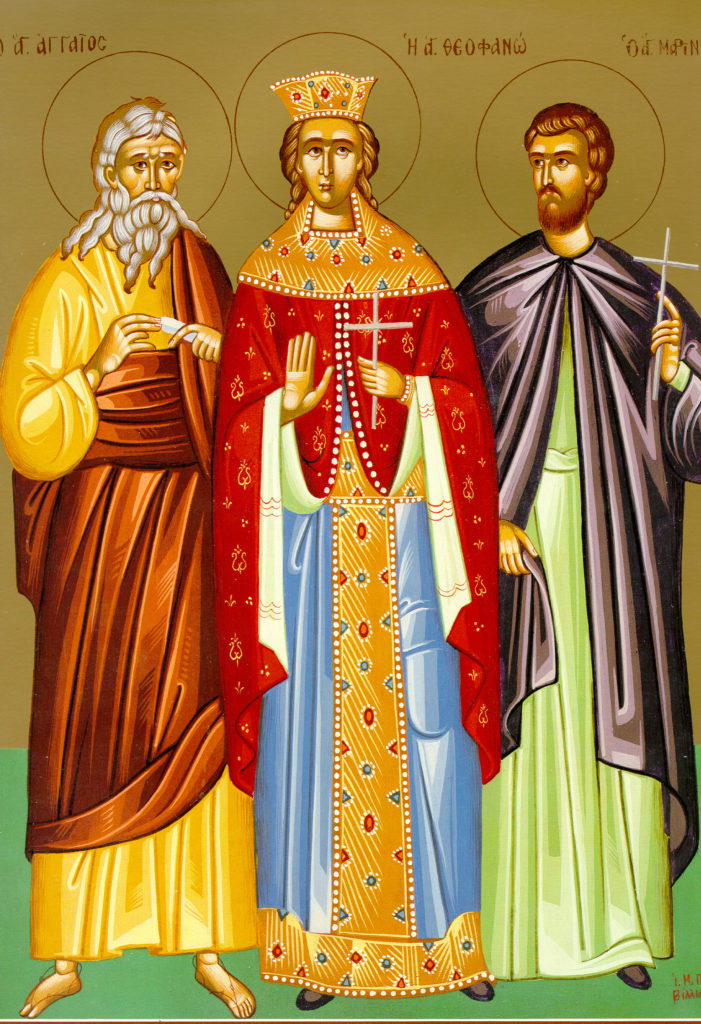 The holy prophet Haggai was the 10th of the 12 minor prophets. He was of the Tribe of Levi and he prophesied during the times of the Persian emperor Darius Hystaspis (prior to 500 B.C.). Upon the return of the Jews from the Babylonian Captivity, he persuaded the people to build the Second Temple at Jerusalem, and he proclaimed that the Messiah would appear in this Temple in the last times. It is believed that Haggai was buried with the priests at Jerusalem, since he was descended from Aaron.

Your eyes were opened to pure spiritual reality that is all from God which you prophesied and understood, O all-praised prophet, guide of peaceful repentance. Therefore we celebrate your holy memory, and we pray you, to intercede especially for prayers to God, O Haggai.

Titus, my son: To the clean all things are clean, but to those defiled unbelievers nothing is clean. Their very minds and consciences are tainted. They claim to “know God,” but by their actions they deny that he exists. They are disgusting – intractable and thoroughly incapable of any decent action.

As for yourself, let your speech be consistent with sound doctrine. Tell the older men that they must be temperate, serious-minded, and self-controlled; likewise sound in the faith, loving and steadfast. Similarly, the older women must behave in ways that befit those who belong to God. They must not be slanderous gossips or slaves to drink. By their good example they must teach the younger women to love their husbands and children, to be sensible, chaste, busy at home, kindly, submissive to their husbands. Thus the word of God will not fall into disrepute. Tell the young men to keep themselves completely under control – nor may you yourself fail to set them good example. Your teaching must have the integrity of serious, sound words to which no one can take exception.  If it does, no opponent will be able to find anything bad to say about us, and hostility will yield to shame.

Slaves are to be submissive to their masters. They should try to please them in every way, not contradicting them nor stealing from them, but expressing a constant fidelity by their conduct, so as to adorn in every way possible the doctrine of God our Savior.

At that time another large crowd assembled, and they were without anything to eat. He called the disciples over to him and said: “My heart is moved with pity for the crowd. By now they have been with me for three days and have nothing to eat. If I send them home hungry, they will collapse on the way. Some of them have come a great distance.” His disciples replied, “How can anyone give these people sufficient bread in this deserted spot?” Still he asked them, “How many loaves do you have?” “Seven,” they replied. Then he directed the crowd to take their places on the ground. Taking the seven loaves he gave thanks, broke them, and gave them to his disciples to distribute, and they handed them out to the crowd. They also had a few small fish; aksing a blessing on the fish, he told them to distribute these also. The people in the crowd ate until they had their fill; then they gathered up seven wicker baskets of leftovers. Those who had eaten numbered about four thousand. He dismissed them and got into the boat with his disciples to go to the neighborhood of Dalmanutha.