Dec. 25 The Nativity of Our Lord God and Savior Jesus Christ 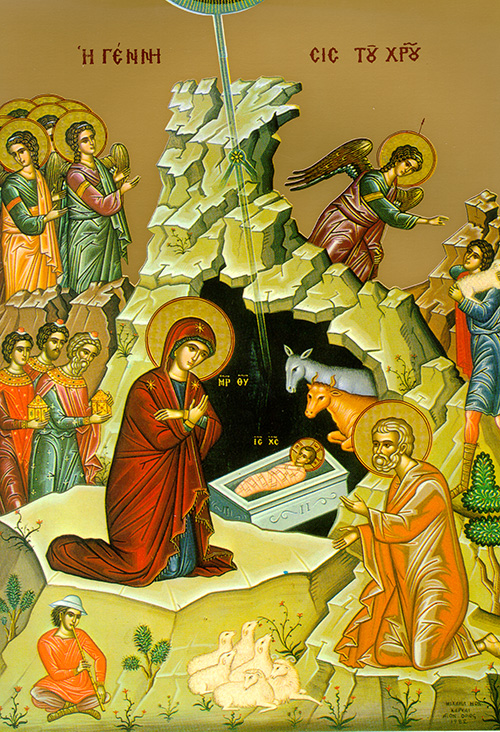 The Nativity in the Flesh of Our Lord God and Savior Jesus Christ: “When the fullness of time was come, God sent his only-begotten Son” (Galatians 4:4) to save the human race. Nine months after his conception in the womb of the Theotokos and ever-virgin Mary, the Second Person of the Blessed Trinity was born in a stable in Bethlehem of Judea. To Him be eternal glory and praise! Amen.

Your birth, O Christ our God, has shed upon the world the light of knowledge; for through it those who worshiped the stars have learned from a star to worship You, the Sun of Justice, and to know You, the Dawn from on High. Glory to You, O Lord!

Today the Virgin gives birth to the Transcendent One; and the earth offers up a cave to the Unapproachable. The angels sing his glory with the shepherds; the wise men journey with the star. The eternal God is born for us as an infant child.

Brothers and sisters: When the designated time had come, God sent forth his Son born of a woman, born under the law, to deliver from the law those who were subjected to it, so that we might receive our status as adopted sons. The proof that you are sons is the fact that God has sent forth into our hearts the Spirit of his Son which cries out “Abba!”(“Father!”) You are no longer a slave but a son! And the fact that you are a son makes you an heir, by God’s design.

After the birth of Jesus in Bethlehem of Judea during the reign of King Herod, astrologers from the East arrived one day in Jerusalem inquiring, “Where is the newborn King of the Jews? We observed his star at its rising and have come to pay him homage.” At this news King Herod became greatly disturbed, and with him all Jerusalem. Summoning all of the chief priests and scribes of the people, he inquired of them where the Messiah was to be born. “In Bethlehem of Judea,” they informed him. “Here is what the prophet has written: ‘And you, Bethlehem, land of Judah, are by no means least among the princes of Judah, since from you shall come a ruler who is to shepherd my people Israel.’”

Herod called the astrologers aside and found out from them the exact time of the star’s appearance. Then he sent them to Bethlehem, after having instructed them: “Go and get detailed information about the child. When you have found him, report it to me so that I may go and offer him homage too.”

After their audience with the king, they set out. The star which they had observed at its rising went ahead of them until it came to a standstill over the place where the child was. They were overjoyed at seeing the star, and on entering the house, they found the child with Mary his mother. They prostrated themselves and did him homage. Then they opened their coffers and presented him with gifts of gold, frankincense, and myrrh. They received a message in a dream not to return to Herod, so they went back to their own country by another route.

Christ is Born! Glorify Him!