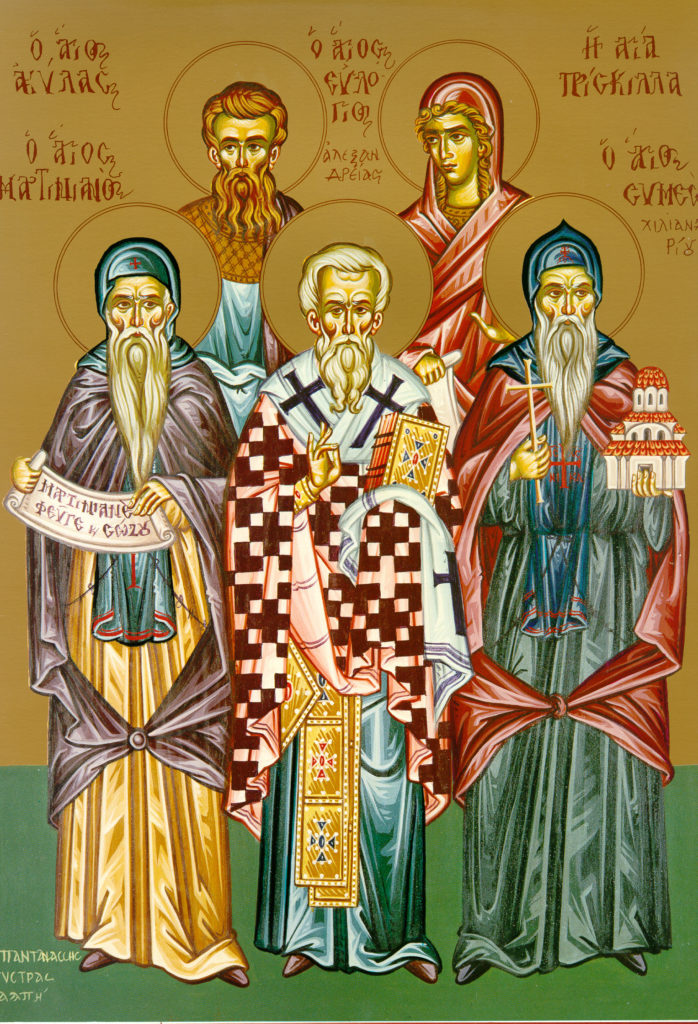 At the age of 18, Martinian retreated to a mountain in Cappadocia called the Place of the Ark, where he lived for 25 years in fasting, vigil and prayer, struggling with many temptations. When a woman came to tempt him, Martinian, perceiving that he would succumb to sin with her, jumped into the fire barefoot and remained in there until the pain brought tears to his eyes and subdued all lust within himself. When another temptation erupted, Martinian fled to an isolated rock in the sea and lived there. Following a shipwreck, a young woman swam to this rock. Martinian jumped into the sea to avoid any further temptation, but a dolphin rescued him in its back and by God’s providence brought him back to shore. Martinian then decided to never make any place his permanent home but to continually travel. In two years, he passed through 164 towns, correcting and counseling the people. He finally reached Athens, where he reposed in the year 422.

O blessed Martinian, you appeased the flames of passion with streams of tears; you calmed the waves of the sea and stopped the assault of the wild beasts. You cried out: Glorified are You, O almighty God. You saved me from fire and storm.

Let us praise with hymns the ever-blessed Martinian who trod on the serpent, the pious and experienced ascetic, the earnest defender of truth, and the courageous dweller in the desert.

Do you not see that your bodies are members of Christ? Would you have me take Christ’s members and make them the members of a prostitute? God forbid! Can you not see that the man who is joined to a prostitute becomes one body with her? Scripture says, “The two shall become one flesh.” But whoever is joined to the Lord becomes one spirit with him. Shun lewd conduct. Every other sin a man commits is outside his body, but the fornicator sins against his own body. You must know that your body is a temple of the Holy Spirit, who is within pp the Spirit you have received from God. You are not your own. You have been purchased, and at a price. So glorify God in your body.

The Lord told this parable: “A man had two sons. The younger of them said to his father, ‘Father, give me the share of the estate that is coming to me.’ So the father divided up the property. Some days later this younger son collected all his belongings and went off to a distant land, where he squandered his money on dissolute living. After he had spent everything, a great famine broke out in that country and he was in dire need. So he attached himself to one of the propertied class of the place, who sent him to his farm to take care of the pigs. He longed to fill his belly with the husks that were fodder for the pigs, but no one made a move to give him anything. Coming to his senses at last, he said: ‘How many hired hands at my father’s place have more than enough to eat, while here I am starving! I will break away and return to my father, and say to him, Father, I have sinned against God and against you; I no longer deserve to be called your son. Treat me like one of your hired hands.’ With that he set off for his father’s house. While he was still a long way off, his father caught sight of him and was deeply moved. He ran out to meet him, threw his arms around his neck and kissed him. The son said to him, ‘Father, I have sinned against God and against you; I no longer deserve to be called your son.’ The father said to his servants: ‘Quick! Bring out the finest robe and put it on him; put a ring on his finger and shoes on his feet. Take the fatted calf and kill it. Let us eat and celebrate because this son of mine was dead and has come back to life. He was lost and is found.’ Then the celebration began.

“Meanwhile the elder son was out on the land. As he neared the house on his way home, he heard the sound of music and dancing. He called one of the servants and asked him the reason for the dancing and the music. The servant answered; ‘You brother is home, and your father has killed the fatted calf because he has him back in good health.’ The son grew angry at this and would not go in; but his father came out and began to plead with him.

“He said to his father in reply: ‘For years now I have slaved for you. I never disobeyed one of your orders, yet you never gave me so much as a kid goat to celebrate with my friends. Then, when this son of yours returns after having gone through your property with loose women, you kill the fatted calf for him.’

“‘My son,’ replied the father, ‘you are with me always, and everything I have is yours. But we had to celebrate and rejoice! This brother of yours was dead, and has come back to life. He was lost, and is found.’”