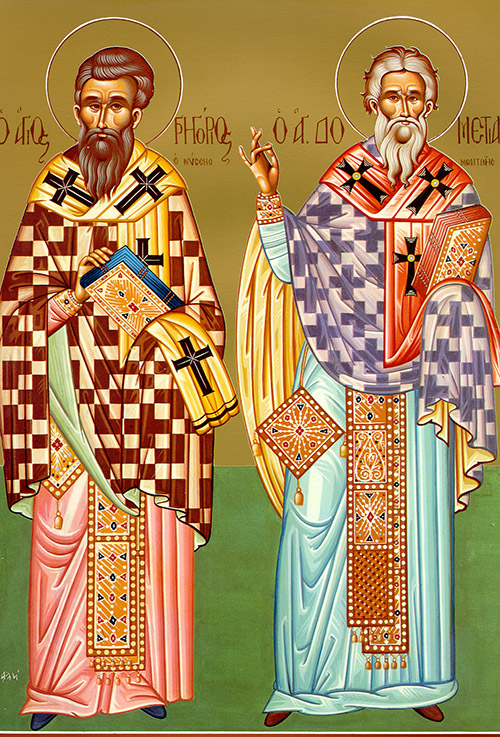 Our Holy Father Gregory of Nyssa, brother of St. Basil the Great, one of the great theologians of the Byzantine Church (c. 395)

The Venerable Dometian, Bishop of Melitene, who lived under Emperors Justinian the Lesser and Maurice, was known for his remarkable intelligence, prudence, and spiritual zeal, and for his love of the poor. (602)

Our Venerable Father Marcian, priest and treasurer of the Great Church in Constantinople, second in command to Patriarch Gennadius. (c. 471)

God of our fathers, You always deal with us according to Your everlasting compassion. Take not Your mercy away from us; but through their prayers guide our life in peace.

That heavenly hierarch of the Church and precious mystic orator of Wisdom, that vigilant mind, Gregory of Nyssa, sings praises along with the angels and finds delight in the Light divine. He now prays unceasingly for all of us.

You were anointed with the divine priesthood, and you showed this by virtue and obedience to Christ. Having finished your course, O Father, you sing with the angels in heaven: Glory to your compassion, O Savior! Glory to your kingdom! Glory to your providence, O Lover of Humankind!

Then He summoned His twelve disciples and gave them the authority to expel unclean spirits and to cure sickness and disease of every kind.

Jesus sent these men on mission as the Twelve, after giving them the following instructions:

“Do not visit pagan territory and so not enter a Samaritan town. Go instead after the lost sheep of the house of Israel. As you go, make this announcement, ‘The reign of God is at hand! Cure the sick, raise the dead, heal the leprous, expel demons. The gift you have received, give as a gift.”

Readings of the Day

Brothers and sisters: If that first covenant had been faultless, there would have been no place for a second one. But God, finding fault with them, says, “Days are coming, says the Lord, when I will make a new covenant with the house of Israel and with the house of Judah. It will not be like the covenant I made with their fathers the day I took them forth from the land of Egypt; for they broke my covenant and I grew weary of them, says the Lord. But this is the covenant I will make with the house of Israel after those days, says the Lord: I will place my laws in their minds and I will write them upon their hearts; I will be their God and they shall be my people. And they shall not teach their fellow citizens or their brothers, saying, ‘Know the Lord,’ for all shall know me, from least to greatest. I will forgive their evildoing, and their sins I will remember no more.”

When he says, “a new covenant,” he declares the first one obsolete. And what has become obsolete and has grown old is close to disappearing.

At that time the Pharisees came forward and began to argue with Jesus. They were looking for some heavenly sign from him as a test. With a sigh from the depths of his spirit Jesus said: “Why does this age seek a sign? I assure you, no such sign will be given it!” Then he left them, got into the boat again, and went off to the other shore.

They had forgotten to bring any bread along; except for one loaf they had none with them in the boat. So when Jesus instructed them, “Keep your eyes open! Be on your guard against the yeast of the Pharisees and the yeast of Herod,” they concluded among themselves that it was because they had no bread. Aware of this Jesus said to them, “Why do you suppose that it is because you have no bread? Do you still not see or comprehend? Are your minds completely blinded? Have you eyes but no sight? Ears but no hearing? Do you remember when I broke the five loaves for the five thousand, how many baskets of fragments did you collect?” They answered, “Seven.” He said to them again, “Do you still not understand?”