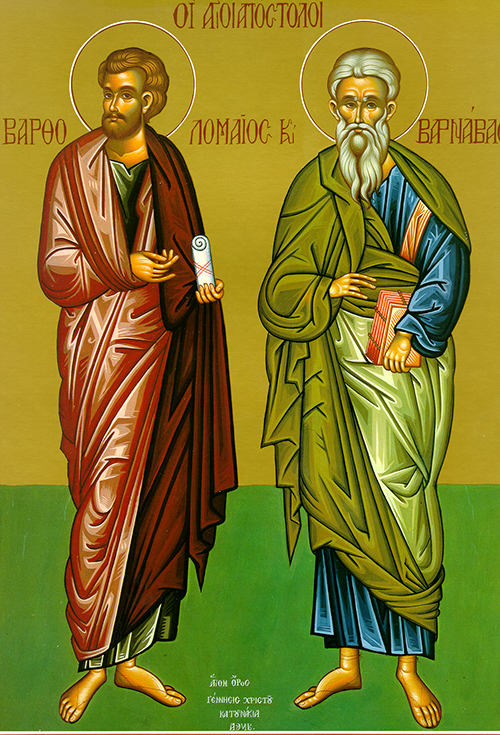 The holy apostle Barnabas was a good man and “full of the Holy Spirit and of faith.” He was counted among the first of the faithful at Jerusalem, preached the Gospel at Antioch and introduced Saul of Tarsus, just converted, to a number of the brothers. He accompanied Paul on his first trip to Asia to evangelize. He was present at the Council of Jerusalem. Having returned to the island of Cyprus, his native land, he spread the Gospel there.

Bartholomew the Apostle, who is believed by many to be the same as Nathanael, was born in Cana of Galilee and was taken to Christ Jesus by Philip at the Jordan. Afterwards, the Lord called him to follow him and he joined the Twelve. After the Ascension of the Lord it is said that he preached the Gospel in India and there was crowned with martyrdom.

Receiving the Spirit as He came in fiery tongues, you preached the coming of the Word in the flesh. While one of you was beheaded for the Gospel, the other endured stoning for the sake of the faith. You have been sent to adorn the choirs of heaven, O Bartholomew and Barnabas. We honor your memory and ask that you intercede with God to forgive our sins.

O Bartholomew, apostle of the Lord, you appeared to the world as a shining star. You enlightened with the splendor of your teachings and the wonder of your miracles all those who honor you.

O Barnabas, you became a perfect and faithful servant of the Lord. You were the first of the seventy disciples, worthy to be the companion of Paul in his preaching. You proclaimed to all that Christ is the Savior. Therefore, we celebrate your holy memory with hymns and songs.

In those days, those in the community who had been dispersed by the persecution that arose because of Stephen went as far as Pheonicia, Cyprus, and Antioch, making the message known to none but the Jews. However, some men of Cyprus and Cyrene among them who had come to Antioch began to talk even to the Greeks, announcing the good news of the Lord Jesus to them. The hand of the Lord was with them and a great number of them believed and were converted to the Lord. News of this eventually reached the ears of the church in Jerusalem, resulting in the sending of Barnabas to Antioch. On his arrival he rejoiced to see the evidence of the Lord, since he himself was a good man filled with the Holy Spirit and faith. Thereby large numbers were added to the Lord. Then Barnabas went off to Tarsus to look for Saul; once he had found him, he brought him back to Antioch. For a whole year they met with the church and instructed great numbers. It was in Antioch that the disciples were called Christians for the first.

At about that time, certain prophets came down from Jerusalem to Antioch. One of them named Agabus was inspired to stand up and proclaim that there was going to be a severe famine all over the world. (It did in fact occur while Claudius was emperor.) This made the disciples determined to set something aside, each according to his means, and send it to the relief of the brothers who lived in Judea. They did this, dispatching it to the presbyters in the care of Barnabas and Saul.

The seventy-two disciples returned in jubilation saying, “Master, even the demons are subject to us in your name.” Jesus said in reply: “I watched Satan fall from the sky like lightning. See what I have done; I have given you power to tread on snakes and scorpions and all the forces of the enemy, and nothing shall ever injure you. Nevertheless, do not rejoice so much in the fact that the devils are subject to you as that your names are inscribed in heaven.”

At that moment Jesus rejoiced in the Holy Spirit and said: “I offer you praise, O Father, Lord of heaven and earth, because what you have hidden from the learned and the clever you have revealed to the merest children. Yes, Father, you have graciously willed it so.”

Brothers and sisters: Grace and peace from God our father and the Lord Jesus Christ. First of all, I give thanks to my God through Jesus Christ for all of you because your faith is heralded throughout the world. The God I worship in the spirit by preaching the gospel of his Son will bear witness that I constantly mention you in prayer, always pleading that somehow by God’s will I may at last find my way clear to visit you. For I long see and share with you some spiritual gift to strengthen you–rather, what I wish is that we may be mutually encouraged by our common faith.

The Lord said: “Give to the man who begs from you. Do not turn your back on the borrower. You have heard the commandment, ‘You shall love your countryman but hate your enemy.’ My command to you is: love your enemies, pray for your persecutors. This will prove that you are sons of your heavenly Father, for his sun rises on the bad and the good, he rains on the just and the unjust. If you love those who love you, what merit is there in that? Do not tax collectors do as much? And if you greet your brothers only, what is so praiseworthy about that? Do not pagans do as much? In a word, you must be made perfect as your heavenly Father is perfect.”