Mar. 06 The Forty-Two Martyrs of Ammorium 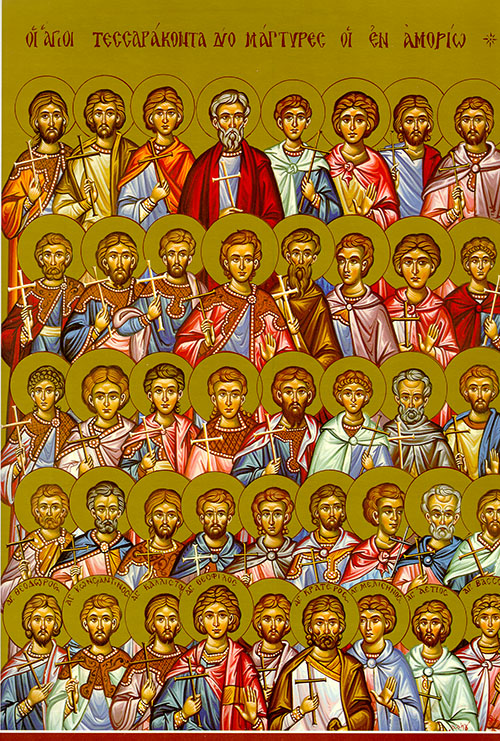 During a ninth-century war between the Byzantine Emperor Theophilus and the Saracens, the Saracens managed to besiege the city of Ammoria. As a result of treason by the military commander Baditses, Ammoria fell and forty-two of its generals were taken captive and sent off to Syria. During the seven years of their imprisonment, their captors tried in vain to persuade them to renounce Christianity and accept Islam. The captives stubbornly resisted all their seductive offers and bravely held out against terrible threats. After many torments failed to break the spirit of the Christian soldiers, they condemned them to death, hoping to shake the determination of the saints before executing them. The martyrs remained steadfast. The executioners took each one separately and led him off to be beheaded, then threw the bodies into the River Euphrates. In the service of them, these holy passion-bearers are glorified as : the “All-Blessed” Theodore, the “Unconquered” Callistus, the “Valiant” Constantine, the “Wondrous” Theophilus, and “the Most Blessed” Basoes. Saint Aetius and Melissenus were also among the martyrs.

O Lord our God, your holy martyrs have deserved the crown of immortality on account of their good fight. Armed with your strength, they vanquished their persecutors and crushed Satan’s dreadful might. Through their supplications, O Christ our God, save our souls.

We bring crowns of glory to these newly appearing stars who manifested their faith by suffering for Christ. As real pillars and helpers of Christ’s reign, they pray to Him in behalf of all of us.

Brothers and sisters: By faith Moses, when he had grown up, refused to be known as the son of Pharaoh’s daughter; he wished to be ill-treated along with God’s people rather than enjoy the fleeting rewards of sin. Moses considered the reproach borne by God’s Anointed greater riches than the treasures of Egypt, for he was looking to the reward.

What more shall I recount?I have no time to tell of Gideon, Barak, Samson, Jephthah, of David and Samuel and the prophets, who by faith conquered kingdoms, did what was just, obtained the promises; they broke the jaws of lions; put out raging fires, escaped the devouring sword; though weak they were made powerful, became strong in battle, and turned back foreign invaders. Women received back their dead through resurrection. Others were tortured and would not receive deliverance, in order to obtain a better resurrection. Still others endured mockery, scourging, even chains and imprisonment. They were stoned; sawed in two, put to death at sword’s point; they went about garbed in the skins of sheep or goats, needy, afflicted, tormented. The world was not worthy of them. They wandered about in deserts and on mountains, they dwelt in caves and in holes of the earth. Yet despite the fact that all of these were approved because of their faith, they did not obtain what had been promised. God had made a better plan, a plan which included us. Without us, they were not to be made perfect.

Therefore, since we for our part are surrounded by this cloud of witnesses, let us lay aside every encumbrance of sin which clings to us and persevere in running the race which lies ahead; let us keep our eyes fixed on Jesus, who inspires and perfects our faith.

At that time Jesus wanted to set out for Galilee, but first he came upon Philip. “Follow me,” Jesus said to him. Now Philip was from Bethsaida, the same town as Andrew and Peter. Philip sought out Nathanael and told him, “We have found the one Moses spoke of in the law– the prophet too– Jesus, son of Joseph, from Nazareth.” Nathanael’s response to that was, “Can anything good come out of Nazareth?”  and Philip replied, “Come, see for yourself.” When Jesus saw Nathanael coming toward him, he remarked: “This man is a true Israelite. There is no guile in him.” “How do you know me?” Nathanael asked Jesus. “Before Philip called you,” Jesus answered, “I saw you under the fig tree.” “Rabbi,” said Nathanael, “you are the Son of God; you are the king of Israel.” Jesus responded: “Do you believe just because I told you I saw you under the fig tree? You will see much greater things than that.”

Jesus went on to tell them, “I solemnly assure you, you shall see the sky opened and the angels of God ascending and descending on the Son of Man.”