Nov. 25 Our Holy Fathers and Martyrs Clement, Pope of Rome and Peter, Bishop of Alexandria 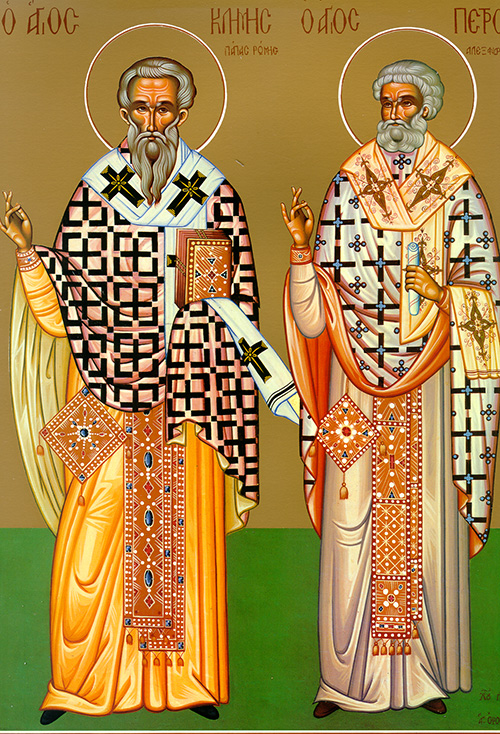 Our holy father Clement ruled the Church of Rome third after the blessed Peter the Apostle. He wrote an outstanding letter to the Corinthians to strengthen the peace and concord among themselves. The burial of his body on this day in Rome is honored, his relics having been restored to the Eternal City by Saints Cyril and Methodius after the saint’s death in 101.

Our holy father Peter came to the throne of Alexandria in the year 299, and died a martyr by the grave of the holy Apostle Mark in 311. He fought against Arius and his teaching, and drove him out of the city.

God of our fathers, You always deal with us in Your kindness. Take not your mercy away from us; but through their prayers guide our life in peace.

Heavenly and immovable pillars of the Church, heavenly and strong pillars of holiness, O Clement and Peter, save all of us through your prayers.

Brothers and sisters: We command you, in the name of the Lord Jesus Christ, to avoid any brother who wanders from the straight path and does not follow the tradition you received from us. You know how you ought to imitate us. We did not live lives of disorder when we were among you, not depend on anyone for food. Rather, we worked day and night, laboring to the point of exhaustion so as not to impose on any of you. Not that we had no claim on you, but that we might present ourselves as an example for you to imitate. Indeed, when we were with you we used to lay down the rule that anyone who would not work should not eat.

We hear that some of you are unruly, not keeping busy but acting like busybodies. We enjoin all such, and we urge them strongly in the Lord Jesus Christ, to earn the food they eat by working quietly.

You must never grow weary of doing what is right, brethren. If anyone will not obey our injunction, delivered through this letter, single him out to be ostracized that he may be ashamed of his conduct. But do not treat him like an enemy; rather, correct him as you would a brother.

May he who is the Lord of peace give you continued peace in every possible way. The Lord be with you all.

This greeting is in my own hand – Paul’s. I append this signature to every letter I write. May the grace of our Lord Jesus Christ be with you all.

The Lord told this parable: “A man of noble birth went to a faraway country to become its king, and then return. He summoned ten of his servants and gave them sums of ten units each saying to them, ‘Invest this until I get back.’ But his fellow citizens despised him, and they immediately sent a deputation after him with instructions to say, ‘We will not have this man rule over us.’ He returned, however, crowned as king. Then he sent for the servants to whom he had given the money, to learn what profit each had made. The first presented himself and said, ‘Lord, the sum you gave me has earned you another ten.’ ‘Good man!’ he replied. ‘You showed yourself capable in a small matter. For that you can take over ten villages.’ The second came and said, ‘Your investment, my lord, has netted you five.’ The king’s word to him was, ‘Take over five villages.’ The third came in and said: ‘Here is your money, my lord which I hid for safekeeping. You see, I was afraid of you because you are a hard man. You withdraw what you never deposited. You reap what you never sowed.’ To him the king said: ‘You worthless lout! I intend to judge you on your own evidence. You knew I was a hard man, withdrawing what I never deposited, reaping what I never sowed! Why, then, did you not put my money out on loan, so that on my return I could get it back with interest?’ The king said to those standing around, ‘Take from him what he has, and give it to the man with the ten.’ He responded with, ‘The moral is: whoever has will be given more, but the one who has not will lose the little he has. Now about those enemies of mine who did not want me to be king, bring them in and slay them in my presence.’”

Having spoken this, Jesus went ahead with his ascent to Jerusalem.