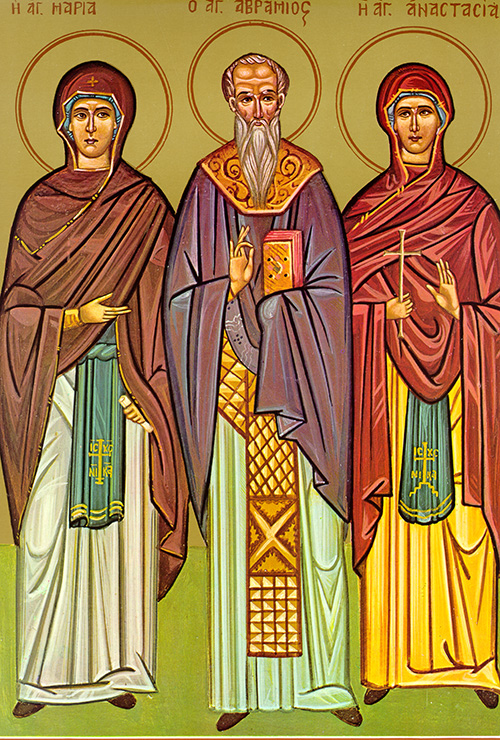 The holy venerable martyr Anastasia was born in Rome to wealthy parents, but she was left as an orphan at the age of three. She was taken to a women’s monastery to live, under the guidance of Hegumena Sophia. When she was seventeen, the pagan governor summoned her to defend herself, which she did with great eloquence. She was stripped, tortured, and finally mutilated by the guards. This was during the persecution of the emperor Decius (249-251).

Our venerable father Abraham the hermit married under pressure from his parents, but then he fled into the desert to live as a hermit. For fifty years he did so, faithfully keeping to the ascetic life which had called him. He died at the age of seventy in 360 at Edessa in Osrhoene in Mesopotamia. St. Ephraem the deacon recorded the deeds of this remarkable man.

Your lamb Anastasia, O Jesus, cries out in a loud voice: I love you, my Bridegroom; I seek You with painful longing; I am crucified with You; in Your baptism, I am buried with You; I suffer for You that I may reign with You; and I die for You that I may live with You. Receive me as a spotless sacrifice immolated with love for You. by her prayers, O merciful One, save our souls.

In you, O father, the divine image was strictly preserved; taking up your cross, you followed Christ. You taught us by example how to spurn the flesh, for it passes away, and how to care for the soul, which is immortal. Therefore, O venerable Abraham, your soul rejoices with the angels.

O venerable Anastasia, you were purified by the waters of virginity and washed by the blood of your martyrdom. Wherefore you grant healing to those who suffer from sickness, and salvation to those who come to you with love, for it is Christ who bestows upon you this power, Christ ever-generous with His grace.

In the body, you were like an angel on earth; and by your asceticism, you were like a tree well-planted: you grew in beauty, being watered with self-renunciation. Father Abraham, you exorcised the devil by your tears; wherefore you resembled a vessel of the Holy Spirit.

Brothers and sisters: Our hope being [the glory that endures], we act with full confidence. We are not like Moses, who used to hide his face with a veil so that the Israelites could not see the final fading of that glory. Their minds, or course, were dulled. To this very day, when the old covenant is read the veil remains unlifted; it is only in Christ that it is taken away. Even now, when Moses is read a veil covers their understanding. “But whenever one turns to the Lord, the veil will be removed.” The Lord is the Spirit, and where the Spirit of the Lord is, there is freedom. All of us, gazing on the Lord’s glory with unveiled faces, are being transformed from glory to glory into his very image by the Lord who is the Spirit.

The Lord said, “No one lights a lamp and puts it under a bushel basket or under a bed; he puts it on a lampstand so that whoever comes in can see it. There is nothing hidden that will not be exposed, nothing concealed that will not be known and brought to light. Take heed, therefore, how you hear: to the man who has, more will be given; and he who has not, will lose even the little he thinks he has.”

His mother and brothers came to be with him, but they could not reach him because of the crowd. He was told, “Your mother and your brothers are standing outside and they wish to see you.” He told them in reply, “My mother and my brothers are those who hear the word of God and act upon it.”