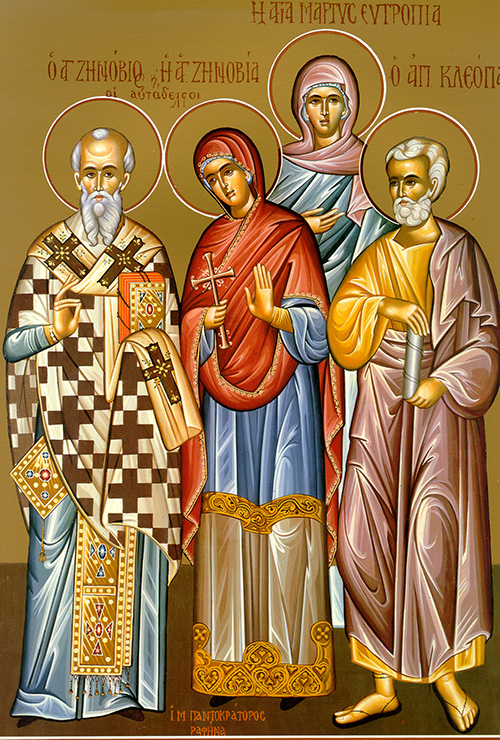 The holy martyr Zenobius was a priest who, in the severity of the persecution under the emperor Diocletian, urged others to martyrdom and himself was crowned with martyrdom. Zenobia, his sister, voluntarily joined Zenobius in his martyrdom in the year 285.

Let us honor with inspired hymns the two martyrs for truth and preachers of true devotion, Zenobius and wise Zenobia, brother and sister who lived and suffered together, and together received the incorruptible crown of martyrdom.

Brothers and sisters: Knowing that a man is not justified by legal observance but by faith in Jesus Christ, we too have believed in him in order to be justified by faith in Christ, not by observance of the law; for by works of the law no one will be justified. But if, in seeking to be justified in Christ, we are shown to be sinners, does that mean that Christ is encouraging sin? Unthinkable! If, however, I were to build up the very things I had demolished, I should then indeed be a transgressor. It was through the law that I died to the law, to live for God. I have been crucified with Christ, and the life I live now is not my own; Christ is living in me. I still live my human life, but it is a life of faith in the Son of God, who loved me and gave himself for me.

At that time when Jesus and his disciples came to the land of the Gerasenes which is opposite Galilee, they were met by a man from the town who was possessed by demons. For a long time he had not worn any clothes; he did not live in a house, but among the tombstones. On seeing Jesus he began to shriek; then the man fell at the feet of Jesus and exclaimed at the top of his voice, “Jesus, Son of God Most High, why do you meddle with me? Do not torment me, I beg you.” By now Jesus was ordering the unclean spirit to come out of the man. This spirit had taken hold of him many a time. The man used to be tied with chains and fetters, but he would break his bonds and the demon would drive him into places of solitude. “What is your name?” Jesus demanded. “Legion,” he answered, because the demons who had entered him were many. They pleaded with Jesus not to order them back to the abyss. It happened that a large herd of swine was feeding nearby on the hillside, and the demons asked Jesus to permit them to enter the swine. This he granted. The demons then came out of the man and entered the swine, and the herd charged down the bluff into the lake, where they drowned.

When the swineherds saw what had happened, they took to their heels and brought the news to the town and country roundabout. The people went out to see for themselves what had happened. Coming on Jesus, they found the man from whom the devils had departed sitting at the feet of Jesus dressed and in his full senses; this sight terrified them. They were told by witnesses how the possessed man had been cured. Shortly afterward, the entire population of Gerasene territory asked Jesus to leave their neighborhood, for a great fear had seized them; so he got into the boat and went back across the lake.

The man from whom the devils had departed asked to come with Jesus, but Jesus sent him away with the words, “Go back home and recount all that God has done for you.” The man went all through the town making public what Jesus had done for him.