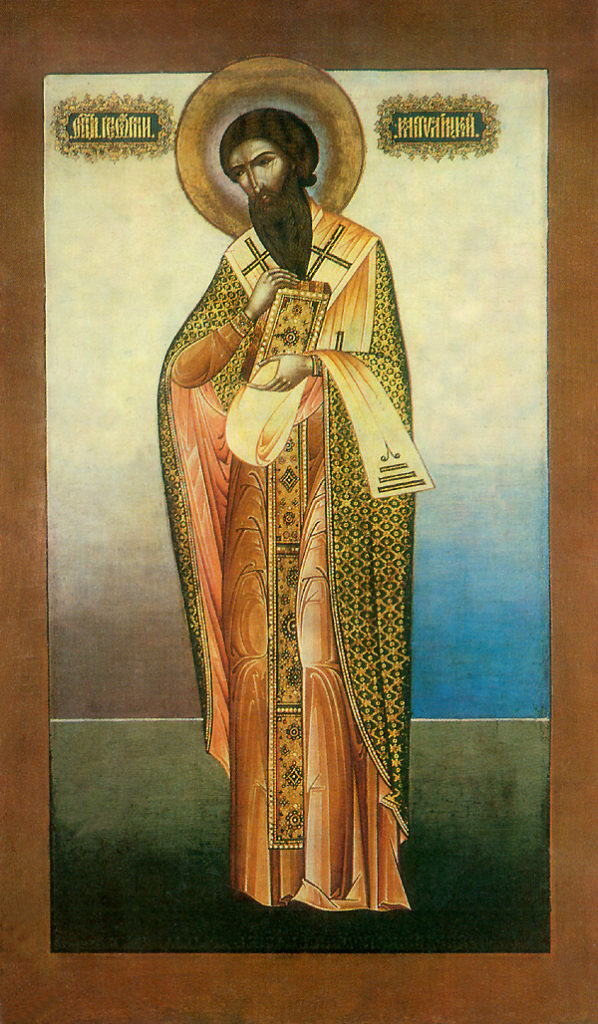 George was chosen and installed as Metropolitan of Mitylene for his great virtues, which he attained through ascetic labors. This saint governed his spiritual flock prudently and zealously to a great old age. When a persecution began under Leo the Armenian, who destroyed the holy icons, this saintly elder was summoned to Constantinople to an assembly of bishops whose intention, at the desire of the emperor, was to put a stop to the veneration of icons. George not only refused to carry out the wish of the wicked emperor, but with other courageous bishops stood up in defense of the holy icons. Not only was he mocked for this, but he was also exiled by the emperor to the region of Cherson. There he endured all sorts of physical afflictions and deprivations for the remaining years of his life. St. George died in about the year 816. Because of his great sanctity and love for the Lord Jesus, George was a great miracle-worker, both during his life and after his death.

In you, O holy father George, the faithful image of God shone forth, for you carried your cross and followed Christ. You taught by your deeds how to spurn the body, for it passes away; and how to value the soul, for it is immortal. Therefore, your soul is forever in happiness with the angels.

By the force of your meekness you were a source of light. You thoroughly beat down the revolt of devils, showing a spiritual bravery, O venerable father. In your great love you gave alms to the poor and food to the hungry. Upon your death you inherited an ageless reward, rejoicing until the end of time, O blessed bishop George. Beg Christ to forgive our sins, for we celebrate your holy memory with love.

When Israel set out on his journey with all that he had and came to Beer-sheba, he offered sacrifices to the God of his father Isaac. God spoke to Israel in visions of the night, and said, “Jacob, Jacob.” And he said, “Here I am.” Then he said, “I am God, the God of your father; do not be afraid to go down to Egypt, for I will make of you a great nation there. I myself will go down with you to Egypt, and I will also bring you up again; and Joseph’s own hand shall close your eyes.”

Then Jacob set out from Beer-sheba; and the sons of Israel carried their father Jacob, their little ones, and their wives, in the wagons that Pharaoh had sent to carry him. They also took their livestock and the goods that they had acquired in the land of Canaan, and they came into Egypt, Jacob and all his offspring with him, his sons, and his sons’ sons with him, his daughters, and his sons’ daughters; all his offspring he brought with him into Egypt.

My child, if your heart is wise, my heart too will be glad.

My soul will rejoice when your lips speak what is right.

Do not let your heart envy sinners, but always continue in the fear of the Lord.

Surely there is a future, and your hope will not be cut off.

Hear, my child, and be wise, and direct your mind in the way.

Do not be among winebibbers, or among gluttonous eaters of meat;

for the drunkard and the glutton will come to poverty, and drowsiness will clothe them with rags.

Listen to your father who begot you, and do not despise your mother when she is old.

Buy truth, and do not sell it; buy wisdom, instruction, and understanding.

The father of the righteous will greatly rejoice; he who begets a wise son will be glad in him.

Let your father and mother be glad; let her who bore you rejoice.

My child, give me your heart, and let your eyes observe my ways.

For a prostitute is a deep pit; an adulteress is a narrow well.

She lies in wait like a robber and increases the number of the faithless.

Who has woe? Who has sorrow?

Who has strife? Who has complaining?

Who has wounds without cause?

Who has redness of eyes?

Those who linger late over wine, those who keep trying mixed wines.

Do not look at wine when it is red, when it sparkles in the cup and goes down smoothly.

Your eyes will see strange things, and your mind utter perverse things.

When shall I awake? I will seek another drink.”

Do not envy the wicked, nor desire to be with them; for their minds devise violence, and their lips talk of mischief.

By wisdom a house is built, and by understanding it is established;

by knowledge the rooms are filled with all precious and pleasant riches.