Apr. 18 Our Venerable Father John, Disciple of the Holy Gregory the Decapolite 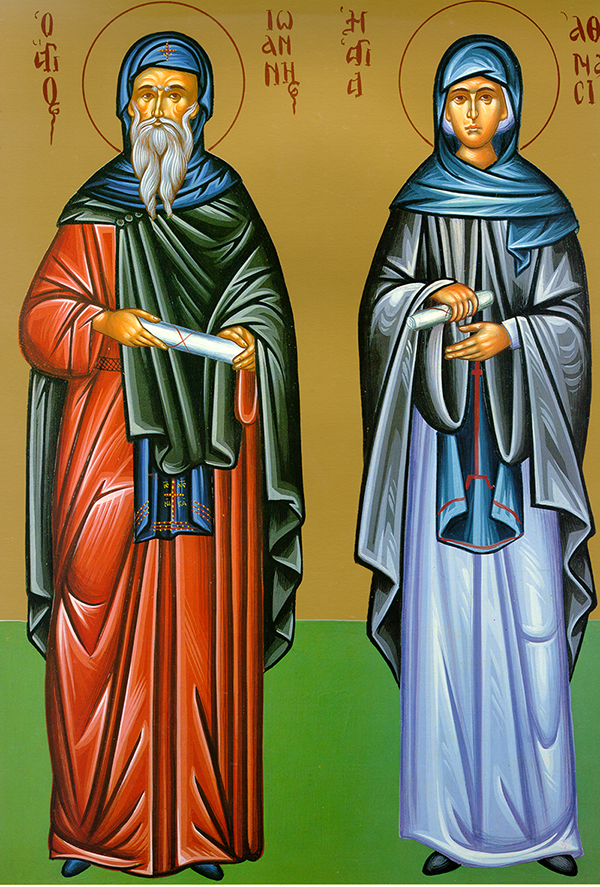 St. John was born at the end of the eighth century. At a young age he became a disciple of St. Gregory of Decapolis and accepted the monastic tonsure from him at the monastery in Thessalonica. Under the guidance of this experienced teacher, St. John attained great spiritual perfection. When the emperor Leo the Armenian (813-820) renewed the persecution against Orthodox Christians who venerated the holy icons, St. Gregory of Decapolis, St. Joseph the Hymnographer, and St. John went from Thessalonica to Constantinople to raise opposition to the Iconoclast heresy. In spite of the persecution, Saints Gregory and John fearlessly defended Orthodoxy for several years, and preached the veneration of icons. After many hardships, St. Gregory died (around 820), and soon after his faithful disciple John also departed for the Lord. St. Joseph the Hymnopgrapher transferred the relics of Saints Gregory and John and placed them in the church of St. Nicholas the Wonderworker.

In you, O holy father John, the faithful image of God shone forth, for you carried your cross and followed Christ. You taught by your deeds how to spurn the body, for it passes away; and how to value the soul, for it is immortal. Therefore, your soul is forever in happiness with the angels.

Adorning your life with chastity, O father, you disciplined your body. You overcame the attacks of the for, O blessed saint, and you presented yourself before God to enjoy the life of unending bliss as you so richly deserve, O John. Pray to the Lord for our salvation.

In those days they returned to Jerusalem from the mount called Olive near Jerusalem–a mere sabbath’s journey away. Entering the city, they went  to the upstairs room where they were staying: Peter and John and James and Andrew; Phillip and Thomas, Bartholomew and Matthew; James son of Alphaeus; SImon, the Zealot party member, and Judas son of James. Together they devoted themselves to constant prayer. There were some women in their company, and Mary the mother of Jesus, and his brothers.

At one point during those days, Peter stood up in the center of the brothers; there must have been a hundred and twenty gathered together. “Brothers,” he said, “the saying in Scripture uttered long ago by the Holy Spirit through the mouth of David was destined to be fulfilled in Judas, the one who guided those that arrested Jesus. He was one of our number and he had been given a share in this ministry of ours.

*”It is entirely fitting, therefore, that one of those who was of our company while the Lord Jesus moved among us, from the baptism of John until the day he was taken up from us, should be named as witness with us to his resurrection.” At that they nominated two, Joseph (called Barsabbas, also known as Justus) and Mathias. Then they prayed: “O Lord, you read the hearts of men. Make known to us which of these two you choose for this apostolic ministry, replacing Judas who deserted the cause and went the way he was destined to go.” They then drew lots between the two men. The choice fell to Matthias, who was added to the eleven apostles.

No one has ever seen God. It is God the only Son, ever at the Father’s side, who has revealed him. The testimony John gave when the Jews sent priests and Levites from Jerusalem to ask, “Who are you?” was the direct statement, “I am not the Messiah.” They questioned him further, “Who, then? Elijah?” “I am not Elijah,” he answered. “Are you the Prophet?” “No,” he replied. Finally they said to him: “Tell us who you are, so that we can give answer to those who sent us. What do you have to say for yourself?” John said, quoting the Prophet Isaiah, “I am ‘a voice in the desert, crying out: Make straight the way of the Lord!’” Those whom the Pharisees had sent proceeded to question John further: “If you are not the Messiah, nor Elijah, nor the Prophet, why do you baptize?” John answered them: “I baptize with water. There is one among you whom you do not recognize – the one who is to come after me – the strap of whose sandals I am not worthy to unfasten.” This happened in Bethany, across the Jordan, where John was baptizing.