Apr. 19 Our Venerable Father John of the Ancient Caves 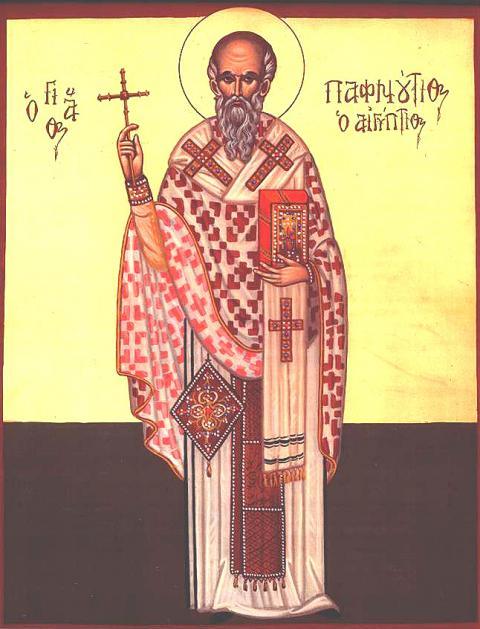 St. John of the Ancient Caves is so called because he lived in the Lavra of St. Chariton during the eighth century. This was called the “Old,” or ancient cave, since it was one of the oldest of the Palestinian monasteries. The Lavra was situated not far from Bethlehem, near the Dead Sea. In his early years, St. John went to venerate the holy places of Jerusalem, and settled at the Lavra, where he labored in fasting, vigil, and prayer. He was ordained to the holy priesthood, and glorified by his ascetic life.

In you, O holy father John, the faithful image of God shone forth, for you carried your cross and followed Christ. You taught by your deeds how to spurn the body, for it passes away; and how to value the soul, for it is immortal. Therefore, your soul is forever in happiness with the angels.

You gave up food, wealth, and fame, and you lived as a wander in the deserts. You withered your body by your abstinence, and with courage you passed your life in silence. For this we sing to you, O venerable model of virtue: Beg Christ our God to forgive the sins of those who lovingly cherish your memory.

In those days Peter stood up with the Eleven, raised his voice, and addressed them: “You who are Jews, indeed all of you staying in Jerusalem! Listen to what I have to say. You must realize that these men are not drunk, as you seem to think. It is only nine in the morning! No, it is what Joel the prophet spoke of: ‘It shall come to pass in the last days, says God, that I will pour out a portion of my spirit on all mankind: Your sons and daughters shall prophesy, your young men shall see visions and your old men shall dream dreams. Yes, even on my servants and handmaids I will pour out a portion of my spirit in those days, and they shall prophesy. I will work wonders in the heavens above and signs on the earth below: blood, fire, and a cloud of smoke. The sun shall be turned to darkness and the moon to blood before the coming of that great and glorious day of the Lord. Then shall everyone be saved who calls on the name of the Lord.’”

That same day two of the disciples were making their way to a village named Emmaus seven miles distant from Jerusalem, discussing as they went all that had happened. In the course of their lively exchange, Jesus approached and began to walk along with them. However, they were restrained from recognizing him. He said to them, “What are you discussing as you go your way?” They halted, in distress, and one of them, Cleopas by name, asked him, “Are you the only resident of Jerusalem who does not know the things that went on there these past days?” Jesus said to them, “What things?” They said: “All those that had to do with Jesus of Nazareth, a prophet powerful in word and deed in the eyes of God and all the people; how our chief priests and leaders delivered him up to be condemned to death, and crucified him. We were hoping that he was the one who would set Israel free. Besides all this, today, the third day since these things happened, some women of our group have just brought us some astonishing news. They were at the tomb before dawn and failed to find his body, but returned with the tail that they had seen a vision of angels who declared he was alive. Some other number went to the tomb and found it to be just as the women said, but him they did not see.”

Then Jesus said to them, “What little sense you have! How slow you are to believe all that the prophets have announced! Did not the Messiah have to undergo all this so as to enter into his glory?” Beginning, then, with Moses and all the prophets, Jesus interpreted for them every passage of Scripture which referred to him. By now they were near the village to which they were going, and Jesus acted as if he were going farther. But they pressed him: “Stay with us. It is nearly evening – the day is practically over.” So Jesus went in to stay with them.

When Jesus had seated himself with them to eat, he took bread, pronounced the blessing, then broke the bread and began to distribute it to them. With that their eyes were opened and they recognized him; whereupon he vanished from their site. They said to one another, “Were not our hearts burning inside us as he talked to us on the road and explained the Scriptures to us?” They got up immediately and returned to Jerusalem, where they found the Eleven and the rest of the company assembled. They were greeted with, “The Lord has been raised! It is true! He has appeared to Simon.“ Then they recounted what had happened on the road and how they had come to know Jesus in the breaking of the bread.