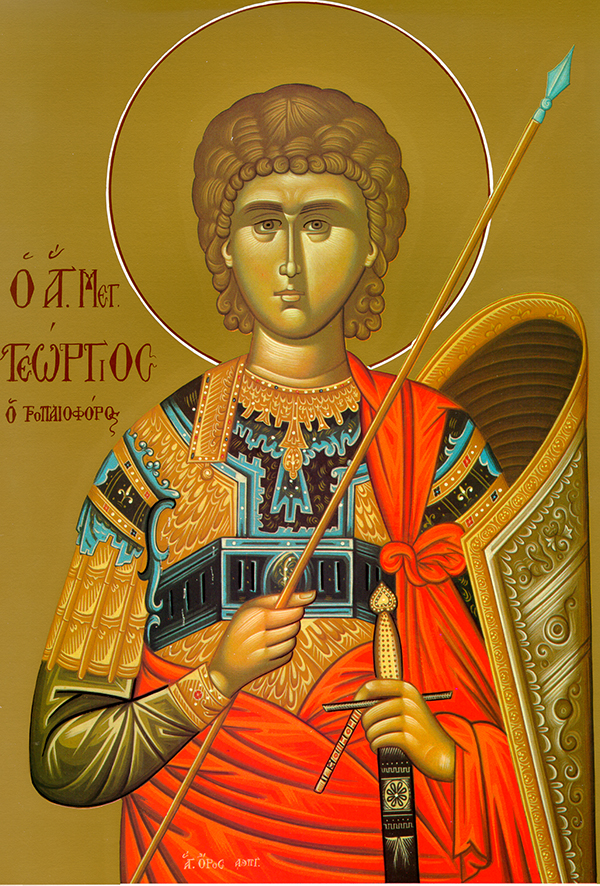 The Holy Great Martyr George the Victory-Bearer was a native of Cappadocia (a district in Asia Minor), and he grew up in a deeply believing Christian family. When he became a man, St. George entered into the service of the Roman army. He was handsome, brave and valiant in battle, and came to be noticed by the emperor Diocletian (284-305) and joined the imperial guard with the rank of comites, or military commander. Following the advice of the Senate at Nicodemedia, Diocletian gave all his governors full freedom in their court proceedings against Christians, and he promised them his full support. St. George, when he heard the decision of the emperor, distributed all his wealth to the poor, freed his servants, and then appeared in the Senate. The brave soldier of Christ spoke out openly against the emperor’s designs. He confessed himself a Christian, and appealed to all to acknowledge Christ: “I am a servant of Christ, my God, and trusting Him, I have come among you voluntarily, to bear witness concerning the Truth.” After many tortures and miraculous reprieves, St. George was finally beheaded after revealing the Truth of Christ to many, including the Empress Alexandra, who was martyred with him in the year 303.

You fought the good fight with faith, O George, a martyr of Christ. You exposed the perversion of the persecutors and offered an acceptable sacrifice to God. Therefore, you also received a crown of victory and through your prayers, O holy one, obtained the forgiveness of sins for all.

Reared by God, you were a noble sower of piety, harvesting sheaves of virtue. You sowed in tears but reaped in joy; and having honorably fought and given your blood, you were received by Christ. Through your prayers, O holy one, obtain the forgiveness of sins for all.

The Lord said to his disciples: “The command I give you is this, that you love one another. If you find that the world hates you, know that it has hated me before you. If you belonged to the world, it would love you as its own; the reason it hates you is that you do not belong to the world. But I chose you out of the world. Remember what I told you: no slave is greater than his master. They will harry you as they harried me. They will respect your words as much as they respected mine. All this they will do to you because of my name, for they know nothing of him who sent me. If I had not come to them and spoken to them, they would no be guilty of sin; now, however, their sin cannot be excused.

“To hate me is to hate my Father. Had I not performed such works among them as no one has ever done before, they would not be guilty of sin; but as it is, they have seen, and they go on hating me and my Father. However, this only fulfills the text of their law: ‘They hated me without cause.’ When the Paraclete comes, the Spirit of truth who comes from the Father – and whom I myself will send from the Father– he will bear witness on my behalf. You must bear witness as well, for you have been with me from the beginning.

In those days, as the man (who was cured) stood there clinging to Peter and John, the whole crowd rushed over to them excitedly in Solomon’s Portico. When Peter saw this, he addressed the people as follows: “Fellow Israelites, why does this surprise you? Why do you stare at us as if we had made this man walk by some power or holiness of our own? The God of Abraham, of Isaac, and of Jacob, the God of our fathers, has glorified his Servant Jesus, who you handed over and disowned in Pilate’s presence when Pilate was ready to release him. You disowned the Holy and Just One and preferred instead to be granted the release of a murdered. You put to death the Author of life. But God raised him from the dead, and we are his witnesses. It is his name, and trust in this name, that has strengthened the limbs of this man whom you see and know well. Such faith has given him perfect health, as all of you can observe.”

At that time Jesus and his disciples came into Judean territory, and he spent some time with them there baptizing. John who was baptizing at Aenon near Salim where the water was plentiful, and people kept coming to be baptized. (John, of course, had not yet been thrown in prison.) A controversy about purification arose between John’s disciples and a certain Jew. So they came to John, saying, “Rabbi, the man who was with you across the Jordan – the one about whom you have been testifying – is baptizing now, and everyone is flocking to him.”

John answered: “No one can lay hold on anything unless it is given him from on high. You yourselves are witnessed to the fact that I said: ‘I am not the Messiah; I am sent before him.’ It is the groom who has the bride. The groom’s best man waits there listening for him and is overjoyed to hear his voice. That is my joy, and it is complete. He must increase, while I must decrease. The One who comes from above is above all; the one who is of the earth is earthly, and he speaks on an earthly plane. The One who comes from heaven (who is above all) testifies to what he has seen and heard, but no one accepts his testimony. Whoever does accept his testimony certifies that God is truthful.”