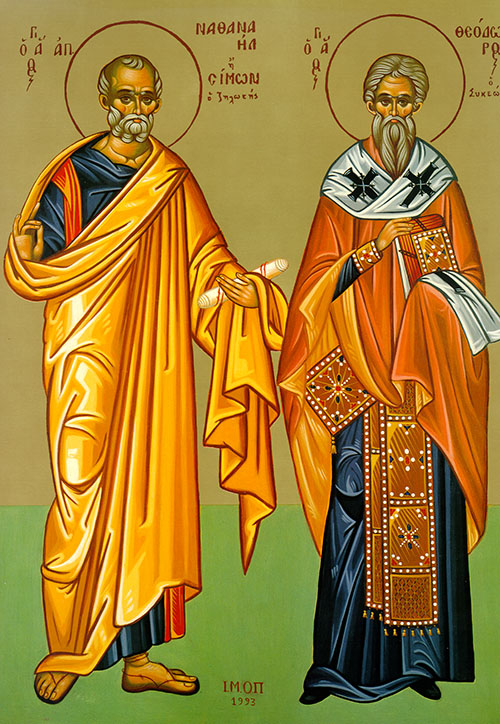 St. Theodore the Sykeote was born in the mid-sixth century in the village of Sykeon, not far from the city of Anastasiopolis. When his mother, Maria, conceived the saint, she had a vision of a bright star overshadowing her womb. A clairvoyant elder, whom she consulted, explained that this was the grace of God being poured forth on the baby in her womb. When the boy reached the age of six, his mother presented him with a golden belt, since she intended that her son should become a soldier. That night the Holy Martyr George appeared to her in a dream, and he told her not to consider military service for her son because the boy was destined to serve God. When he was older, St. Theodore went to venerate the holy places in Jerusalem, and there at the Chozeba Lavra near Jordan, he received monastic tonsure. As bishop, St. Theodore toiled much for the welfare of the Church, but his soul yearned for solitary communion with God. After several years he went again to venerate the holy places in Jerusalem. And there, concealing his identity, he settled at the Lavra of Saint Sava, where he lived in solitude from the Nativity of Christ until Pascha. St. Theodore departed for the Lord in the year 610.

Having followed the path of the holy from your youth, you became a vessel full of graces. You graced the world with miracles, O priestly Theodore, and you cast out many devils. Now pray to the Lord for all of us.

Ascending by virtue as if in a chariot of fire, you took up your abode in heaven, O God-bearer. You lived on earth like an angel in the flesh, and now you sing praises with angels in heaven. You became a heavenly fount of miracles, O Theodore.

In those days, when Peter and John were going up to the temple for prayer at the three o’clock hour, a man crippled from birth was being carried in. They would bring him every day and put him at the temple gate called “the Beautiful” to beg from the people as they entered. When he saw Peter and John on their way in, he begged them for an alms. Peter fixed his gaze on the man; so did John. “Look at us!” Peter said. The cripple gave them his whole attention, hoping to get something. Then Peter said: “I have neither silver nor gold, but what I have I give to you! In the name of Jesus Christ the Nazorean, walk!” Then Peter took him by the right hand and pulled him up. Immediately the beggar’s feet and ankles became strong; he jumped up, stood for a moment, and began to walk around. He went into the temple with them-walking, jumping about, and praising God.

At that time Jesus went down to Capernaum, along with his mother and brothers (and his disciples) but they stayed there only a few days.

As the Jewish Passover was near, Jesus went up to Jerusalem. In the temple precincts he came upon people engaged in selling oxen, sheep and doves, and others seated changing coins. He made a kind of whip of cords and drove sheep and oxen alike out of the temple area, and knocked over the moneychangers’ tables, spilling their coins. He told those who were selling doves: “Get them out of here! Stop turning my Father’s house into a marketplace!” His disciples recalled the words of Scripture: “Zeal for your house consumes me.”

At this the Jews responded, “What sign can you show us authorizing you to do these things?” Jesus answered: “Destroy this temple and in three days raise it up.” They retorted, “This temple took forty-six years to build, and you are going to ‘raise it up in three days’!” Actually Jesus was talking about the temple of his body. Only after Jesus had been raised from the dead did his disciples recall that he had said this, and come to believe the Scripture and the word he had spoken.