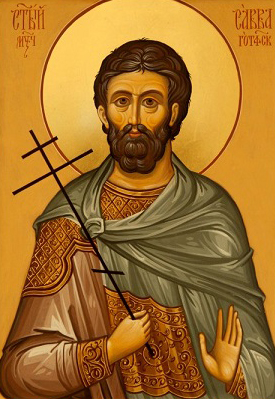 St. Sabbas Stratelates came from a Gothic tribe. For his bravery, he attained the high rank of military commander, or “stratelates,” and he served under the Roman emperor Aurelian (270-275). From his youth, Sabbas was a Christian and he fervently followed the commands of Christ. He helped the needy, and visited Christians in prison. Because of his pure and virtuous life, the saint received from the Lord the gift of wonderworking, healing the sick, and cast out demons in the name of Christ. When the emperor learned that St. Sabbas was a Christian, he demanded that he apostatize. The martyr threw down his military belt and declared that he would not forsake his faith. They beat him, burned him with torches, and threw him into a cauldron with tar, but the martyr remained unharmed. Looking in at his torments, seventy soldiers came to believe in Christ. They were beheaded by the sword. St. Sabbas was thrown in prison. At midnight, while he was praying, Christ appeared before the martyr and shone on him the light of His Glory. The Savior bade him not to fear, but to stand firm. Encouraged, the Martyr Sabbas underwent new torture in the morning and was drowned in a river in 272.

Casting off the robes of dignity and honor, O martyr, you confessed Christ before the torturer, the evil king. For this you were subjected to great sufferings, O glorious one, and you obtained a crown of victory from the King of all. You have been placed among heaven’s legions. Therefore, pray for the salvation of our souls, O Sabbas.

Showing yourself an invincible Goth, you slayed the barbarians. Enduring a martyrdom of extreme cruelty, you crushed legions of unseen devils. You assumed a crown of victory, O blessed Sabbas, and we ask you to intercede with Christ for us.

In those days, through the hands of the apostles, many signs and wonders occurred among the people. By mutual agreement, they used to meet in Solomon’s Portico. No one else dared to join them, despite the fact that the people held them in great esteem. Nevertheless more and more be;ievers, men and women in great numbers, were continually added to the Lord. The people carried the sick into the streets and laid them on cots and mattresses, so that when Peter passed by at least his shadow might fall on one or another of them. Crowds from the towns around Jerusalem would gather, too, bringing their sick and those who were troubled by unclean spirits, all of whom were cursed.

The high priest and all his supporters (that is, the party of Sadducees), filled with jealousy, arrested the apostles and threw them into the public jail. During the night, however, an angel of the Lord opened the gates of the jail, led them forth, and said, “Go out now and take your place in the temple precincts and preach to the people all about this new life.”

On the evening of that first day of the week, even though the disciples had locked the doors of the place where they were for fear of the Jews, Jesus came and stood before them. “Peace be with you,” he said. When he had said this, he showed them his hands and his side. At the sight of the Lord the disciples rejoiced. “Peace be with you,” he said again.

“As the Father has sent me, so I send you.” Then he breathed on them and said: “Receive the Holy Spirit. If you forgive men’s sins, they are forgiven them; if you hold them bound, they are held bound.”

It happened that one of the Twelve, Thomas (the name means, “Twin”), was absent when Jesus came. The other disciples kept telling him: “We have seen the Lord!” His answer was, “I will never believe it without probing the nailprints in his hands, without putting my finger in the nailmarks and my hand into his side.”

A week later, the disciples were once more in the room, and this time Thomas was with them. Despite the locked doors, Jesus came and stood before them. “Peace be with you,” he said to them; then, to Thomas: “Take your finger and examine my hands. Put your hand into my side. Do not persist in your unbelief, but believe!” Thomas said in response, “My Lord and my God!” Jesus then said to him: “You became a believer because you saw me. Blest are they who have not seen and have believed.”

Jesus performed many other signs as well – signs not recorded here – in the presence of his disciples. But these have been recorded to help you believe that Jesus is the Messiah, the Son of God, so that through his faith you may have life in his name.