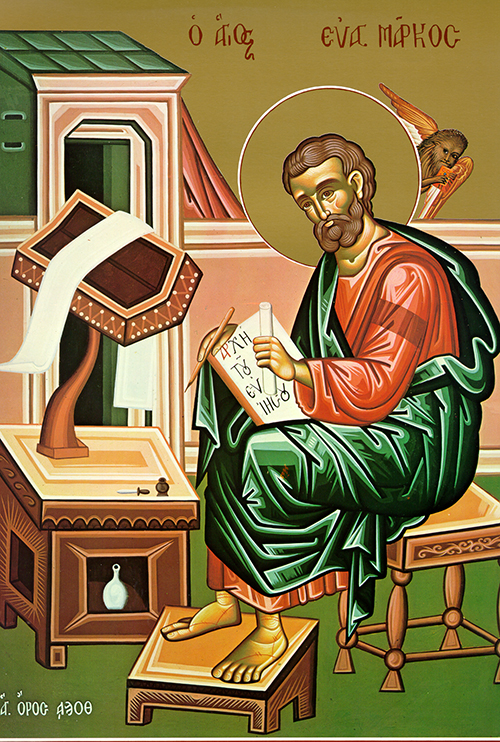 The Holy Apostle and Evangelist Mark, also known as John Mark (Acts 12:12), was one of the Seventy Apostles, and also the nephew of St. Barnabas. He was born in Jerusalem. The house of his mother Mary adjoined the Garden of Gethsemane. After the Ascension of the Lord, the mouse of his mother Mary became a place where Christians gathered, and a place of lodging for some of the Apostles (Acts 12:12). St. Mark was a very close companion of the Apostles Peter and Paul and Barnabas. St. Mark was at Seleucia with Paul and Barnabas, and from there he set off to the island of Cyprus, and he traversed the whole of it from east to west. In the city of Paphos, St. Mark witnessed the blinding of the sorcerer Elymas by St. Paul (Acts 13: 6-12). After working with the Apostle Paul, St. Mark returned to Jerusalem, and then went to Rome with the Apostle Peter. From there, he set out for Egypt, where he established a local Church. Finally, he founded the Church of Alexandria.

You became an apostle to Christ through the teaching of Peter, and you traveled like the sun over foreign lands. You fathered the Alexandrians in Christ, O blessed saint, and, by you, Egypt was set free from her mistakes. You guide us all like a beacon, O Mark, voice of God. You are a pillar of the Church by your gospel teaching. We rejoice in this and keep your memory. Intercede with God, who proclaims the Gospel through you, to forgive us our many sins.

Receiving the grace of the Spirit from heaven, you silenced the babble of the orators, O apostle. You attracted the pagans by preaching of the Gospel and led them to your Master, O blessed Mark.

Brothers and sisters: Bow humbly under God’s mighty hand, so that in due time he may lift you high. Cast all your cares on him because he cares for you. Stay sober and alert. Your opponent the devil is prowling like a roaring lion looking for someone to devour. Resist him, solid in your faith, realizing that the brotherhood of believers is undergoing the same sufferings throughout the world. The God of all grace, who called you to his everlasting glory in Christ, will himself restore, confirm, strengthen, and establish those who have suffered a little while. Dominion be his throughout the ages! Amen.

I am writing briefly through Silvanus, whom I take to be a faithful brother to you. Herewith are expressed my encouragement and my testimony that this is the true grace of God. Be steadfast in it. The church that is in Babylon, chosen together with you, sends you greeting, as does Mark my son. Greet one another with the embrace of true love. Peace to all of you who are in Christ.

At that time Jesus summoned the Twelve and began to send them out two by two, giving them authority over unclean spirits. He instructed them to take nothing on the journey but a walking stick–no food, no traveling bag, not a coin in the purse in their belts. They were, however, to wear sandals. “Do not bring a second tunic,” he said, and added: “Whatever house you find yourself in, stay there until you leave the locality. If any place will not receive you or hear you, shake your dust from your feet in testimony against them as you leave.” With that they went off, preaching the need of repentance. They expelled many demons, anointed the sick with oil, and worked many cures.

In those days, Peter addressed the people: “Reform your lives! Turn to God, that your sins may be wiped away! Thus may a season of refreshment be granted to you by the Lord when he sends you Jesus, already designated as your Messiah. Jesus must remain in heaven until the time of universal restoration which God spoke of long ago through his holy prophets.” For Moses said: ‘The Lord God will raise up for you a prophet like me from among your own kinsmen: you shall listen to him in everything he says to you. Anyone who does not listen to that prophet shall be ruthlessly cut off from the people.’

“Moreover, all the prophets who have spoken, from Samuel onward, have announced the events of these days. You are the children of those prophets, you are the heirs of the covenant God made with your fathers when he said to Abraham, ‘In your offspring, all the families of the earth shall be blessed.’ When God raised up his servant, he sent him to you first to bless you by turning you from your evil ways.”

At that time there was a wedding feast at Cana in Galilee, and the mother of Jesus was there. Jesus and his disciples had likewise been invited to celebration. At a certain point the wine ran out, and Jesus’ mother told him, “There is no more wine.” Jesus replied, “Woman, how does this concern of yours involve me? My hour has not yet come.” His mother instructed those waiting on table, “Do whatever he tells you.” As prescribed for Jewish ceremonial washings, there were at hand six stone water jars, each one holding fifteen to twenty-five gallons. “Fill those jars with water,” Jesus ordered, at which they filled them to the brim. “Now,” he said, “draw some out and take it to the waiter in charge.”They did as he instructed them. The waiter in charge tasted the water made wine, without knowing where it had come from; only the waiters knew, since they had drawn the water. Then the waiter in charge called the groom over and remarked to him: “People usually serve the choice wine first; then when the guests have been drinking awhile, a lesser vintage. What you have done is keep the choice wine until now.” Jesus performed this first of his signs at Cana in Galilee. Thus did he reveal his glory, and his disciples believed in him.