Apr. 30 The Holy Apostle James, Brother of John the Theologian 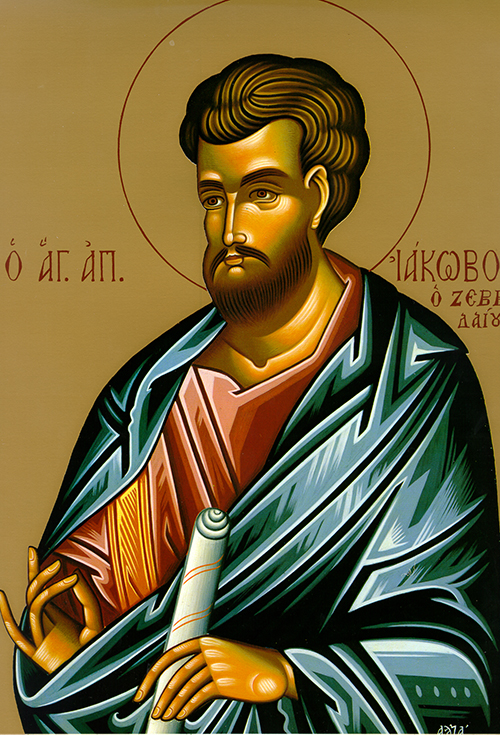 The Holy Apostle James, son of Zebedee, was the brother of St. John the Theologian, and one of the Twelve Apostles. He and his brother, St. John, were called to be Apostles by our Lord Jesus Christ, Who called them the “Sons of Thunder” (Mark 3:17). It was this James, with John and Peter, who witnessed the Raising of the daughter of Jairus, the Lord’s Transfiguration on Mount Tabor, and His agony in the Garden of Gethsemane. After the Descent of the Holy Spirit, St. James preached in Spain and other lands before returning to Jerusalem. He openly and boldly preached Jesus Christ as the Savior of the world, and he denounces the Pharisees and the Scribes with the words of Holy Scripture, reproaching them for their malice of heart and unbelief.

You were an apostle of Christ and the beloved of John. O praiseworthy James, obtain absolution for those who sing the praises of your memory and find mercy for our souls.

O glorious James, when you heard the Divine Word calling you, you put aside your love for your father and hurried to Christ with your brother, John. Therefore, both of you were made worthy to see the divine Transfiguration of the Lord.

At that time as Jesus stood by the Lake of Gennesaret, and the crowd pressed in on him to hear the word of God, he saw two boats moored by the side of the lake; the fishermen had disembarked and were washing their nets. He got into one of the boats, the one belonging to Simon, and asked him to pull out a short distance from the shore; then, remaining seated, he continued to teach the crowds from the boat. When he had finished speaking he said to Simon, “Put out into deep water and lower your nets for a catch.” Simon answered, “Master, we have been hard at it all night long and have caught nothing; but if you say so, I will lower the nets.” Upon doing this they caught such a great number of fish that their nets were at the breaking point. They signaled to their mates in the other boats to come and help them. These came, and together they filled the two boats until they nearly sank.

At the sight of this, Simone Peter fell at the knees of Jesus saying, “Leave me, Lord. I am a sinful man.” For indeed, amazement at the catch they had made seized him and all his shipmates, as well as James and John, the sons of Zebedee, who were partners with Simon. Jesus said to Simon, “Do not be afraid. From now on you will be catching men.” With that they brought their boats to land, left everything, and became his followers.

In those days, the apostles went into the temple at dawn and resumed their teaching. When the priest and his supporters arrived they convoked the Sanhedrin, the full council of the elders of Israel. They sent word to the jail that the prisoners were to be brought in. But when the temple guard got to the jail they could not find them, and hurried back with the report, “We found the jail securely locked and the guards at their posts outside the gates, but when we opened it we found no one inside.”

On hearing this report, the captain of the temple guard and the high priests did not know what to make of the affair. Someone then came up to them, pointing out, “Look, there! Those men you put in jail are standing over there in the temple, teaching the people.” At that, the captain went off with the guard and brought them in, but without any show of force, for fear of being stoned by the crowd. When they let them in and made them stand before the Sanhedrin, the high priest began the interrogation in this way: “We gave you strict orders not to teach about that name, yet you have filled Jerusalem with your teaching and are determined to make us responsible for that man’s blood.” To this, Peter and the apostles replied: “Better for us to obey God than men! The God of our fathers has raised up Jesus whom you put to death, hanging him on a tree. He whom God has exalted at his right hand as ruler and Savior is to bring repentance to Israel and forgiveness of sins. We testify to this. So too does the Holy Spirit, whom God has given to those that obey him.” When the Sanhedrin heard this, they were stung to fury and wanted to kill them.

At that time when the people saw the sign Jesus had performed they began to say, “this is undoubtedly the prophet who is to come into the world.” At that, Jesus realized that they would come and carry him off to make him king, so he fled back to the mountain alone.

As evening drew on, his disciples came down to the lake. They embarked, intending to cross the lake toward Capernaum. By this time it was dark, and Jesus had still not joined them; moreover, with a strong wind blowing the sea was becoming rough. Finally, when they had a road three or 4 miles, they say to Jesus approaching the boat, walking on the water. They were frightened, but he told them, “It is I; do not be afraid.” They wanted to take him into the boat, but suddenly it came aground on the shore they had been approaching.

The crowd remained on the other side of the lake. The next day they realized that there had been only one boat there and that Jesus had not left in it with his disciples; rather, they had set out by themselves. Then some boats came out from Tiberias near the place where they had eaten the bread after the Lord had given thanks. Once the crowd saw that neither Jesus nor his disciples were there they too embarked in the boats and went to Capernaum looking for Jesus.

When they found him on the other side of the lake, they said to him, “Rabbi, when did you come here?” Jesus answered them: “I assure you, you are not looking for me because you have seen signs but because you have eaten your fill of the loaves. You should not be working for perishable food but for food that remains unto life eternal, food which the Son of Man will give you; it is on him that God the Father has set his seal.”