Apr. 29 The Nine Martyrs of Cyzice & Our Venerable Father Memnon the Wonderworker 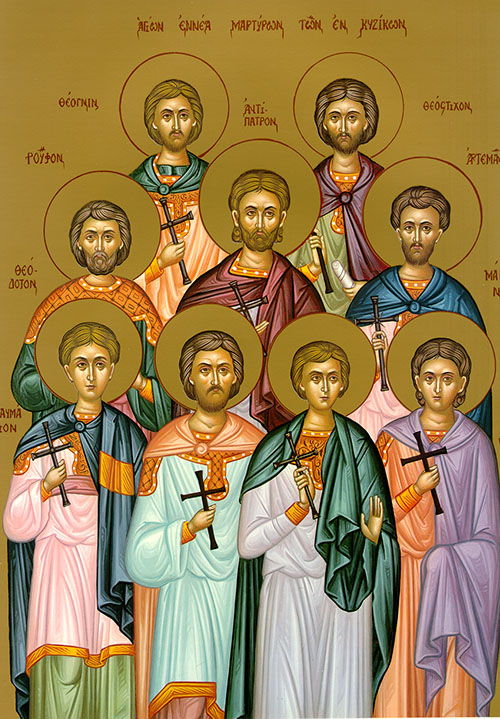 The nine holy martyrs of Cyzice burned with a love for Christ. These martyrs refused to offer sacrifice to idols or deny Christ as their Lord. They were cruelly tortured and finally beheaded in the third century.

Our venerable father Memnon the Wonderworker was from early days devoted to fasting and prayer, and became a great wonder-worker for his people. He was a Roman centurion, converted to the faith by St. Severus, and was martyred in the days of Diocletian and Maximian in the third century.

Troparion for the martyrs

In you, O holy father Memnon, the faithful image of God shone forth, for you carried your cross and swallowed Christ. You taught by your deeds how to spurn the body, for it passes away; and how to value the soul, for it is immortal. Therefore, your soul is forever in happiness with the angels.

Kontakion for the martyrs

See the strong and glorious choir of nine martyrs, the men who professed the Trinity of triple glory. As their trial began they exclaimed: We offer You our bodies and souls as a sacrifice poured out in our blood, O Master. Since You are merciful, O Master, number us among the saints.

We praise you as a brilliant star, O blessed Memnon. You brighten the world by your virtue and miracles. You approached the Unapproachable, and so we praise the Savior as we keep your memory.

In those days, a man named Ananias and his wife Sapphira sold a piece of property. With the connivance of his wife he put aside a part of the proceeds for himself; the rest he took and laid at the feet of the apostles. Peter exclaimed:” Ananias, why have you let Satan fill your heart so as to make you lie to the Holy Spirit and keep for yourself some of the proceeds from that field? Was it not yours so long as it remained unsold? Even when you sold it, was not the money still yours? How could you ever concoct such a scheme? You have lied not to men but to God!” At the sound of these words, Ananias fell dead. Great fear came upon all who later heard of it. Some of the young men came forward, wrapped up the body, and carried it out for burial. Three hours later Ananias’ wife came in, unaware of what had happened. Peter said to her, “Tell me, did you sell that piece of property for such and such an amount?” She answered, “Yes, that was the sum.” Peter replied, “How could you two scheme to put the Spirit of the Lord to the test? The footsteps of these men who have just buried your husband can be heard at the door. They stand ready to carry you out too.” At that, she fell dead at his feet. The young men came in, found her dead, and carried her out for burial beside her husband. Great fear came on the whole church and on all who heard it.

The Lord said, “I cannot do anything myself. I judge as I hear and my judgment is honest because I am not seeking my own will but the will of him who sent me. If I witness on my own behalf, you cannot verify my testimony; but there is another who is testifying on my behalf, and the testimony he renders me I know can be verified. You have sent to John, who has testified to the truth. (Not that I myself accept such human testimony – I refer to these things only for your salvation.)

“He was the lamp, set aflame and burning bright, and for a while you exulted willingly in his light. Yet I have testimony greater than John’s, namely, the works the Father has given me to accomplish. These works which I perform testify on my behalf that the Father has sent me. Moreover, the Father who sent me has himself given testimony on my behalf. His voice you have heard, his form you have never seen, neither do you have his word abiding in your hearts because you do not believe the One he has sent. Search the Scriptures in which you think you have eternal life — they also testify on my behalf. Yet you are unwilling to come to me to possess that life.

“ It is not that I accept human praise — it is simply that I know you, and you do not have the love of God in your heart. I have come in my Father’s name, yet you do not accept me. But let someone come in his own name and him you will accept. How can people like you believe, when you accept praise from one another you do not seek the glory that comes from the One (God)? Do not imagine that I will be your accuser before the Father; the one to accuse you is Moses on whom you have such your hopes. If you believed Moses you would then believe me, for it was about me that he wrote. But if you do not believe what he wrote, how can you believe what I say?”

Later on, Jesus crossed the Sea of Galilee to the shores of Tiberias; a vast crowd kept following him because they saw the signs he was performing for the sick.