Aug. 02 Translation of the Relics of the Holy Proto-Martyr and Archdeacon Stephen; Our Venerable Father Basil, Fool for Christ 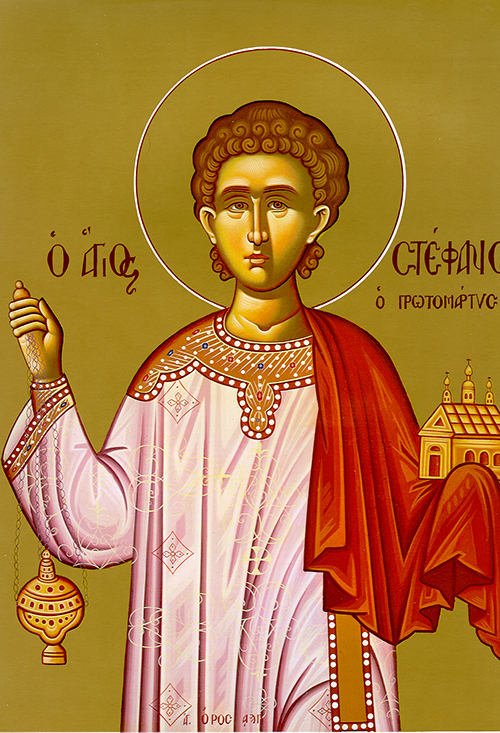 Tradition says that the body of St. Stephen was taken by the Rabbi Gamaliel, a secret disciple of Christ, and buried in a cave in the town of Capargamala. In the year 415, Gamaliel appeared in a dream to the priest Lucian in that town, and revealed the burial place of the Protomartyr. His relics were translated from Palestine to Constantinople.

Our venerable father Basil of Moscow, was a Fool-for-Christ in the late 15th and early 16th centuries. He came from a humble household, and was training to be a cobbler. At sixteen he went to Moscow to live his life as Fool for Christ. Purified by his great deeds and prayers of his souls, St. Basil was granted the gift of foreseeing the future. His holiness was renowned throughout the land, even after his death in 1557. The veneration of St. Basil the Blessed was always so strong that the Trinity temple, where the saint is buried, and the attached Protection church were renamed for him: the famous St. Basil’s Cathedral in Moscow.

O martyr Stephen, your head was crowned with a kingly crown on account of all the struggles you endured for Christ our God. You beheld the vision of your Savior seated at the right hand of God. Do not cease to intercede with Him for the salvation of our souls.

Readings for the Protomartyr

Stephen was a man filled with grace and power, who worked great wonders and signs among the people. Certain members of the so-called “Synagogues of Roman Freedom” (that is, the Jews from Cyrene, Alexandria, Cilicia, and Asia) would undertake to engage Stephen in debate, but they proved no match for the wisdom and spirit with which he spoke. They persuaded some men to make the charge that they had heard him speaking blasphemies against Moses and God, and in this way they incited the people, the elders, and the scribes. All together they confronted him, seized him, and led him off to the Sanhedrin. There they brought in false witnesses, who said: “This man never stops making statements against the holy place and the law. We have heard him claim that Jesus the Nazorean will destroy this place and change the customs which Moses handed down to us.” The members of the Sanhedrin who sat there stared at him intently. Throughout, Stephen’s face seemed like that of an angel.

The high priest asked whether the charges were true. To this Stephen replied: “My brothers! Fathers! Listen to me. The God of glory appeared to our father Abraham when he was still in Mesopotamia and before he settled in Haran. God said to him, Leave your country and your kinsfolk, and go to the land I will show you. So he left the land of the Chaldeans and settled in Haran. After Abraham’s father died, God made him move from there to this land where you now dwell. God did not give him any of it as his heritage, not even a foot of land.

“You stiff-necked people, uncircumcised in heart and ears, you are always opposing the Holy Spirit just as your fathers did before you. Was there ever any prophet whom your fathers did not persecute? In their day, they put to death those who foretold the coming of the Just One; now you in your turn have become his betrayers and murderers. You who received the law through the ministry of angels have not obeyed it.”

Those who listened to his words were stung to the heart; they ground their teeth in anger at him. Stephen meanwhile, filled with the Holy Spirit, looked to the sky above and saw the glory of God, and Jesus standing at God’s right hand. “Look!” he exclaimed, “I see an opening in the sky, and the Son of Man standing at God’s right hand.” The onlookers were shouting aloud, holding their hands over their ears as they did so. Then they rushed at him as one man, dragged him out of the city, and began to stone him. The witnesses meanwhile were oiling their cloaks at the feet of a young man named Saul. As Stephen was being stoned he could be heard praying, “Lord Jesus, receive my spirit.” He fell to his knees and cried out in a loud voice, “Lord, do not hold this sin against them.” And with that he died.

The Lord said to the chief priests and the elders of the people, “Listen to another parable. There was a property owner who planted a vineyard, put a hedge around it, dug out a vat, and erected a tower. Then he leased it out to tenant farmers and went on a journey. When vintage time arrived he dispatched his slaves to the tenants to obtain his share of the grapes. The tenants responded by seizing the slaves. They beat one, killed another, and stoned a third. A second time he dispatched even more slaves than before, but they treated them the same way. Finally he sent his son to them, thinking, ‘They will respect my son.’ When they saw the son, the tenants said to one another, ‘Here is the one who will inherit everything. Let us kill him and then we shall have his inheritance!’ With that they seized him, dragged him outside the vineyard, and killed him. What do you suppose the owner of the vineyard will do to those tenants when he comes?”

Brothers and sisters: The body is one and has many members, but all the members, many though they are, are one body; and so it is with Christ. It was in one Spirit that all of us, whether Jew or Greek, slave or free, were baptized into one body. All of us have been given to drink of the one Spirit. Now the body is not one member, it is many. If the foot should say, “Because I am not the hand I do not belong to the body,” would it then no longer belong to the body? If the ear should say, “Because I am not an eye I do not belong to the body,” would it no longer belong to the body? If the body were all eye, what would happen to our hearing? If it were all ear, what would happen to our smelling? As it is, God has set each member of the body in the place he wanted it to be. If all the members were alike, where would the body be? There are, indeed, many different members, but one body. The eye cannot say to the hand, “I do not need you,” any more than the head can say to the feet, “I do not need you.” Even those members of the body which seem less important are in fact indispensable. We honor the members we consider less honorable by clothing them with greater care, thus bestowing on the less presentable a propriety which the more presentable already have. God has so constructed the body as to give greater honor to the lowly members, that there be no dissension in the body, but that all the members may be concerned for one another. If one member suffers, all the members suffer with it; if one member is honored, all the members share its joy.

Then Peter came up and asked him, “Lord, when my brother wrongs me, how often must I forgive him? Seven times?” “No,” Jesus replied, “not seven times; I say, seventy times seven times.”

When Jesus had finished this discourse, he left Galilee and came to the district of Judea across the Jordan. Great crowds followed him and he cured them there.

At one point, children were brought to him so that he could place his hands on them in prayer. The disciples began to scold them, but Jesus said, “Let the children come to me. Do not hinder them. The kingdom of God belongs to such as these.” And he laid his hands on their heads before he left that place.