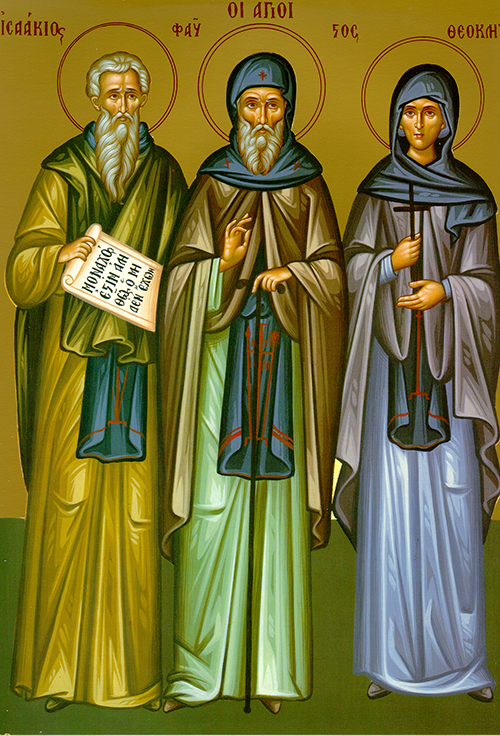 Our venerable fathers Isaac, Dalmatus, and Faustus: Dalmatus was an officer in the Roman army who abandoned all and entered the monastery where Isaac was abbot. His only son, Faustus, entered with him. Dalmatus followed Isaac as heguman of the monastery, and took part in the Third Ecumenical Council (431), battling against the Nestorian heresy.

The holy Salome the myrrh-bearer was the mother of the apostles James and John, the wife of Zebedee, and she served the Lord during his earthly life, and was made worthy to be among the first bearers of the tidings of His resurrection.

God of our fathers, You always deal with us in Your kindness. Take not Your mercy away from us; but through their prayers guide our life in peace.

Let us praise with hymns Isaac and with him Dalmatus, and Faustus shining as stars in heaven, who dispelled heresies with their faith. Since they are Christ’s servants, they intercede with Him for the salvation of all of us.

Brothers and sisters: Love is patient; love is kind. Love is not jealous, it does not put on airs, it is not snobbish. Love is never rude, it is not self-seeking, it is not prone to anger; neither does it brood over injuries. Love does not rejoice in what is wrong but rejoices with the truth. There is no limit to love’s forbearance, to its trust, its hope, its power to endure.

Seek eagerly after love. Set your hearts on spiritual gifts – above all, the gift of prophecy. A man who speaks in a tongue is talking not to men but to God. No one understands him, because he utters mysteries on the Spirit. The prophet, on the other hand, speaks to men for their up-building, their encouragement, their consolation. He who speaks in a tongue builds up himself, but he who prophesies builds up the church. I should like it if all of you spoke in tongues, but I much prefer that you prophesy. The prophet is greater than one who speaks in tongues, unless the speaker can also interpret for the up-building of the church.

The Lord told this parable: “The reign of God is like the case of the owner of an estate who went out at dawn to hire workmen for his vineyard. After reaching an agreement with them for the usual daily wage, he sent them out to his vineyard. He came out about midmorning and saw other men standing around the marketplace without work, so he said to them, ‘You too go along to my vineyard and I will pay you whatever is fair.’ At that they went away. He came out again around noon and midafternoon and did the same. Finally, going out in the late afternoon he found still others standing around. To these he said, ‘Why have you been standing here idle all day?’ ‘No one hired us,’ they told him. He said, ‘You go to the vineyard too.’

“When evening came the owner of the vineyard said to his foreman, ‘Call the workmen and give them their pay, but begin with the last group first.’ When those hired late in the afternoon came up they received a full day’s pay, and when the first group appeared they supposed they would get more; yet they received the same daily wage. ‘This last group did only an hour’s work, but you have put them on the same basis as us who have worked a full day in the scorching heat.’ ‘My friend,’ he said to one in reply, ‘I do you no injustice. You agreed on the usual wage, did you not? Take your pay and go home. I intend to give this man who was hired last the same pay as you. I am free to do as I please with my money, am I not? Or are you envious because I am generous?’ Thus the last shall be first and the first shall be last.”