Aug. 06 The Transfiguration of Our Lord, God, and Savior Jesus Christ 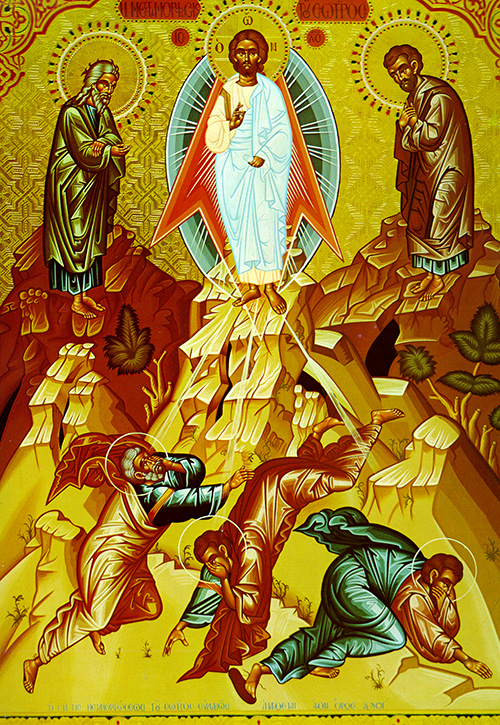 The Transformation of Our Lord, God, and Savior Jesus Christ in which Jesus Christ, beloved and only-begotten Son of the eternal Father, manifested his glory in the presence of the holy Apostles Peter, James, and John, with the Law and the prophets bearing witness in the persons of Moses and Elijah. This was done so that, while sharing the servile humility of our state he might intimate our glorious restoration through grace. Thus it might be announced to the ends of the earth that the image of God, in which humanity was created, even as it was corrupted in Adam, would be restored in Christ.

You were transfigured on the mountain, O Christ our God, revealing as much of Your glory to Your disciples as they could behold.  Through the prayers of the Theotokos, let Your everlasting light shine upon us singers. O Giver of Light, glory to You!

You were transfigured on the mountain, O Christ our God, and Your disciples beheld as much of Your glory as they could bear, that when they would see You crucified they would understand that You suffered willingly, so they would preach to the world that You are truly the radiance of the Father.

Brothers and sisters, be solicitous to make your call and election permanent; surely those who do so will never be lost. On the contrary, your entry into the everlasting kingdom of our Lord and Savior Jesus Christ will be richly provided for.

I intend to recall these things to you constantly, even though you already understand and are firmly rooted in the truth you possess. I consider it my duty, as long as I live, to prompt you with this reminder. I know, by the indications our Lord Jesus Christ has given me, how close is the day when I must fold my tent. I shall press to have you recall these things frequently after my departure. It was not by way of cleverly concocted myths that we taught you about the coming in power of our Lord Jesus Christ, for we were eyewitnesses of his sovereign majesty. He received glory and praise from God the Father when that unique declaration came to him out of the majestic splendor: “This is my beloved Son, on whom my favor rests.” We ourselves heard this said from heaven while we were in his company on the holy mountain. Besides, we possess the prophetic message as something altogether reliable. Keep your attention closely fixed on it, as you would on a lamp shining in a dark place until the first streaks of dawn appear and the morning star rises in your hearts.

At that time Jesus took Peter, James, and his brother John and led them up on a high mountain by themselves. He was transfigured before their eyes. His face became as dazzling as the sun, his clothes as radiant as light. Suddenly Moses and Elijah appeared to them conversing with Jesus. Then Peter said to Jesus, “Lord, how good that we are here! With your permission I will erect three booths here, one for you, one for Moses, and one for Elijah.” He was still speaking when suddenly a bright cloud overshadowed them. Out of the cloud came a voice which said, “This is my beloved Son on whom my favor rests. Listen to him.” When they heard this the disciples fell forward on the ground, overcome with fear. Jesus came toward them and laying his hand on them, said, “Get up! Do not be afraid.” When they looked up they did not see anyone but Jesus. As they were coming down the mountainside Jesus commanded them, “Do not tell anyone of the vision until the Son of Man rises from the dead.”

At that time Jesus called his disciples to him and said: “My heart is moved with pity for the crowd. By now they have been with me for three days, and have nothing to eat. I do not wish to send them away hungry, for fear they may collapse on the way.” His disciples said to him, “How could we ever get enough bread in this deserted spot to satisfy such a crowd?” But Jesus asked them, “How many loaves of bread do you have?” “Seven,” they replied, “and a few small fish.” Then he directed the crowd to seat themselves on the ground. He took the seven loaves and the fish, and after giving thanks he broke them and gave them to the disciples, who in turn gave them to the crowds. All ate until they were full. When they gathered up the fragments left over, these filled seven hampers. The people who were fed numbered four thousand, apart from women and children. Then, after he had dismissed the crowds, he got into the boat and went to the district of Magadan.