Aug. 5 The Holy Martyr Eusignius; Prefestive Day of the Transfiguration 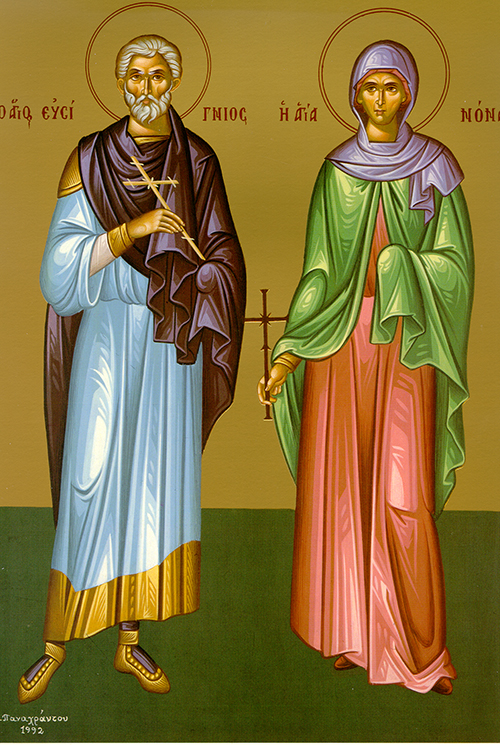 The holy martyr Eusignius was a soldier under emperors Maximian, Constantine, and Constantine’s sons. Having spent sixty years in military service, he withdrew and went home to Antioch, where he lived a life of good works, prayer, and fasting. In the year 362, during the time of the emperor Julian the Apostate, he was arrested and beheaded.

Let us go forth to welcome the Transfiguration of Christ; let the faithful joyfully anticipate the feast and exclaim: the day of divine gladness has arrived; the Lord ascends Mount Tabor and the beauty of His divinity flashes like lightning.

Your martyr Eusignius, O Lord our God, in his struggle received an incorruptible crown from You. With Your strength, he brought down the tyrants and broke the cowardly valor of demons. Through his prayers, O Christ our God, save our souls.

Today all mortal nature radiates divinity at the divine Transfiguration and cries out with gladness: Christ is transfigured, saving all.

Let us praise Eusignius the martyr who conquered evil by the power of Christ. He clearly proclaimed his faith and was subjected to vicious torments. But he vanquished the harshness of the torturer and received a victor’s crown from God Himself.

Brothers and sisters: When you assemble, one has a psalm, another some instruction to give, still another a revelation to share; one speaks in a tongue, another interprets. All well and good, so long as everything is done with a constructive purpose. If any are going to talk in tongues let it be at most two or three, each in turn, with another to interpret what they are saying. But if there is no one to interpret, there should be silence in the assembly, each one speaking only to himself and to God. Let no more than two or three prophets speak, and let the rest judge the worth of what they say. If another, sitting by, should happen to receive a revelation, the first ones should then keep quiet. You can all speak your prophecies, but one by one, so that all may be instructed and encouraged. The spirits of the prophets are under their prophets’ control, since God is a God, not of confusion, but of peace.

According to the rule observed in all the assemblies of believers, women should keep silent in such gatherings. They may not speak. Rather, as the law states, submissiveness is indicated for them. If they want to learn anything, they should ask their husbands at home. It is a disgrace when a woman speaks in the assembly. Did the preaching of God’s word originate with you? Are you the only ones to whom it has come?

If anyone thinks he is a prophet or a man of the Spirit, he should know what I have written you is the Lord’s commandment. If anyone ignores it, he in turn should be ignored. Set your hearts on prophecy, my brethren, and do not forbid those who speak in tongues, but make sure that everything is done properly and in order.

At that time, Jesus entered the temple precincts and drove out all those engaged there in buying and selling. He overturned the money-changers’ tables and the stalls of the dove-sellers, saying to them: “Scripture has it, ‘My house shall be called a house of prayer,’ but you are turning it into a den of thieves.”

The blind and the lame came to him inside the temple area and he cured them.

With that, Jesus left them and went out of the city to Bethany, where he spent the night. At dawn, as Jesus was returning to the city, he felt hungry. Seeing a fig tree by the roadside he went over to it, but found nothing there except leaves. He said to it, “Never again shall you produce fruit!”; and it withered up instantly.

The disciples were dumbfounded when they saw this. They asked, “Why did the fig tree wither up so quickly?”