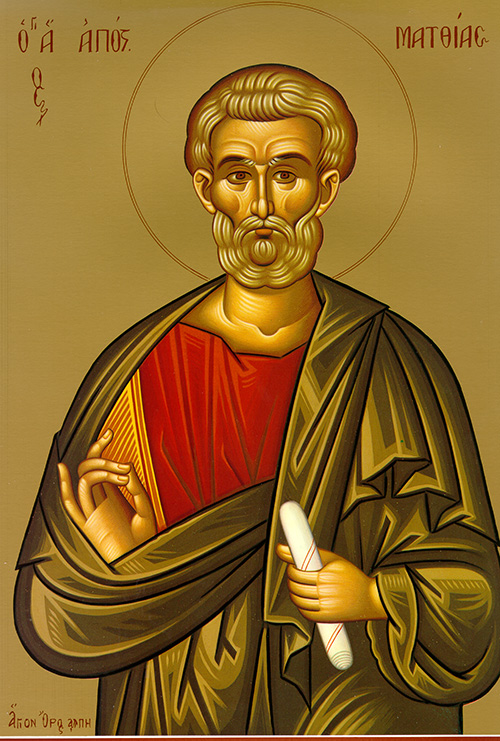 The holy apostle Matthias was born of the tribe of Judah, in Bethlehem. He studied with St. Simeon the God-receiver in Jerusalem. When the Lord went out to preach the Kingdom of God, Matthias joined the others who loved the Lord- for he himself loved Him with all his heart, and heard His words and witnessed His works with delight. Initially Matthias was numbered among the seventy lesser disciples of Christ. However, following the Resurrection of the Lord, the place of Judas being empty, the apostles drew lots and chose Matthias as one of the Twelve Great Apostles (Acts 1:23-26). Receiving the Holy Spirit on Pentecost, Matthias set out to preach the Gospel; first in Judah, and then in Ethiopia, where he endured great tortures for the sake of Christ. It is held that he preached throughout Macedonia, where they wanted to blind him; but he became invisible to his torturers, and thus escaped danger. The Lord appeared to him in prison, encouraged him, and freed him. Finally, he returned again to his work in Judea. There he was accused and brought to court before the high priest Ananias, before whom he fearlessly witnessed Christ. Ananias (the same who had slain the Apostle James) condemned Matthias to death. They led Matthias out, stoned him, and then decapitated him with an ax. This punishment was the Roman manner of killing a person who was sentenced to death, and the hypocritical Jews applied this method to Matthias to show he had been an enemy of Rome. Thus the great apostle of Christ reposed, and took up his habitation in the eternal joy of his Lord.

O holy Apostle Matthias, intercede with the merciful God that He may grant our souls forgiveness of sins.

Your good tidings were more brilliant than the sun, and they have spread all over the world; they illumine the Church of the Gentiles with grace. Rejoice, O miracle-working apostle Matthias.

In those days they returned to Jerusalem from the mount called Olive near Jerusalem–a mere sabbath’s journey away. Entering the city, they went  to the upstairs room where they were staying: Peter and John and James and Andrew; Phillip and Thomas, Bartholomew and Matthew; James son of Alphaeus; Simon, the Zealot party member, and Judas son of James. Together they devoted themselves to constant prayer. There were some women in their company, and Mary the mother of Jesus, and his brothers.

At one point during those days, Peter stood up in the center of the brothers; there must have been a hundred and twenty gathered together. “Brothers,” he said, “the saying in Scripture uttered long ago by the Holy Spirit through the mouth of David was destined to be fulfilled in Judas, the one who guided those that arrested Jesus. He was one of our number and he had been given a share in this ministry of ours.

“It is entirely fitting, therefore, that one of those who was of our company while the Lord Jesus moved among us, from the baptism of John until the day he was taken up from us, should be named as witness with us to his resurrection.” At that they nominated two, Joseph (called Barsabbas, also known as Justus) and Mathias. Then they prayed: “O Lord, you read the hearts of men. Make known to us which of these two you choose for this apostolic ministry, replacing Judas who deserted the cause and went the way he was destined to go.” They then drew lots between the two men. The choice fell to Matthias, who was added to the eleven apostles.

At that time Jesus called the Twelve together and gave them the power and authority to overcome all demons and to cure diseases. He sent them forth to proclaim the reign of God and heal the afflicted. Jesus advised them: “Take nothing for the journey, neither walking staff nor traveling bag; no bread, no money. No one is to have two coats. Stay at whatever house you enter and proceed from there. When people will not receive you, leave that town and shake its dust from your feet as a testimony against them.” So they set out and went from village to village, spreading the good news everywhere and curing diseases.

Brothers and sisters: If the dead are not raised, what about those who have themselves been baptized on behalf of the dead? If the raising of the dead is not a reality, why be baptized on their behalf? And why are we continually putting ourselves in danger? I swear to you, brothers and sister, by the very pride you take in me, which I cherish in Christ Jesus our Lord, that I face death every day. If I fought those beasts in Ephesus for purely human motives, what profit was there for me? If the dead are not raised, [Scripture says] “Let us eat and drink, for tomorrow we die!” Do not be led astray any longer. “Bad company corrupts good morals.” Return to reason, as you ought, and stop sinning. Some of you are quite ignorant of God; I say it to your shame.

Perhaps someone will say, “How are the dead to be raised up? What kind of body will they have?” A nonsensical question! The seed you sow does not germinate unless it dies. When you sow, you do not sow the full blown plant, but a kernel of wheat or some other grain. God gives body to it as he pleases – to each seed its own fruition.

At that time Jesus entered the temple precincts, and while he was teaching, the chief priests and elders of the people came up to him and said: “On what authority are you doing these things? Who has given you this power?” Jesus answered: “I too will ask a question. If you answer it for me, then I will tell you on what authority I do the things I do. What was the origin of John’s baptism? Was it divine or merely human?” They thought to themselves, “If we say ‘divine,’ he will ask us, ‘Then why did you not put faith in it?’; while if we say ‘merely human,’ we shall have reason to fear the people, who all regard John as a prophet.” So their answer to Jesus was, “We do not know.” He said in turn, “Then neither will I tell you on what authority I do the things I do.”