Aug. 10 The Holy Martyr and Archdeacon Lawrence of Rome 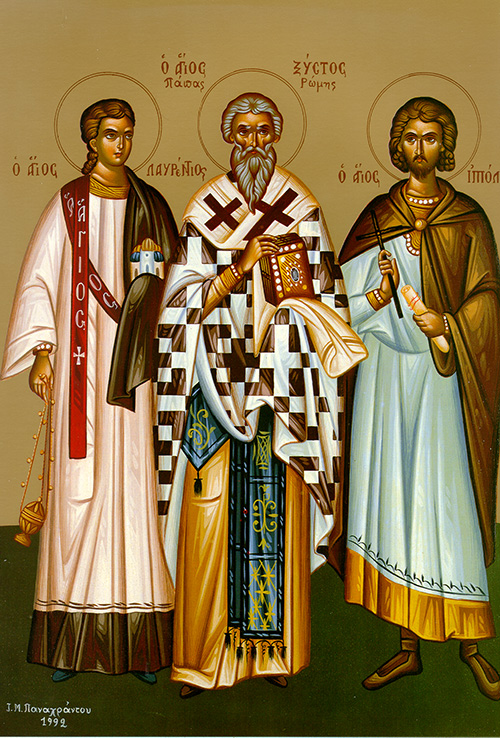 The holy martyr Lawrence was the Archdeacon for Pope Sixtus in Rome, and they suffered together in the year 258 under during the reign of the emperor Valerian (253-260). When St. Sixtus was arrested, he entrusted the treasures of the church with St. Lawrence to distribute to the poor. He went around the city on foot, helping clergy and impoverished Christians who were in hiding. When Valerian heard of these treasures, he had Lawrence brought before him, and demanded Lawrence give them to him. Instead of earthly treasure, Lawrence brought the emperor the poor, saying, “Behold the treasures of the Church.” He was thrown in prison, suffered many tortures, and received the unfading crown of martyrdom through fire.

Your martyr Lawrence, O Lord our God, in his struggle received an incorruptible crown from You. With Your strength, he brought down the tyrants and broke the cowardly valor of demons. Through his prayers, O Christ our God, save our souls.

Inflaming your heart with heavenly fire, you turned the fires of passion into cold ashes. O God-bearing martyr Lawrence, strength of martyrs, amid all your sufferings you cried out: Nothing shall separate me from the love of Christ.

Brothers and sisters: It is fitting that I should go myself [to take your gift to Jerusalem, those whom you have chosen for the task] will accompany me.

I shall come to you after I have passed through Macedonia. If it is at all possible, I should like to remain with you for some time – even to spend the winter with you – that you may provide me with what I need for the rest of my journey. I do not want to see you just in passing. I hope to spend some time with you, if the Lord permits. I intend to stay in Ephesus until Pentecost. A door has been opened wide for my work, but at the same time there are many opposed. If Timothy should come, be sure to put him at ease among you. He does the Lord’s work just as I do, so let no one treat him disdainfully. Rather, help him come to me by sending him on his way in peace. I am expecting him with the brethren. As for our brother Apollos, I urged him strongly to go to you with the brethren, but he did not wish to go at this time. He will go when circumstances are more favorable.

The Lord said to the chief priests and the elders of the people: “What do you think of this case? There was a man who had two sons. He approached the elder and said, ‘Son, go and work in the vineyard today.’ The son replied, ‘I am on my way sir’; but never went. Then the man came to his second son and said the same thing. This son said in reply, ‘No, I will not’; but afterward he regretted it and went. Which of the two did what the father wanted?” They said, “The second.” Jesus said to them, “Let me make clear that tax collectors and prostitutes are entering the kingdom of God before you. When John came preaching a way of holiness, you put no faith in him; but the tax collectors and prostitutes did believe in him. Yet even when you saw that, you did not repent and believe him.”