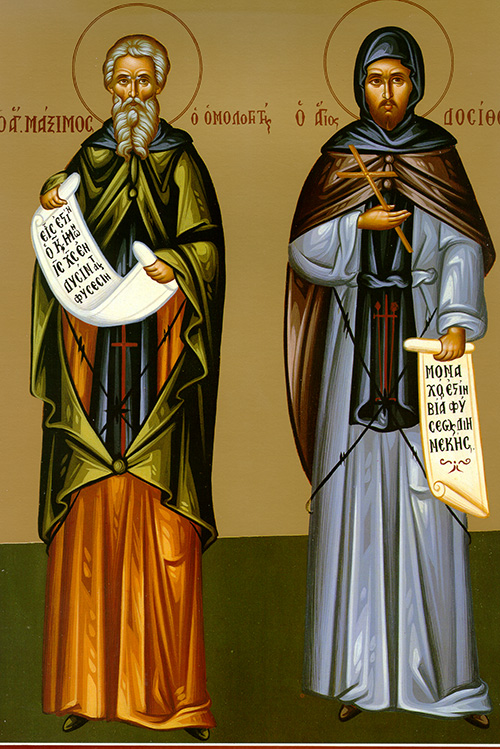 Our venerable father Maximos the Confessor was the hegumen of Chrysopolis near Constantinople. He was notable for his teaching and zeal for the Catholic truth. When he vigorously fought against the Monothelites, he had his right hand cut off by the heretical emperor Constans. Along with two of his disciples, both named Anastasius, after a harsh imprisonment and many tortures, Maximos was exiled to the region of Lazica and rendered his spirit to God in the year 662.

Guide to Orthodoxy, teacher of piety and holiness, luminary for the world, inspired adornments of monks, O wise Maximos, harp of the Spirit, you enlightened with Christ our God to save our souls.

Taking its abode within your heart, the thrice-brilliant light made you a chosen vessel. It has revealed heavenly things in you, O blessed saint. You made deep and complicated ideas clear to us, and you preached the eternal Trinity to everyone, O Maximos.

Brothers and sisters, I beg you, for the sake of our Lord Jesus Christ and the love of the Spirit, join me in the struggle by your prayers to God on my behalf. Pray that I may be kept safe from the unbelievers in Judea, and that the offerings I bring to Jerusalem may be well received by the saints there; so that, God willing, I may come to you with joy and be refreshed in spirit by your company. May the God of peace be with you all. Amen.

At that time the collectors of the temple tax approached Peter and said, “Does your master not pay the temple tax?” “Or course he does,” Peter replied. Then Jesus on entering the house asked, without giving him time to speak: “What is your opinion, Simon? Do the kings of the world take tax or tolls from their sons, or foreigners?” When Peter replied, “From foreigners,” Jesus observed: “Then their sons are exempt. But for fear of disedifying the collectors go to the lake, throw in a line, and take out the first fish you catch. Open its mouth and you will discover there a coin worth twice the temple tax. Take it and give it to them for you and me.”

Just then the disciples came up to Jesus with the questions, “Who is of greatest importance in the kingdom of God?” Jesus called a little child over and stood him in their midst and said: “I assure you, unless you change and become like little children, you will not enter the kingdom of God. Whoever makes himself lowly, becoming like this child, is of greatest importance in that heavenly reign.”