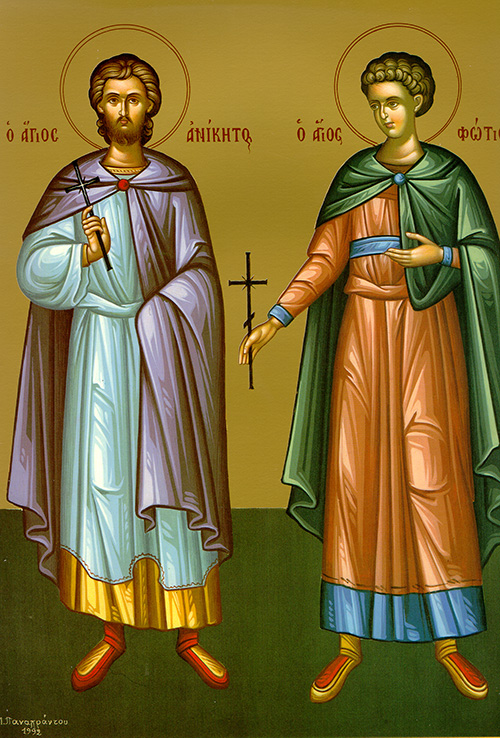 The holy martyrs Photius and Anicetus bore witness to the Christian faith before the emperor Diocletian(284-305). Both of them were tortured, and then imprisoned for three years. Eventually they were thrown into an enormous burning furnace in the year 305.

Your martyrs, O Lord our God, in their struggles received their incorruptible crowns from You. With Your strength, they brought down the tyrants and broke the cowardly valor of demons. Through their prayers, O Christ our God, save our souls.

You crushed the rage of vicious torturers by your brave endurance of their torments. Now you rejoice in the courts of heaven, O blessed martyrs Photius and Anicetus. You are blessed forever and ever, praying for those who honor you.

Brothers and sisters: Conscience gives testimony to the boast that in our behavior toward all and especially toward you we have always acted from God-given holiness and candor; this has been prompted, not by debased human wisdom, but by God’s goodness. We never write anything that you cannot read and understand. I hope that, just as you know us to a certain degree already, you will in time come to know us well, and will recognize that we shall be your boast, and you ours, on the day of our Lord Jesus.

Confident as I am about this, I wanted to visit you first so that a double grace might be yours. I planned to visit you, both on my way to Macedonia and on my return, that I might receive your help on my journey to Judea. DO you suppose that in making those plans I was acting insincerely? Or that my plans are so determined by self-interest that I change my mind from one minute to the next? As God keeps his word, I declare that my word to you is not “yes” one minute and “no” the next. Jesus Christ, whom Silvanus, Timothy, and I preached to you as Son of God, was not alternately “yes” and “no”; he was never anything but “yes.” Whatever promises God has made have been fulfilled in him; therefore it is through him that we address our Amen to God when we worship together.

At that time some Sadducees, who hold there is no resurrection, came to Jesus with a question: “Teacher, Moses declared, ‘If a man dies without children, his brother must take the wife and produce offspring for his brother.’ Once there were seven brothers. The eldest died after marrying, and since he had no children, left his wife to his brother. The same thing happened to the second, the third, and so on, down to the seventh. Last of all the woman died too. At the resurrection, whose wife will she be, since all seven of them married her?” Jesus replied: “You are badly misled because you fail to understand the Scriptures and the power of God. When people rise from the dead, they neither marry nor are given in marriage but live like angels in heaven. As to the fact that the dead are raised, have you not read what God said to you, ‘I am the God of Abraham, the God of Isaac, the God of Jacob’? He is the God of the living, not of the dead.” The crowds who listened were spellbound by his teaching.