Aug. 14 The Holy Prophet Micah; Translation of the Relics of Our Father Theodosius, Hegumen of the Monastery of the Caves; Prefestive day of the Dormition of the Theotokos 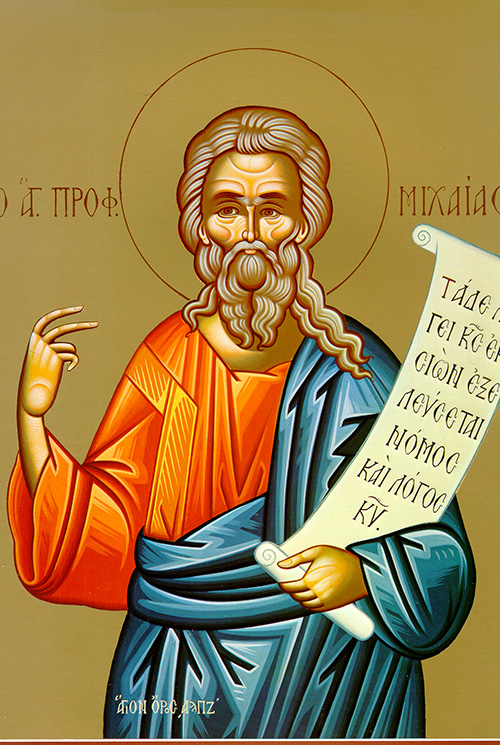 The holy prophet Micah was of the tribe of Judah and from the village of Morasth. He was a contemporary of the prophets Isaiah, Amos, and Hosea. He denounced the vices of the people, foretold the fall of Samaria, and was a seer of the coming Messiah. He named Bethlehem as the birthplace of the Messiah. He was buried in his own village, and his relics were found in the 4th century.

St. Theodosius of the Caves was the Father of monasticism in Russia. At the age of twenty-four, he secretly left his parental home and St. Anthony at the Kiev Caves monastery blessed him to receive monastic tonsure with the name Theodosius. The saint was not afraid to denounce the mighty of this world. Those unjustly condemned always found a defender in him, and judges would review matters at the request of the igumen. He was particularly concerned for the destitute. He built a special courtyard for them at the monastery where anyone in need could receive food and drink. Sensing the approach of death, St. Theodosius peacefully fell asleep in the Lord in the year 1074. He was buried in a cave which he dug, where he secluded himself during fasting periods. The relics of the ascetic were found incorrupt in the year 1091. St. Theodosius was numbered among the saints in 1108.

As we celebrate the memory of your prophet Micah, O Lord, we implore You to save our souls through his prayers.

Guide to Orthodoxy, teacher of piety and holiness, luminary for the world, inspired adornments of monks, O wise Theodosius, Harp of the Spirit, you enlightened all by your teachings; intercede with Christ our God to save our souls.

Celebrating your glorious memory today, the world mystically dances for joy and cries out to you, O Theotokos: Rejoice, Virgin, Boast of Christians.

You were enlightened by the blessing of the Holy Spirit, setting forth in prophecy the pure and immaculate condescension of Christ our God, O blessed Micah, and messenger of Christ. Therefore, pray for us who worthily honor your memory.

You are a successor to the fathers, O holy monk, and you followed them in your life and teachings, your character and temperance, prayer and intercession. Since you have found favor with God, obtain the remission of our sins and salvation for those who sing to you: Rejoice, O father Theodosius.

Brothers and sisters: As I see it, God has put us apostles at the end of the line, like men doomed to die in the arena. We have become a spectacle to the universe, to angels and men alike. We are fools on Christ’s account. Ah, but in Christ you are wise! We are the weak ones, you the strong! They honor you, while they sneer at us! Up to this very hour we go hungry and thirsty, poorly clad, roughly treated, wandering about homeless. We work hard at manual labor. When we are insulted we respond with a blessing. Persecution comes our way: we bear it patiently. We are slandered, and we try conciliation. We have become the world’s refuse, the scum of all; that is the present state of affairs.

I am writing you in this way not to shame you but to admonish you as my beloved children. Granted you have ten thousand guardians in Christ, you have only one father. It was I who begot you in Christ Jesus through my preaching of the gospel. I beg you, then, be imitators of me.

At that time a man came up to Jesus and knelt before him. “Lord,” he said, “take pity on my son, who is demented and in a serious condition. For example, he often falls into the fire and frequently into the water. I have brought him to your disciples but they could not cure him.” In reply Jesus said: “What an unbelieving and perverse lot you are! How long must I remain with you? How long can I endure you? Bring him here to me!” Then Jesus reprimanded the demon and it came out of the boy. That very moment the boy was cured.

The disciples approached Jesus at that point and asked him privately, “Why could we not expel it?” “Because you have so little trust,” he told them. “I assure you, if you had faith the size of a mustard seed, you would be able to say to this mountain, ‘Move from here to there,’ and it would move. Nothing would be impossible for you. This kind does not leave but by prayer and fasting.”

When they met again in Galilee, Jesus said to them, “The Son of Man is going to be delivered into the hands of men who will put him to death, and he will be raised up on the third day.”