Aug. 15 The Dormition of the Theotokos 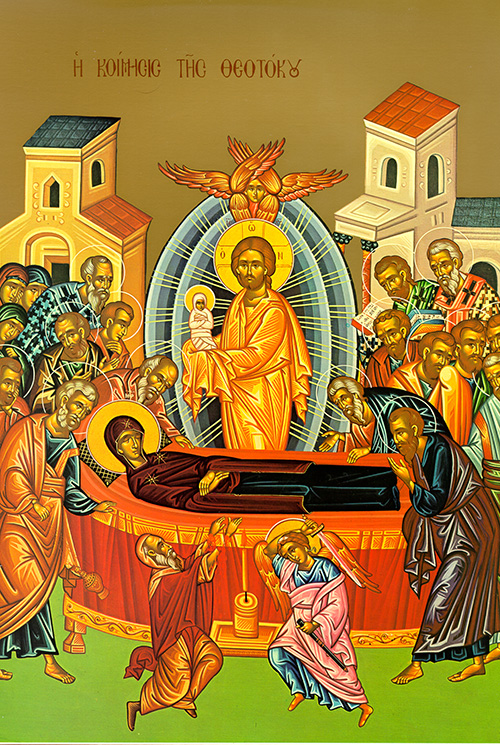 The Dormition of the Mother of God and Ever-Virgin Mary: Tradition relates that the Mother of God died in Jerusalem, after a visit with all of Christ’s apostles. They carried her coffin to the Garden of Gethsemane where it was placed into a tomb. The apostle Thomas came late and asked that the tomb be opened so that he could revere her body. When opened, the tomb was found empty except for the winding burial shroud.

O Theotokos, in giving birth you preserved virginity; and in your falling asleep you did not forsake the world. You are the Mother of Life and have been transferred to life, and through your prayers you deliver our souls from death.

The grave and death did not detain the Theotokos. She intercedes without rest and is our unfailing hope of protection; for he who dwelt in the womb of the Ever Virgin transferred to life the Mother of Life.

Brothers and sisters: Your attitude must be that of Christ: Though he was in the form of God, he did not deem equality with God something to be grasped at. Rather, he emptied himself and took the form of a slave, and it was thus that he humbles himself, obediently accepting even death, death on a cross! Because of this, God highly exalted him and bestowed on him the name about every other name, so that at Jesus’ name every knee must bend in the heavens, on the earth, and under the earth, and every tongue proclaim to the glory of God the Father: JESUS CHRIST IS LORD!

Brothers and sisters: My happiness is yours. That is why I wrote you in great sorrow and anguish, with copious tears – not to make you sad but to help you realize the great love I bear you.

If anyone has given offense he has hurt not only me, but in some measure, to say no more, everyone of you. The punishment already inflicted by the majority on such a one is enough; you should now relent and support him so that he may not be crushed by too great a weight of sorrow. I therefore beg you to reaffirm your love for him. The reason I wrote you was to test you and learn whether you are obedient in all matters. If you forgive a man anything, so do I. Any forgiving I have done has been for your sakes and, before Christ, to prevent Satan – whose guile we know too well – from outwitting us.

When I came to Troas to preach the gospel of Christ, the door of opportunity was opened wide for me by the Lord. Yet I was inwardly troubled because I did not find my brother Titus there. So I said goodbye to them and went off to Macedonia. Thanks be to God, who unfailingly leads us on in Christ’s triumphal train, and employs us to diffuse the fragrance of his knowledge everywhere! We are an aroma of Christ for God’s sake, both among those who are being saved and those on the way to destruction.