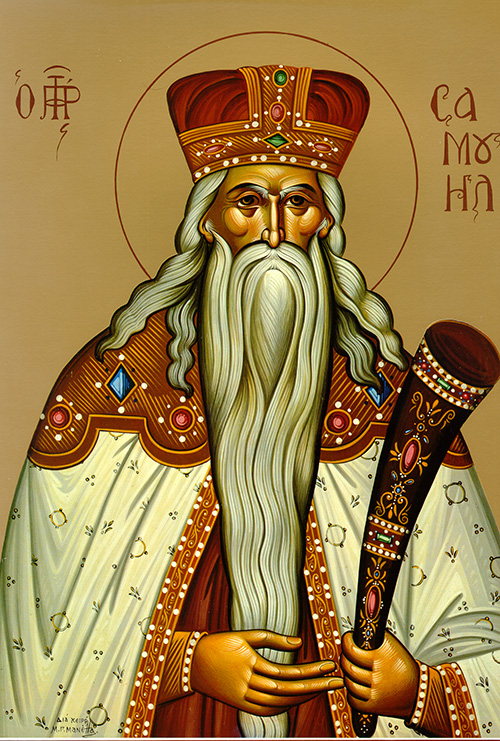 Fifteenth and last of the Judges of Israel, the prophet Samuel lived approximately eleven hundred years before Christ. Born in the tribe of Levi, son of Elkanah and Hannah, he was promised to the Lord by his till-then barren mother. At the age of twelve, Samuel had his first revelation from the Lord God. Samuel preached repentance to the children of Israel, and led the people to victory over the Philistines. Asked by the people to give them a king, he warned that God was the only true king of Israel, but they insisted. It was Samuel who anointed Saul son of Kish as the first king of Israel, and David son of Jesse as its second and greatest ruler. He died in Ramah and was buried there.

As we celebrate the memory of your prophet Samuel, O Lord, we implore You to save our souls through his prayers.

Like a precious gift you were given to God before your birth and you served Him like an angel from the time of your youth. You were made worthy to look into the future, O blessed one, and so we sing to you: O Samuel, prophet and servant of God.

Brothers and sisters: Grace and peace from God our Father and the Lord Jesus Christ. I continually thank my God for you because of the favor he has bestowed on you in Christ Jesus, in whom you have been richly endowed with every gift of speech and knowledge. Likewise, the witness I bore to Christ has been so confirmed among you that you lack no spiritual gift as you wait for the revelation of our Lord Jesus Christ. He will strengthen you to the end, so that you will be blameless on the day of our Lord Jesus Christ. God is faithful, and it was he who called you to fellowship with his Son, Jesus Christ our Lord.

At that time some Pharisees came up to Jesus and said, to test him, “May a man divorce his wife for any reason whatever?” Jesus replied, “Have you not read that at the beginning the Creator made them male and female and declared, ‘For this reason a man shall leave his father and mother and cling to his wife, and the two shall become as one’? Thus they are no longer two but one flesh. Therefore, let no man separate what God has joined.” They said to him, “Then why did Moses command divorce and the promulgation of a divorce decree?” Jesus replied, “Because of your stubbornness Moses let you divorce your wives, but at the beginning it was not that way. I now say to you, whoever divorces his wife (lewd conduct is a separate case) and marries another commits adultery, and the man who marries a divorced woman commits adultery.”

His disciples said to him, “If that is the case between man and wife, it is better not to marry.” Jesus said, “Not everyone can accept this teaching, only those to whom it is given to do so. Some men are incapable of sexual activity from birth; some have been deliberately made so; and some there are who have freely renounced sex for the sake of God’s reign. Let him accept this teaching who can.”