Aug. 19 The Holy Martyr Andrew the Centurion and his Companions 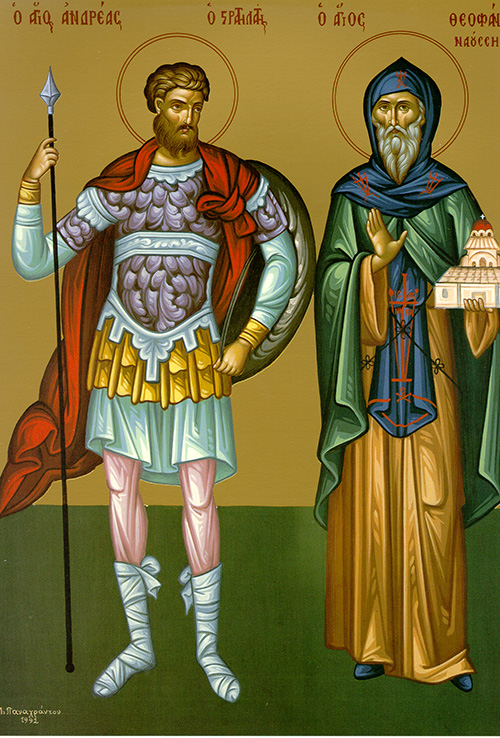 The martyr Andrew Stratelates was a military commander in the Roman army during the reign of the emperor Maximian (284-305). They loved him in the Roman army because of his bravery, invincibility, and sense of fairness. When a large Persian army invaded the Syrian territories, the governor entrusted St. Andrew with the command of the army, giving him the title of “Stratelates” (commander). His soldiers were pagans, and St. Andrew himself had still not accepted Baptism, but he believed in Jesus Christ. Before the conflict he persuaded the soldiers that the pagan gods were demons and could not help them in battle. He proclaimed to them Jesus Christ, omnipotent God of Heaven and earth, giving help to all who believe in Him. The soldiers went into battle, calling on the help of the Savior. The small detachment routed numerous hosts of Persians. St. Andrew returned from the campaign in glory, having gained a total victory. But jealous men denounced him to the governor, saying he was a Christian who had converted the soldiers under his command to his faith. Later they were slaughtered under Maximian in the narrows of the Taurus Mountains by the army of the governor Seleucus.

You forsook the glory of earthly prestige and inherited the kingdom of heaven. Drops of your blood gleam like rubies in the everlasting crowns which Christ gave you. You led a whole company of martyrs to Christ and found Him in the company of angelic hosts. There you join Him in the never-fading light, O Andrew, true leader and soldier. Along with all of your men, pray unceasingly for all of us.

Standing at prayer before the Lord like a star which heralds the sun, you see the treasure of the kingdom of heaven before you. Filled with joy which no one can describe, with the chorus of chanting angels, O Andrew, you sing a never-ending hymn to the Immortal King. Therefore, beg Christ to save our souls.

Brothers and sisters: We have that spirit of faith of which the Scripture says, “Because I believed, I spoke out.” We believe and so we speak, knowing that he who raised up the Lord Jesus will raise us up along with Jesus and place both us and you in his presence. Indeed, everything is ordered for your benefit, so that the grace bestowed in abundance may bring greater glory to God because they who give thanks are many.

We do not lose heart, because our inner being is renewed each day even though our body is being destroyed at the same time. The present burden of our trial is light enough, and earns for us an eternal weight of glory beyond all comparison. We do not fix our gaze on what is seen but on what is unseen. What is seen is transitory; what is unseen lasts forever.

The Lord said: “As lightning from the east flashes to the west, so will the coming of the Son of Man be. Where the carcass lies, there the vultures gather. Immediately after the stress of that period, ‘the sun will be darkened, the moon will not shed her light, the stars will fall from the sky, and the hosts of heaven will be shaken loose.’ Then the sign of the Son of Man will appear in the sky, and ‘all the clans of the earth will strike their breasts’ as they see ‘the Son of Man coming on the clouds of heaven’ with power and great glory. He will dispatch his angels ‘with a mighty trumpet blast, and they will assemble his chosen from the four winds, from one end of heaven to the other.’ From the fig tree learn a lesson. When its branch grows tender and sprouts leaves, you realize summer is near. Likewise, when you see all these things happening, you will know that he is near, standing at your door.

“Stay awake, therefore! You cannot know the day your Lord is coming. Be sure of this: if the owner of the house knew when the thief was coming he would keep a watchful eye and not allow his house to be broken into. You must be prepared in the same way. The Son of Man is coming at the time you least expect. Who is the faithful, farsighted servant whom the master has put in charge of his household to dispense food at need? Happy the servant whom his master discovers at work on his return! I assure you, he will put him in charge of his property. But if the servant is worthless and tells himself, ‘My master is a long time in coming,’ and begins to beat his fellow servants, to eat and drink with drunkards, that man’s master will return when he is not ready and least expects him. He will punish him severely and settle with him as is done with hypocrites. There will be wailing then and grinding of teeth.”