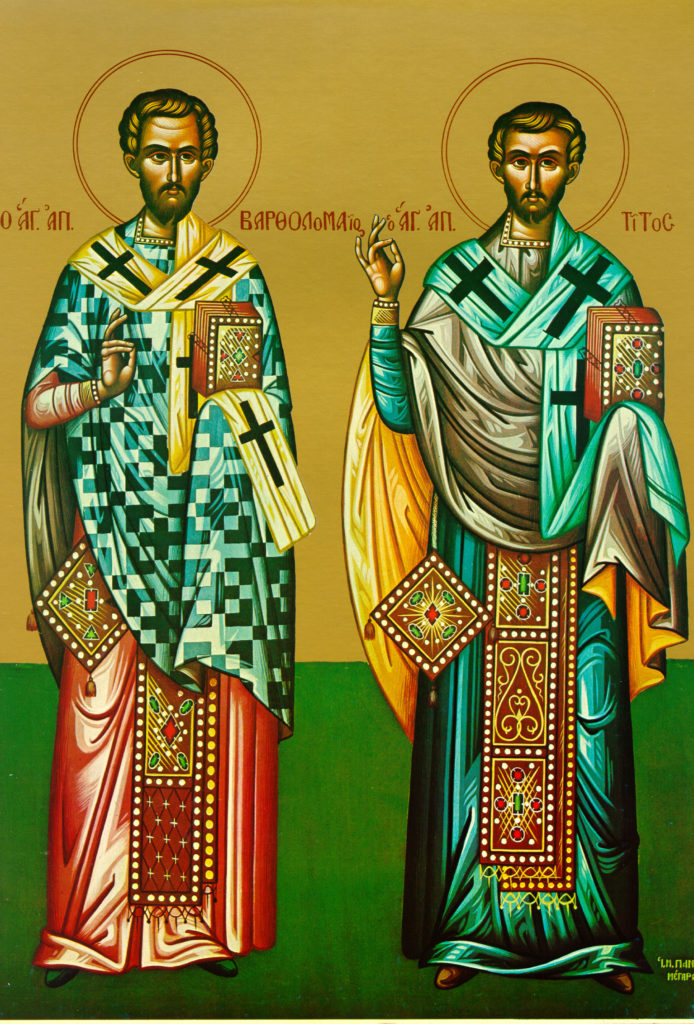 The relics of the holy apostle Bartholomew were stolen by the Armenians, and then taken to the town of Alipay’s. At the time of Theophilus the Iconoclast, they were translated again, this time to the town of Benevento. From there they were taken to Rome.

The holy apostle Titus is counted as one of the 70 Apostles. Born in Crete, he was baptized by the Apostle Paul. He served Paul in such sincerity of the heart that Paul called him his son (Titus 1:4) as well as his brother (2 Cor. 12:18). He was made the first bishop of Crete, where he widely governed the Church to great old age. He died at the age of ninety-four.

You appeared to the Church as a brilliant star, O Bartholomew, apostle of the Lord, illuminating those who honor you with the radiance of doctrine and awesome wonders.

As a companion of Paul, you declared the word of divine grace to us. Ever-memorable and truly great Titus, we tender a song of honor to you. Now pray unceasingly for all of us.

Brothers and sisters: since we have these promises, beloved, let us purify ourselves from every defilement of flesh and spirit, and in the fear of God strive to fulfill our consecration perfectly.

Make room for us in your hearts! We have injured no one, we have corrupted no one, we have cheated no one. I do not condemn you. I have already said that you are in our hearts, even to the sharing of death and life together. I speak to you with utter frankness and boast much about you. I am filled with consolation, and despite my many afflictions my joy knows no bounds.

When I arrived in Macedonia I was restless and exhausted. I was under all kinds of stress — quarrels with others and fears writhing myself. But God, who gives hearts to those who are low in spirit, gave me strength with the arrival of Titus. This he did, not only by his arrival but by the reinforcement Titus had already received from you; for he reported your longing, your grief and your ardent concern for me, so that my joy is greater still. If I saddened you by my letter I have no regrets. Or if I did feel some regret (because I understand that the letter caused you grief for a time), I am happy once again; not because you were saddened, but because your sadness led to repentance. You were filled with sorrow that came from God; thus you did not suffer any loss from us. Indeed, sorrow for God’s sake produces a repentance without regrets, leading to salvation, whereas worldly sorrow brings death.

At that time immediately upon leaving the synagogue, Jesus entered the house of Simon and Andrew with James and John. Simon’s mother-in-law lay I’ll with a fever, and the first thing they did was to tell Jesus about her. Jesus went over to her and grasped her hand and helped her up, and the fever left her. She immediately began to wait on them.

After sunset, as evening drew on, they brought to Jesus all who were ill, and those possessed by demons. Before long the whole town was gathered outside the door. Those whom he cured, who were variously afflicted, were many, and so were the demons he expelled. But he would not permit the demons to speak, because they knew him. Rising early the next morning, he went off to a lonely place in the desert; there he was absorbed in prayer.