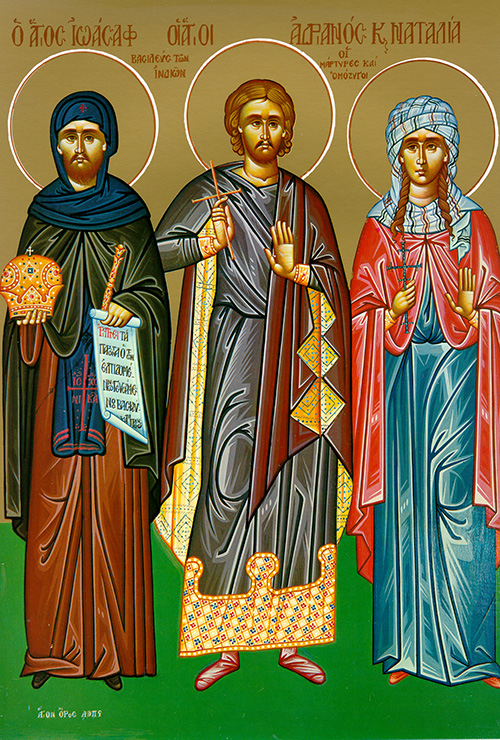 The martyrs Adrian and Natalie were married in their youth for one year prior to their martyrdom. They lived in Nicomedia during the time of  the emperor Maximian (305-311). The emperor promised a reward to anyone who would inform on Christians to bring them to trial. Then the denunciations began, and 23 Christians were captured in a cave near Nicomedia. They were tortured, urged to worship idols, and then brought before the Praetor, in order to record their names and responses. Adrian, the head of the praetorium, watched as these people suffered with such courage for their faith. Seeing how firmly and fearlessly they confessed Christ, he asked: “What rewards do you expect from your God for your suffering?” The martyrs replied: “Such rewards as we are not able to describe, nor can your mind comprehend.” St. Adrian told the scribes, “Write my name down also, for I am a Christian and I die gladly for Christ God.”

You saved a treasure of great wealth, the divine and true faith. Turning away from the foolish actions of your ancestors, you followed in the steps of the Master. You were enriched with the divine gifts, O glorious Adrian, and now we seek you to be generous to us.

O Adrian, martyr of Christ, you preserved in your heart the exhortations of your pious and devoted wife. Together with her, you accepted every kind of suffering and obtained the crown of victory.

Brothers and sisters: Indeed, sorrow for God’s sake produces a repentance without regrets, leading to salvation, whereas worldly sorrow brings death. Just look at the fruit of this sorrow which stems from God. What a measure of holy zeal it has brought you, not to speak of readiness to defend yourselves! What indignation, fear, and longing! What ardent desire to restore the balance of justice! In every way you have displayed your innocence in this matter. Therefore, my writing to you was not intended for the man who had given the offense or for the one offended, but to make plain in the sight of God the devotion you have for us. This done, we are comforted.

Beyond this consolation, we have rejoiced even more at the joy of Titus because his mind has been set at rest by all of you. For though I had boasted to him about you, I was not put to shame. Rather, just as everything I ever said to you was true, so my boasting to Titus has been proved equally true. His heart embraces you with an expanding love as he recalls the obedience you showed to God when you received him in fear and trembling. I rejoice because I trust you utterly.

At that time John’s disciples and the Pharisees were accustomed to fast. People came to Jesus with the objection, “Why do John’s disciples and those of the Pharisees fast while yours do not?” Jesus replied: “How can the guests at a wedding fast as long as the groom is still among them? So long as the groom stays with them, they cannot fast. The day will come, however, when the groom will be taken away from them; on that day they will fast. No one sews a patch of shrunken cloth on an old cloak. If he should do so, the very thing he has used to cover the hole would pull away – the new from the old – and the tear would get worse. Similarly, no man pours new wine into old wineskins. If he does so, the wine will burst the skins, and both wine and skins will be lost. No, new wine is poured into new skins.”