Dec. 18  The Holy Martyr Sebastian and his Companions 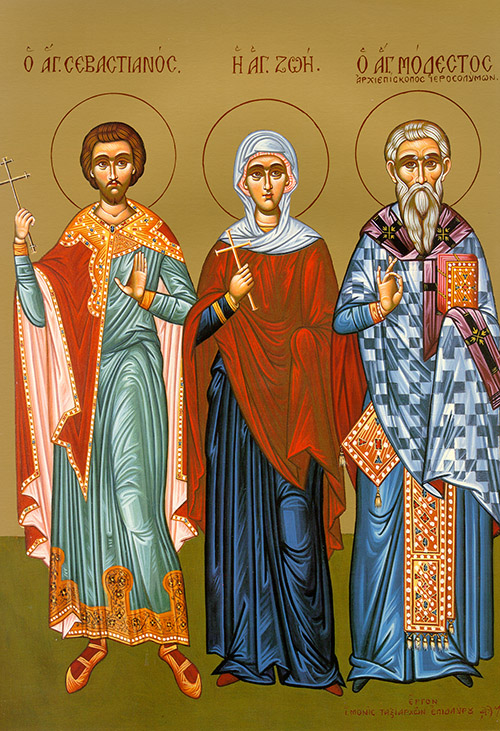 The holy martyr Sebastian was born in Italy and brought up in the city of Milan where he intended to be a soldier. The emperor Diocletian made him captain of the imperial guard. During this time, Sebastian professed the Faith and was greatly persecuted for it. After many of his converts were martyred, the emperor called Sebastian and rebuked him for his betrayal. Sebastian replied, “I always pray to my Christ for your health and for the peace of the Roman Empire.” The emperor ordered him stripped and shot with arrows. Since this did not kill him, he was beaten to death with staves in the year 287.

O Sebastian, by the shedding of your blood you were clothed in martyrdom, being arrayed in a robe of precious purple. Therefore, you took up your abode with Christ in the kingdom without end on high, and with those who suffered with you, you received the crown of glory. O wise Sebastian, as you sing with them, always remember us.

Brothers and sisters: By faith Abraham sojourned in the promised land as in a foreign country, dwelling in tents with Isaac and Jacob, heroes of the same promise; for he was looking forward to the city with foundations, whose designer and maker is God.

By faith Abraham, when put to the test, offered up Isaac; he who had received the promises was ready to sacrifice his only son, of whom it was said, “Through Isaac shall your descendants be called.” He reasoned that God was able to raise from the dead, and so he received Isaac back as a symbol. By faith Isaac invoked Jacob and Esau blessings that were still to be.

By faith Jacob, when dying, blessed each of the sons of Joseph, and worshiped God, leaning on the head of his staff. By faith, Joseph, near the end of his life, spoke of the Exodus of the Israelites, and gave instructions about his burial. By faith Moses’ parents hid him for three months after his birth, thereby disregarding the king’s edict, because they saw that he was a beautiful child.

What more shall I recount? I have no time to tell of Gideon, Barak, Samson, Jephthah, of David and Samuel and the prophets, who by faith conquered kingdoms, did what was just, obtained the promises; they broke the jaws of lions, put out raging fires, escaped the devouring sword; though weak they were made powerful, became strong in battle, and turned back foreign invaders. Women received back their dead through resurrection. Others were tortured and would not receive deliverance, in order to obtain a better resurrection. Still others endured mockery, scourging, even in chains and imprisonment. They were stoned, sawed in two, put to death at sword’s point; they went about garbed in the skins of sheep or goats, needy, afflicted, tormented. The world was not worthy of them. They wandered about in deserts and on mountains, they dwelt in caves and in holes of the earth. Yet despite the fact that all of these were approved because of their faith, they did not obtain what had been promised. God had made a better plan, a plan which included us. Without us, they were not to be made perfect.

Now this is how the birth of Jesus Christ came about. When his mother Mary was engaged to Joseph, but before they lived together, she was found with child through the power of the Holy Spirit. Joseph her husband, an upright man unwilling to expose her to the law, decided to divorce her quietly. Such was his intention when suddenly the angel of the Lord appeared in a dream and said to him: “Joseph, son of David, have no fear about taking Mary as your wife. It is by the Holy Spirit that she has conceived this child. She is to have a son and you are to name him Jesus because he will save his people from their sins.” All this happened to fulfill what the Lord had said through the prophet: “The virgin shall be with child and give birth to a son, and they shall call him Emmanuel,” a name which means, “God is with us.” When Joseph awoke and received Mary into his home as his wife. He had no relations with her at any time before she bore a son, whom he named Jesus.