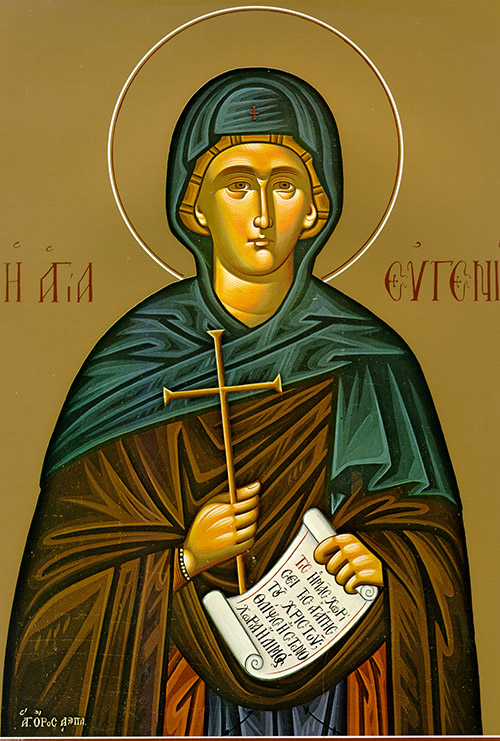 The holy great martyr Eugenia’s father was Eparch of All Egypt. Eugenia ministered to the Christians who had been forced to flee the city of Alexandria due to persecution, and was then baptized. She assumed men’s clothing and lived in a monastery. She was betrayed to the Eparch, who then found his daughter (who he thought was dead). He was converted to the Faith. They moved back to Rome, where she was beheaded on December 25, 262.

In you, O mother, the divine image was strictly preserved; taking up your cross, you followed Christ. You taught us by example how to spurn the flesh, for it passes away, and how to care for the soul, which is immortal. Therefore, O venerable Eugenia, your soul rejoices with the angels.

Today the Virgin is coming to the cave to give birth to the eternal Word in a manner beyond expression. Let the world dance when it hears the news; with the angels and shepherds glorify the eternal God who chose to appear as a newborn child.

You left the passing glory of the world to follow Christ, and you kept immaculate the brilliance of your soul, O God-wise martyr, all-praised Eugenia.

Brothers and sisters: Because Scripture saw in advance that God’s way of justifying the Gentiles would be through faith, it foretold this good news ro Abraham: “All nations shall be blessed in you.” Thus it is that all who believe are blessed along with Abraham, the man of faith.

All  who depend on observance of the law, on the other hand, are under a curse. It is written, “Cursed is he who does not abide by everything written in the book of the law and carry it out.” It should be obvious that no one is justified in God’s sight by the law, for “the just man shall live by faith.” But the law does not depend on faith. Its terms are: “Whoever does these things shall live by them.”

The Lord told this parable: “The reign of God is like a mustard seed which a man took and planted in his garden. It grew and became a large shrub and the birds of the sir nested in its branches.”

Jesus went on: “To what shall I compare the reign of God? It is like yeast which a woman took to knead into three measures of flour until the whole mass of dough began to rise.”

He went through cities and towns teaching– all the while making his way toward Jerusalem. Someone asked him, “Lord, are they few in number who are to be saved?” Jesus replied: “Try to come in through the narrow door. Many, I tell you, will try to enter and be unable. When once the master of the house has risen to lock the door and you stand outside knocking and saying, ‘Sir, open for us,’ he will say in reply, ‘I do not know where you come from.’ Then you will begin to say, ‘We ate and drank in your company. You taught in our streets.’ But he will answer, ‘I tell you, I do not know where you come from. Away from me, you evil-doers!’

“There will be wailing and grinding of teeth when you see Abraham, Isaac, Jacob, and all the prophets safe in the kingdom of God, and you yourselves rejected. People will come from the east and the west, from the north and the south, and will take their place at the feast in the kingdom of God.”

Readings for the Vigil of Christmas

In times past, God spoke in fragmentary and varied ways to our fathers through the prophets; in this, the final age, he has spoken to us through his Son, whom he has made heir to all things and through whom he first created the universe. This Son is the reflection of the Father’s glory, the exact representation of the Father’s being, and he sustains all things by his powerful word. When he had cleansed us from our sins, he took his seat at the right hand of the Majesty in heaven, as far superior to the angels as the name he has inherited is superior to theirs.

To which of the angels did God ever say, “You are my son; today I have begotten you”? Or again, “I will be his father, and he shall be my son”? And again, when he leads his first-born into the world, he says, “Let all the angels of God worship him.” Of the angels he says, “He makes his angels winds, and his ministers flaming fire”; but of the Son, “You throne, O God, stands forever and ever; a righteous scepter is the scepter of your kingdom. You have loved justice and hated wickedness, therefore God, your God, has anointed you with the oil of gladness above your fellow kings.” And, “Lord, of old you established the earth, and the heavens are the work of your hands. They will perish, but you remain; all of them will grow old like a garment. You will roll them us like a cloak, like a garment they will be changed; but you are the same, and your years will have no end.”

In those days Caesar Augustus published a decree ordering a census of the whole world. This first census took place while Quirinius was governor of Syria. Everyone went to register, each to his own town. And so Joseph went from the town of Nazareth in Galilee to Judea, to David’s town of Bethlehem–because he was of the house and lineage of David–to register with Mary, his espoused wife, who was with child.

While they were there the days of her confinement were completed. She gave birth to her firstborn son and wrapped him in swaddling clothes and laid him in a manger, because there  was no room for them in the place where travelers lodged.

There were shepherds in that locality, living in the fields and keeping night watch by turns over their flocks. The angel of the Lord appeared to them as the glory of the Lord shone around them, and they were very much afraid. The angel said to them: “You have nothing to fear! I come to proclaim good news to you– tidings of great joy to be shared by the whole people. This day in David’s city a savior has been born to you: in a manger you will find an infant wrapped in swaddling clothes.” Suddenly, there was with the angel a multitude of the heavenly hosts, praising God and saying, “Glory to God in high heavens, peace on earth to those on whom his favor rests.”

When the angels had returned to heaven, the shepherds said to one another: “Let us go over to Bethlehem and see this event which the Lord has made known to us.” They went in haste and found Mary and Joseph, and the baby lying in the manger; once they saw, they understood. All who heard of it were astonished at the report given them by the shepherds.

Mary treasured all these things and reflected on them in her heart. The shepherds returned, glorifying and praising God for all they had heard and seen, in accord with what had been told them.