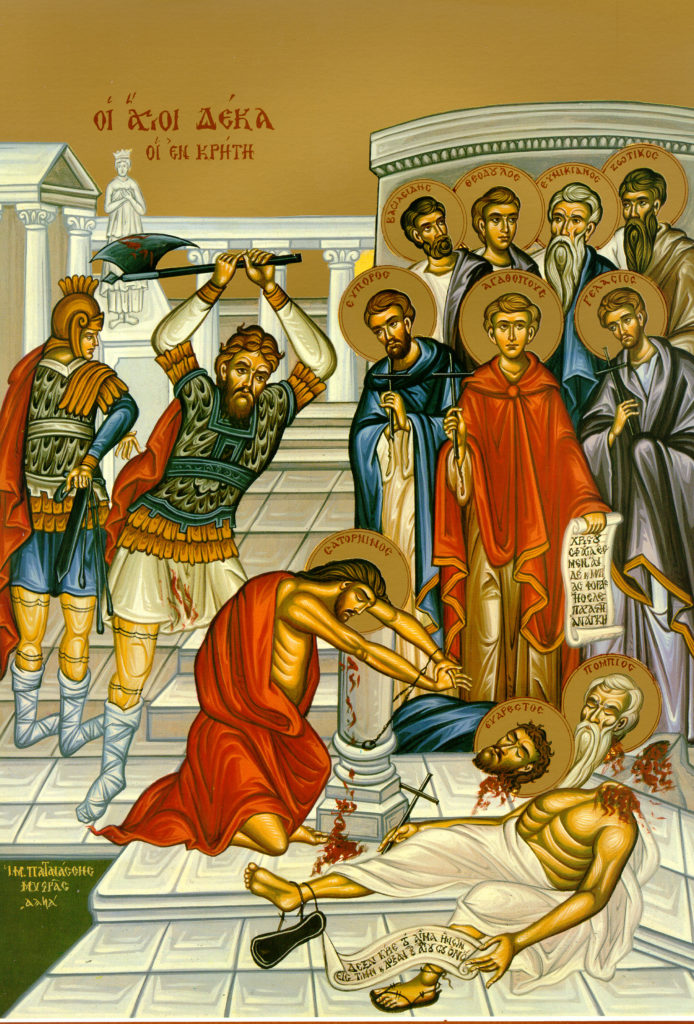 The Ten Holy Martyrs of Crete: Theodulus, Saturninus, Euporus, Gelasius, Eunician, Zoticus, Pompous, Agathopus, Basilides, and Evaristus suffered for Christ during the 3rd century under the emperor Decius (249-251). The governor of Crete fiercely persecuted the Church, and arrested anyone who believed in Christ. Once, ten Christians were brought before him from various cities of Crete, who at their trial steadfastly confessed their faith in Christ and refused to worship idols. For 30 days they were subjected to cruel tortures, and with the help of God they all persevered, glorying God. Before their death they prayed that the Lord would enlighten their torturers with the light of the true Faith. Since pain did not influence the saints, they were beheaded.

We honor Crete of many wonders from which these precious flowers have shone forth, pearls of Christ and offspring of martyrs. Although these blessed only numbered ten, they overcame the idolatrous nation. Therefore, these brave souls were given crowns.

The noble struggle of the martyrs shines forth like the morning star and sheds brilliant light for us on the One who was born in a cave, to whom the Virgin has given birth without human seed.

Brothers and sisters: The former commandment [concerning the levitical priesthood and the law it serves] has been annulled because of its weakness and uselessness, for the law brought nothing to perfection. But a better hope has supervened, and through it we draw near to God. This has been confirmed by an oath. The priests of the old covenant became priests without an oath, unlike Jesus to whom God said: “The Lord has sworn, and he will not repent: ‘You are a priest forever, according to the order of Melchizedek.’” Thus has Jesus become the guarantee of a better covenant. Under the old covenant there were many priests because they were prevented by death from remaining in office; but Jesus, because he remains forever, has a priesthood which does not pass away. Therefore he is always able to save these who approach God through him, since he forever lives to make intercession for them.