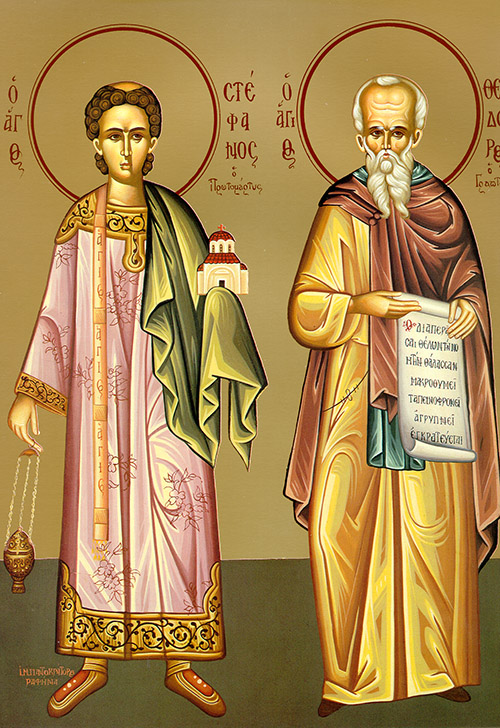 The holy apostle, proto-martyr, and archdeacon Stephen was a man full of faith and the Holy Spirit. First of the seven deacons whom the Apostles chose to be fellow-laborers in the ministry, he was also the first of the disciples of the Lord to pour out his own blood at Jerusalem. He provided testimony for Christ Jesus, who he saw standing in glory at the right hand of the Father. He was covered over by stones while praying for his persecutors.

Our venerable father and confessor Theodore of Apamea in Bithynia was a monk of the laura of St. Sabbas in Palestine, a priest, and a martyr. In Constantinople with his brother St. Theophane the Hymnographer, he endured much in the defense of the Holy Images. He endured scourging, prisons, exile, and even brands on his forehead, for which he was called Graptus. He expired in prison in 845.

First martyr and apostle of Christ, you fought the good fight. You convicted the tyrants of their wickedness. When you were killed by stoning at the hands of sinners, you received a crown from God’s right hand while you cried out: Lord, do not hold this sin against them.

Guide to Orthodoxy, teacher of piety and holiness, luminary for the world, inspired adornment of monks, O wise Theodore, harp of the Spirit, you enlightened all by your teachings; intercede with Christ our God to save our souls.

Yesterday, in human flesh the Master came to us; today, from the flesh, His servant departs. Yesterday, the King was born in flesh; today, His servant is killed by stoning. Thus, holy Stephen, the first martyr, is brought to perfection.

Your  mouth spoke bravely, and you shamed the haughty torturer by your great wisdom through suffering tortures: you were grievously wounded on your face for the sake of the all-honorable icon of Christ which you taught us always to honor and glorify. O Theodore, obtain great mercy for us.

Stephen was a man filled with grace and power, who worked great wonders and signs among the people. Certain members of the so-called “Synagogues of Roman Freedom” (that is, the Jews from Cyrene, Alexandria, Cilicia, and Asia) would undertake to engage Stephen in debate, but they proved no match for the wisdom and spirit with which he spoke. They persuaded some men to make the charge that they had heard him speaking blasphemies against Moses and God, and in this way they incited the people, the elders, and the scribes. All together they confronted him, seized him, and led him off to the Sanhedrin. There they brought in false witnesses, who said: “This man never stops making statements against the holy place and the law. We have heard him claim that Jesus the Nazorean will destroy this place and change the customs which Moses handed down to us.” The members of the Sanhedrin who sat there stared at him intently. Throughout, Stephen’s face seemed like that of an angel.

The high priest asked whether the charges were true. To this Stephen replied: “My brothers! Fathers! Listen to me. The God of glory appeared to our father Abraham when he was still in Mesopotamia and before he settled in Haran. God said to him, Leave your country and your kinsfolk, and go to the land I will show you. So he left the land of the Chaldeans and settled in Haran. After Abraham’s father died, God made him move from there to this land where you now dwell. God did not give him any of it as his heritage, not even a foot of land.

“You stiff-necked people, uncircumcised in heart and ears, you are always opposing the Holy Spirit just as your fathers did before you. Was there ever any prophet whom your fathers did not persecute? In their day, they put to death those who foretold the coming of the Just One; now you in your turn have become his betrayers and murderers. You who received the law through the ministry of angels have not obeyed it.”

Those who listened to his words were stung to the heart; they ground their teeth in anger at him. Stephen meanwhile, filled with the Holy Spirit, looked to the sky above and saw the glory of God, and Jesus standing at God’s right hand. “Look!” he exclaimed, “I see an opening in the sky, and the Son of Man standing at God’s right hand.” The onlookers were shouting aloud, holding their hands over their ears as they did so. Then they rushed at him as one man, dragged him out of the city, and began to stone him. The witnesses meanwhile were oiling their cloaks at the feet of a young man named Saul. As Stephen was being stoned he could be heard praying, “Lord Jesus, receive my spirit.” He fell to his knees and cried out in a loud voice, “Lord, do not hold this sin against them.” And with that he died.

The Lord said to the chief priests and the elders of the people, “Listen to another parable. There was a property owner who planted a vineyard, put a hedge around it, dug out a vat, and erected a tower. Then he leased it out to tenant farmers and went on a journey. When vintage time arrived he dispatched his slaves to the tenants to obtain his share of the grapes. The tenants responded by seizing the slaves. They beat one, killed another, and stoned a third. A second time he dispatched even more slaves than before, but they treated them the same way. Finally he sent his son to them, thinking, ‘They will respect my son.’ When they saw the son, the tenants said to one another, ‘Here is the one who will inherit everything. Let us kill him and then we shall have his inheritance!’ With that they seized him, dragged him outside the vineyard, and killed him. What do you suppose the owner of the vineyard will do to those tenants when he comes?”