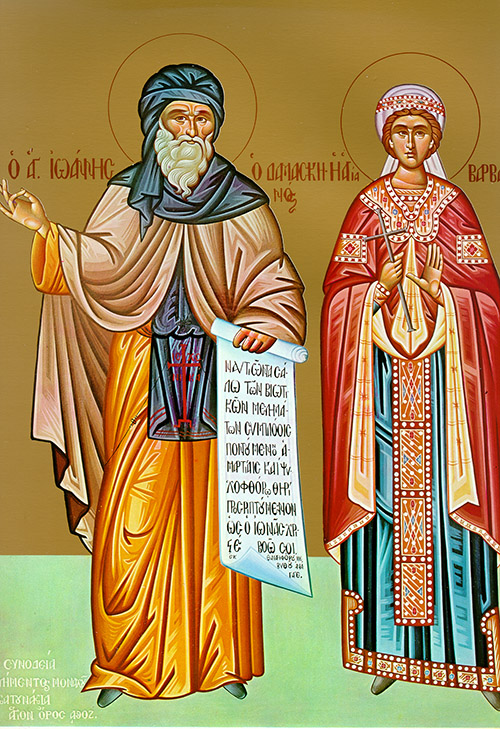 The holy great martyr Barbara was raised by her pagan father who shut her away from the world because of her great beauty. Barbara came to realize that the soulless idols her father worshiped could not be responsible for the inexpressible beauty of the world outside her window. She decided to live her life as a virgin, dedicated to the Lord whom she learned about from other Christian maidens when her father at last gave her some freedom. When Barbara confessed herself a Christian, her father beat her and turned her over to the prefect of the city. Barbara was tortures mercilessly, and in the end, earned her crown of martyrdom after she was beheaded by her own father in the year 306.

Our venerable father John of Damascus was a priest celebrated for his holiness and learning. He strove diligently by his word and writings in favor of the veneration of Holy Images against the Emperor Leo III, the Isaurian. Having been made a monk in the monastery of St. Sabbas near Jerusalem, he composed sacred hymns and there reposed in the Lord. His body was buried on this day in 749.

Let us praise the honorable Barbara. She thwarted the power of the enemy and through the might and the strength of the cross, she was made free in her flight to God.

Guide to Orthodoxy, teacher of piety and holiness, luminary for the world, inspired adornment of bishops, O wise John, Harp of the Spirit, you enlightened all by your teachings; intercede with Christ our God to save our souls.

O honorable and triumphant Barbara, you believed in the Holy Trinity and renounced the multiplicity of pagan deities. You fought for your faith with great courage and were not frightened by the threats of your persecutors, but instead declared in a clear voice: I adore one God in three Divine Persons.

Let us praise John the hymnographer with song. He is an effective preacher and a teacher for the Church. Behind the armor of the cross he exposed the lies of heresy, and standing before God he obtains remission of sins for us.

Brothers and sisters: Live as children of light. Light produces every kind of goodness and justice and truth. Be correct in your judgment of what pleases the Lord. Take no part in vain deeds done in darkness; rather, condemn them. It is shameful even to mention the things these people do in secret; but when such deeds are condemned they are seen in the light of day, and all that then appears is light. That is why we read: “Awake, O sleeper, arise from the dead, and Christ will give you light.”

Keep careful watch over your conduct. Do not act like fools, but like thoughtful men. Make the most of the present opportunity, for these are evil days. Do not continue in ignorance, but try to discern the will of the Lord. Avoid getting drunk on wine; that leads to debauchery. Be filled with the Spirit, addressing one another in psalms and hymns and inspired songs. Sing praise to the Lord with all your hearts.

At that time as Jesus was entering a village, ten lepers met him. Keeping their distance, they raised their voices and said, “Jesus, Master, have pity on us!” When he sae them, he responded, “Go and show yourselves to the priests.” On their way there they were cured. One of them, realizing that he had been cured, came back praising God in a loud voice. He threw himself on his face at the feet of Jesus and spoke his praises. This man was a Samaritan. Jesus took the occasion to say, “Were not all ten made whole? Where are the other nine? Was there no one to return and give thanks to God except this foreigner?” He said to the man, “Stand up and go your way; your faith has been your salvation.”