Dec. 5 Our Venerable and God-bearing Father Sabbas the Sanctified 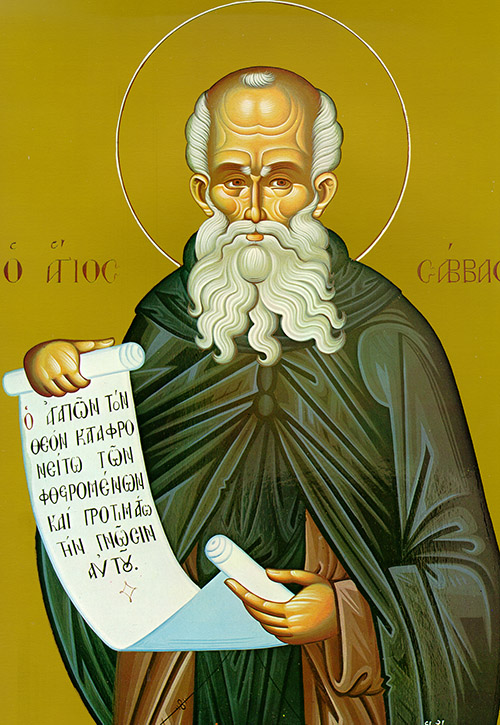 Our venerable father Sabbas the Consecrated was born in Cappadocia. He arrived at the desert of Judea and instituted a new sort of eremetical life in seven monasteries, which were called “laurae.” He gathered solitaries under one overseer (hegumen). In the great laura, which afterward was adorned with his name, he dwelt for many years, a shining example of sanctity. He strove assiduously for the faith taught at the Council of Chalcedon. (532)

Your abundant tears made the wilderness bloom, and your suffering made your labors freuitful a hundred-fold; you became a shining torch over the world. O venerable father Sabbas, pray to Christ our God that He may save our souls.

You were offered up by your virtues, becoming a Gardener of Piety, being a chaste offering to God from your youth, O Blessed Sabbas. Therefore, you were the enrichment of monastics, and a praiseworthy citizen of the desert. Therefore, we cry out to you: Rejoice, truly wealthy Sabbas.

Timothy, my son: Never censure an older man, but appeal to him as to a father. You should treat younger men as brothers, older women as mothers, and younger women as sisters, with absolute purity.

Honor the claims of widows who are real widows – that is, who are alone and bereft. If a widow has any children or grandchildren, let these learn that piety begins at home and that they should fittingly support their parents and grandparents; this is the way God wants it to be. The real widow, left destitute, is one who has set her hope on God and continues night and day in supplications and prayers. A widow who givers herself up to selfish indulgence, however, leads a life of living death.

Make the following rules about widows, so that no one may incur blame. If anyone does not provide for his own relatives and especially for members of his immediate family, he has denied the faith; he is worse than an unbeliever. To be on the church’s roll of widows, a widow should be not less than sixty years of age. She must have been married only once. Her good character will be attested to by her good deeds. Has she brought up children? Has she been hospitable to strangers? Has she washed the feet of Christian visitors? Has she given help to those in distress? In a word, has she been eager to do every possible good work?

At that time some Sadducees came forward (the ones who claim there is no resurrection) to pose this problem to Jesus: “Master, Moses prescribed that if a man’s brother dies leaving a wife with no child, the brother should marry the widow and raise posterity to his brother. Now there were seven brothers. The first one married and died childless. Next, the second brother married the widow, then the third, and so on. All seven died without leaving her any children. Finally the widow herself died. At the resurrection, whose wife will she be? Remember, seven married her.”

Jesus said to them: “The children of this age marry and are given in marriage, but those judged worthy of a place in the age to come and of resurrection from the dead do not. They become like angels and are no longer liable to death. Sons of the resurrection, they are sons of God. Moses in the passage about the bush showed that the dead rise again when he called the Lord the God of Abraham, and the God of Isaac, and the God of Jacob. God is not the God of the dead but of the living. All are alive for him.”

Some of the scribes responded, “Well said Teacher.” They did not dare ask him anything else. Jesus said to them: “How can they say that the Messiah is the son of David? Does not David himself say in the psalms, ‘The Lord said to my lord: Sit at my right hand while I make your enemies your footstool’? Now if David accords him the title ‘lord,’ how can he be his son?”