Feb. 03 Synaxis of the Holy and Just Simeon, Who received God, and the Prophetess Anna 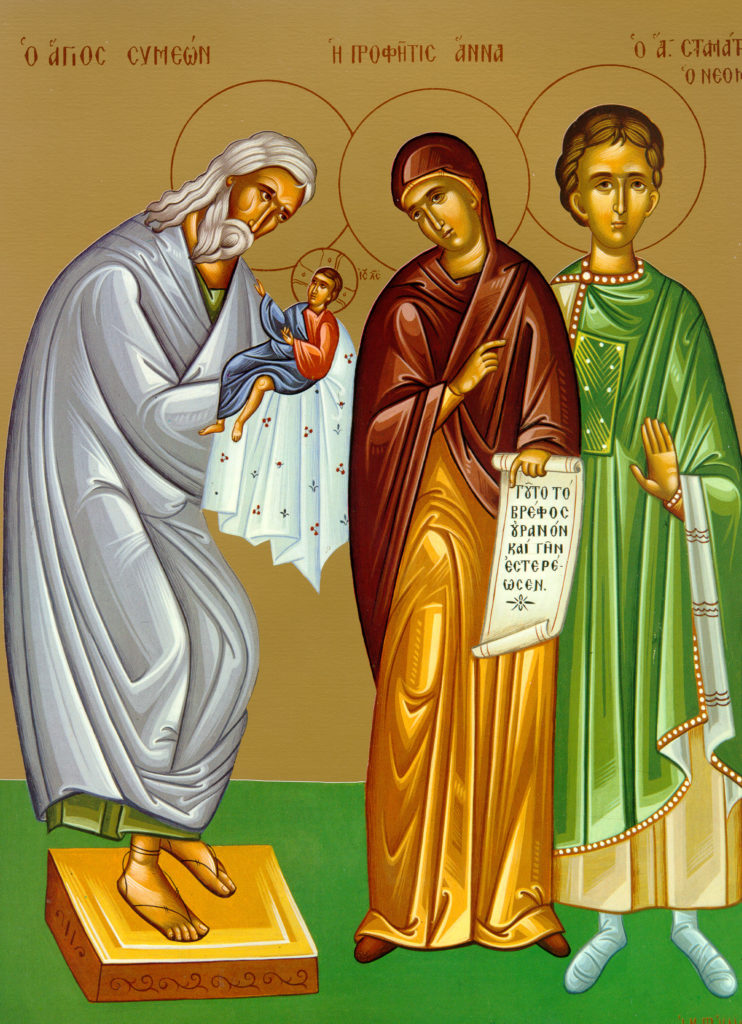 The synaxis of the holy prophet Simeon and the prophetess Anna, who, the one a righteous and devout old man, and the other a widow and prophetess, were worthy to hail the infant Jesus as the Messiah and Savior, the blessed hope and redemption of Israel, when he had been brought to the temple to be circumcised according to the custom of the law. All we know of them is given in the second chapter of the Gospel according to St. Luke.

The elderly Simeon is filled with happiness today, receiving the eternal God as an infant into his arms. He begs to be released from the bonds of the flesh, for he cries: I have seen Your salvation for the world.

The Elder departed from the bonds of the flesh of this passing life today. He received Christ the Creator and Lord into his arms.

Brothers and sisters: When Christ came as high priest of the good things which have come to be, he entered once for all into the sanctuary, passing through the greater and more perfect tabernacle not made by hands, that is, not belonging to this creation. He entered, not with the blood of goats and calves, but with his own blood, and achieved eternal redemption. For if the blood of goats and bulls and the sprinkling of a heifer’s ashes can sanctify those who are defiled so that their flesh is cleansed, how much more will the blood of Christ, who through the eternal spirit offered himself up unblemished to God, cleanse our consciences from dead works to worship the living the God!

At that time there lived in Jerusalem at the time a certain man named Simeon. He was just and pious, and awaited the consolation of Israel, and the Holy Spirit was upon him. It was revealed to him by the Holy Spirit that he would not experience death until he had seen the anointed of the Lord. He came to the temple now, inspired by the Spirit; and when the parents brought in the child’s Jesus to perform for him the customary ritual of the law, Simeon took the child in his arms and blessed God in these words: “Now, Master, you can dismiss your servant in peace; you have fulfilled your word. For my eyes have witnessed your saving deed displayed for all the peoples to see: A revealing light to the Gentiles, the glory of your people Israel.”

The child’s father and mother were marveling at what was being said about him. Simeon blessed him and said to Mary his mother: “This child is destined to be the downfall on the rise of many in Israel, a sign that will be opposed — and you yourself shall be pierced with a sword — so that the thoughts of many hearts may be laid bare.”

There was also a certain prophetess, Anna by name, daughter of Phanuel of the tribe of Asher. She had seen many days, having lived seven years with her husband after her marriage and then as a widow until she was 84. She was constantly in the temple, worshiping day and night in fasting and prayer. Coming on the scene at this moment, she gave thanks to God and talked about the child to all who looked forward to the deliverance of Jerusalem.

Dearly beloved: Do not be surprised that a trial by fire is occurring in your midst. It is a test for you, but it should not catch you off guard. Rejoice instead, in the measure that you share Christ’s sufferings. When his glory is revealed, you will rejoice exultantly. Happy are you when you are insulted for the sake of Christ, for then God’s Spirit in its glory has come to rest on you. See to it that none of you suffers for being a murderer, a thief, a malefactor, or a destroyer of another’s rights. If anyone suffers for being a Christian, however, he ought not to be ashamed. He should rather glorify God in virtue of that name. The season of judgment has begun, and began with God’s own household. If it begins this way with us, what must be the end for those who refuse obedience to the gospel of God? And if the just man is saved only with difficulty, what is to become of the godless and the sinner? Accordingly, let those who suffer as God‘s will requires continue in good deeds, and then trust their lives to a faithful creator.

To the elders among you I, a fellow elder, a witness of Christ suffering and sharer in the glory that is to be revealed, make this appeal. God’s flock is in your midst; give it a shepherd’s care. Watch over it willingly as God would have you do, not under constraint; and not for shameful profit either, but generously. Be examples to the flock, not lording it over those assigned to you, so that when the chief Shepherd appears you will win for yourselves the unfailing crown of glory.

In the same way, you younger men must be obedient to the elders. In your relations with one another, clothe yourselves with humility, because God, (as Scripture says,) “is stern with the arrogant but to the humble he shows kindness.”

Taking a seat opposite a treasury, Jesus observed the crowd putting money into the collection box. Many of the wealthy put in sizable amounts; but one poor widow came and out in two small copper coins worth a few cents. Jesus called his disciples over and told them: “I want you to observe that this poor widow contributed more than all the others who donated to the treasury. They gave from their surplus wealth, but she gave from her want, all that she had to live on.”