Feb. 02 Meeting of our Lord with Simeon and Anna 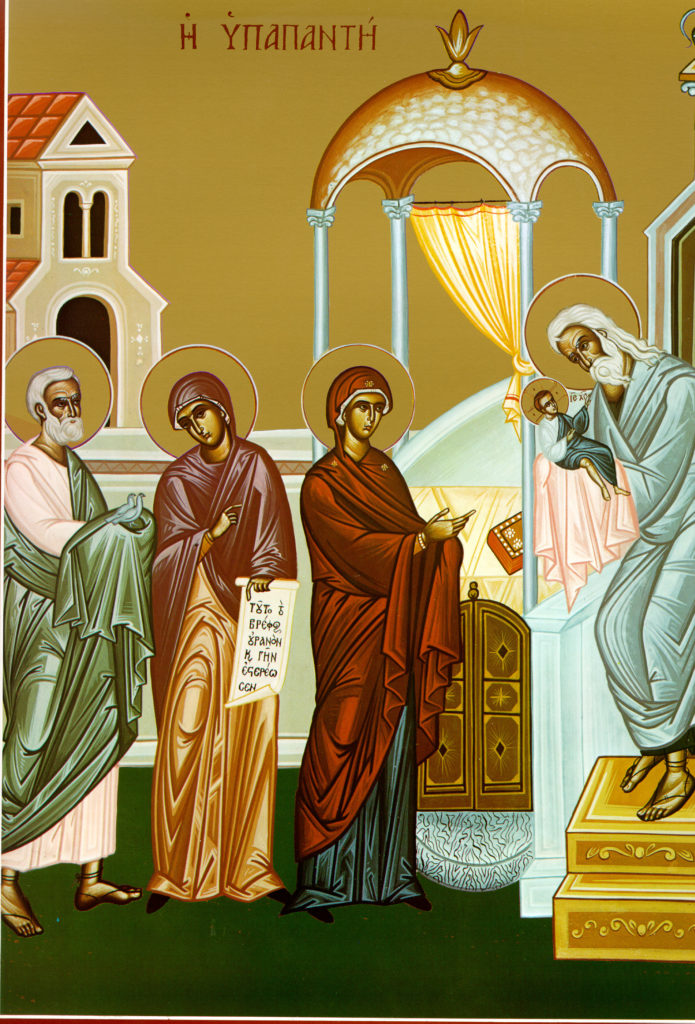 The encounter of our Lord, God, and Savior Jesus Christ with Simeon and Anna, celebrated 40 days after the Nativity of the Savior on Dec. 25, is one of the most ancient of all feasts established in Jerusalem in the 4th century. St. Sophronius of Jerusalem wrote about this feast: “Let us all hasten to meet (encounter) Christ. Everyone should be eager to join the procession and carry a light. Our lighted candles are a sign of the divine splendor of the One who comes to expel the dark shadows of evil and to make the whole universe radiant with the brilliance of his eternal Light.”

Rejoice, Theotokos, Virgin full of grace; for from you has shown forth the Sun of Justice, Christ our God enlightening those who are in darkness. Rejoice also, you just elder; you received in your arms the liberator of our souls, who grants us resurrection.

Christ our God, through Your birth You sanctified the virgin’s womb and blessed the hands of Simeon as was proper. Now You have come and saved us. Give peace to nations at war and strengthen our government. You, alone, love mankind.

Brothers and sisters: it is indisputable that a lesser person is blessed by a greater. And whereas men subject to death receive tithes, scripture testifies that this man lives on. Levi, who receives tithes, was, so to speak, tithed in the person of his father, so he was still in his fathers loins when Melchizedek met Abraham.

If, then, perfection had been achieved through the levitical priesthood (on the basis of which the people received the law), what need would there have been to appoint a priest according to the order of Melchizedek, instead of choosing a priest according to the order of Aaron? When there is a change of priesthood, there is necessarily a change of law. Now he of whom these things are said was of a different tribe, none of whose members ever officiated at the altar. It is clear that our Lord rose from the tribe of Judah, regarding which Moses said nothing about priests. The matter is clearer still if another priest is appointed according to the likeness of Melchizedek: one who has become a priest, not in virtue of a law expressed in a commandment concerning physical descent, but in virtue of the power of a life which cannot be destroyed. Scripture testifies: “You are a priest forever according to the order of Melchizedek.”

There lived in Jerusalem at the time a certain man named Simeon. He was just and pious, and awaited the consolation of Israel, and the Holy Spirit was upon him. It was revealed to him by the Holy Spirit that he would not experience death until he had seen the anointed of the Lord. He came to the temple now, inspired by the Spirit; and when the parents brought in the child’s Jesus to perform for him the customary ritual of the law, Simeon took the child in his arms and blessed God in these words: “Now, Master, you can dismiss your servant in peace; you have fulfilled your word. For my eyes have witnessed your saving deed displayed for all the peoples to see: A revealing light to the Gentiles, the glory of your people Israel.”

The child’s father and mother were marveling at what was being said about him. Simeon blessed him and said to Mary his mother: “This child is destined to be the downfall on the rise of many in Israel, a sign that will be opposed — and you yourself shall be pierced with a sword — so that the thoughts of many hearts may be laid bare.”

There was also a certain prophetess, Anna by name, daughter of Phanuel of the tribe of Asher. She had seen many days, having lived seven years with her husband after her marriage and then as a widow until she was 84. She was constantly in the temple, worshiping day and night in fasting and prayer. Coming on the scene at this moment, she gave thanks to God and talked about the child to all who looked forward to the deliverance of Jerusalem.

When the pair had fulfilled all the prescriptions of the law of the Lord, they returned to Galilee and their own town of Nazareth the child grew in size and strength, filled with wisdom, and the grace of God was upon him.