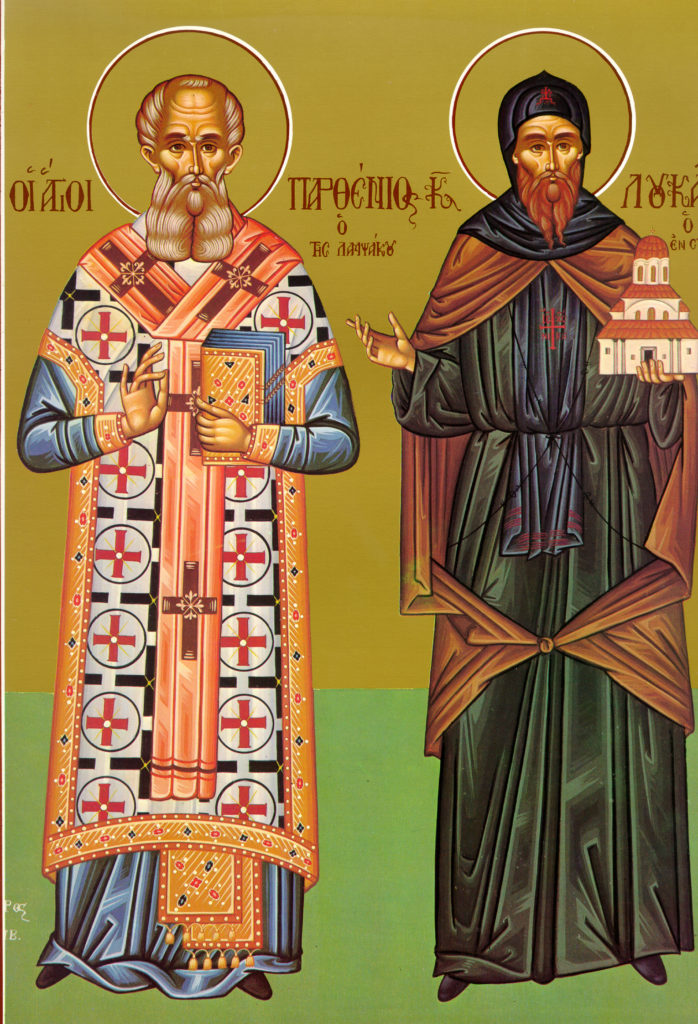 Parthenius was the son of a deacon from the town of Melitopolis. As a child he remembered well the words of the Gospel and endeavored to fulfill them. He settled near a lake, where he fished. Then he sold the fish and distributed the money to the poor. By God’s providence he was chosen as bishop of Lampsacus. He cleansed the town of paganism, closed the idolatrous temples, built many churches and strengthened believers in the faith. Through prayer he healed every manner of illness and was particularly powerful over evil spirits. On one occasion when he wanted to cast out an evil spirit from an insane man, the evil spirit begged him not to do so. Parthenius said to him: “I will give you another man whom you can enter, and then him you can dwell.” The evil spirit asked him: “Who is this man?” “I am that man,” replied the saint. “Enter and dwell in me.” Upon hearing this, the evil spirit fled as though burned by fire, crying out: “How can I enter into the house of God?” St. Parthenius lived a long time and through his work manifested an abundant love for God and man. Pathenius  entered into eternal rest of Christ in the fourth century.

God of our fathers, You always deal with us in Your kindness. Take not Your mercy away from us; but through your prayers guide our life in peace.

O God-wise Parthenius, you have received the grace of miracles. O God-bearing father, you have dispelled all the passions of the faithful, and you have cast out the evil spirits. Therefore, we praise you, the perfect contemplator of divine truths.

Dearly beloved: First you must understand this: there is no prophecy contained in Scripture which is a personal interpretation. Prophecy has never been put forward by man’s willing it. It is rather that men impelled by the Holy Spirit have spoken under God’s influence.

In times past there were false prophets among God’s people, and among you also there will be false teachers who will smuggle in pernicious heresies. They will go so far as to deny the master who acquired 160 them for his own, thereby bringing on themselves swift disaster. They’re lustful ways will lure many away. Through them, the true way will be made subject to contempt.

They will deceive you with fabricated tales, in a spirit of greed. Their condemnation has not lain idle all this time, however; their destruction is not asleep. Did God spare even the angels who sinned? He did not! He held — them captive in Tartarus – consigned them to pits of darkness, to be guarded until judgment. Nor did he spare the ancient world – even though he preserved Noah as a preacher of holiness, with seven others, when he brought down the flood on that godless earth. He blanketed the cities of Sodom and Gomorrah in ashes and condemned them to destruction, thereby showing what would happen in the future to the godless. He did deliver Lot, however, a just man oppressed by the conduct of men unprincipled in their lusts. (Day after day that just one, good as he was, felt himself tormented by seeing and hearing the lawless deeds of those among whom he lived.) The Lord, indeed, knows how to rescue devout men from trial, and how to continue the punishment of the wicked up to the day of judgment.

The Lord said to his disciples: “Be constantly on your guard. They will hand you over to the courts. You will be beaten in synagogues. You will be arraigned before governors and kings on my account and have to testify to your faith before them. But the good news must first be proclaimed to all the Gentiles. When men take you off into custody, do not worry beforehand about what to say. In that hour, say what you are inspired to say. It will not be yourselves speaking but the Holy Spirit. Brother will hand over brother for execution and likewise father his child; children will turn against their parents and have them put to death. Because of my name, you will be hated by everyone. Nonetheless, the man who holds out till the end is the one who will come through safe.”