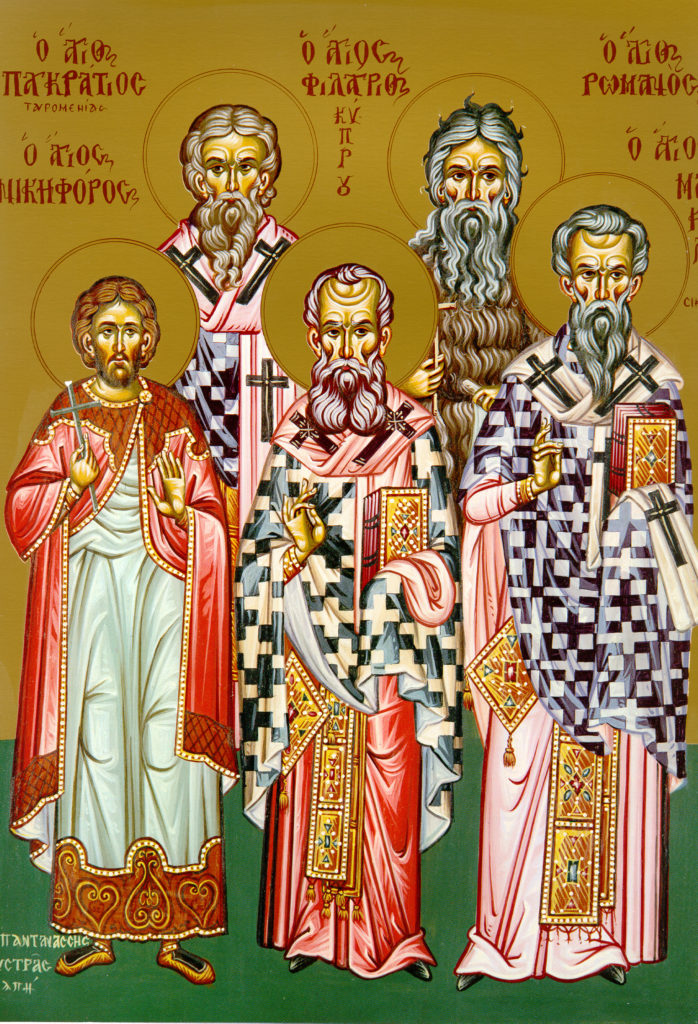 The holy martyr Nicephorus lived in the city of Syrian Antioch. In this city lived also the presbyter Sapricius, with whom Nicephorus was very friendly, so that they were considered brothers. They quarreled because of some disagreement, and their former love changed into enmity and hate. The holy martyr Nicephor took the place of Sapricius, who apostatized before a pagan judge. He was put to death in 260 during the reign of Emperor Valerian.

Your martyr Nicephor, O Lord our God, in his struggle received an incorruptible crown from You. With Your strength, he brought down the tyrants and broke the cowardly valor of demons. Through his prayers, O Christ our God, save our souls.

You were wrapped in ties of love, O Nicephor, and you undid the evils of hatred. Your head was severed from your body with a sword, and you became a heavenly martyr for the incarnate Savior. Pray to Him for those who sing to you.

Dearly beloved: I am writing you this second letter, intending them both as reminders urging you to sincerity of outlook. Recall the teaching delivered long ago by the holy prophets, as well as the new command of the Lord and Savior preached to you by the apostles.

Note this first of all: in the last days, mocking, sneering men who are ruled by their passions will arrive on scene. They will ask: “Where is that promised coming of his? Our forefathers have been laid to rest, but everything stays just as it was when the world was created.” In believing this, they do not take into account that of old there were Heavens and the earth drawn out of the waters and standing between the waters, all brought into being by the word of God. By water that world was then destroyed; it was overwhelmed by the deluge. The present heavens and earth are reserved by God’s word for fire; they are kept for the day of judgment, the day when godless men will be destroyed.

This point must not be overlooked, dear friends. In the Lord’s eyes, one day is as 1000 years and 1000 years are as a day. The Lord does not delay in keeping his promise – those some consider it a “delay.” Rather, he shows you generous patience, since he wants none to perish but all to come to repentance. The day of the Lord will come like a thief, and on that day the heavens will vanish with the war; the elements will be destroyed by fire, and the earth and all its deeds will be made manifest.

Since everything is to be destroyed in this way, what sort of men must you not be! How holy in your conduct and devotion, looking for the coming of the day of God and trying to hasten it! Because of it, the heavens will be destroyed in flames and the elements will melt away in a blaze. What we await are new heavens and a new earth where, according to his promise, the justice of God will reside.

So, beloved, while waiting for this, make every effort to be found without stain or defilement, and at peace in his sight. Consider that our Lord‘s patience is directed toward salvation. Paul, our beloved brother, wrote you this in the spirit of wisdom that is his, dealing with these matters as he does in all his letters. There are certain passages in them hard to understand. The ignorant and the unstable to start them (just as they do the rest of Scripture) to their own ruin.

The Lord said to his disciples: “During that period after trials of every sort the sun will be darkened, the moon will not shed it’s light, stars will fall out of the skies, and the heavenly hosts will be shaken. Then men will see the Son of Man coming in the clouds with great power and glory. He will dispatch his angels and assemble his chosen from the four winds, from the farthest bounds of earth and sky. Learn a lesson from the fig tree. Once the sap of its branches runs high and it begins to sprout leaves, you know that summer is near. And the same way, when you see these things happening, you will know that he is near, even at the door. I assure you, this generation will not pass away until all these things take place. The heavens and earth will pass away but my words will not pass.”