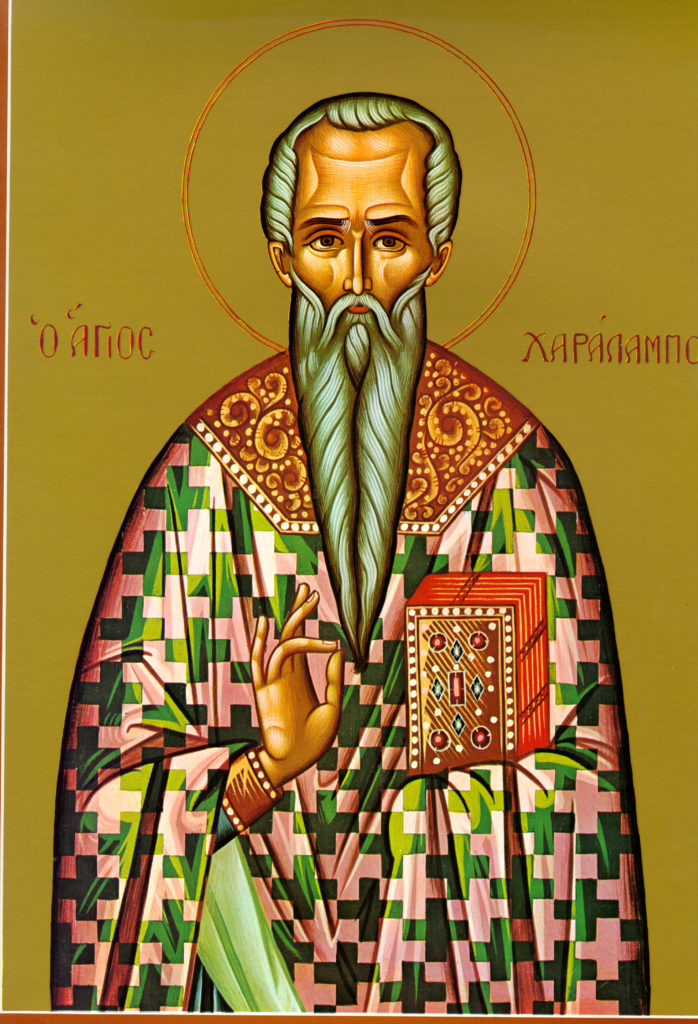 This great saint, Charalampus, was a bishop in Magnesia who suffered for Christ in his 113th year. When a terrible persecution began during the reign of Emperor Septimius Severus, the elderly Charalampus did not hide from the persecutors. Instead, he freely and openly perched the Christian faith. He endured all tortures as though he were in someone else’s body.When they skinned him alive, the forgiving elder said to the emperor’s soldiers: “Thank you, my bretheren, for in scraping my old body you renew my spirit for a new eternal life.” He worked many miracles and converted many to the Faith. Even the emperor’s daughter, Galina, abandoned the idolatry of her father and became a Christian. Condemned to death and brought to the place of execution, St. Charalampus raised his hands to heaven and prayed to God for all people, that God would grant them bodily health and spiritual salvation, and that He would multiply their fruit of the earth: “O Lord, Thou knowest that men are flesh and blood; forgive them their sins and pour out Thy grace on all!” After praying, this holy elder gave up his soul to God before the executioner lowered the sword on his neck. He suffered and died in the year 202. The emperor’s daughter Galina removed the saint’s body and buried it with honor.

You martyr Charalampus, O Lord our God, in his struggle received an incorruptible crown from You. With Your strength, he brought down the tyrants and broke the cowardly valor of demons. Through his prayers, O Christ our God, save our souls.

You were delighted with the grace of the priesthood, and you decorated the Church with your sufferings, You accepted them with joy for Christ, glorious and dear Charalampus, and now you enlighten the world as a true victor.

Dearly beloved: If we say, “We are free of the guilt of sin,” we deceive ourselves; the truth is not to be found in us. But if we acknowledge our sins, he who is just can be trusted to forgive our sins and cleanse us from every wrong. If we say, “We have never sinned,” we make him a liar and his word finds no place in us.

My little ones, I am writing this to keep you from sin. But if anyone should sin, we have, in the presence of the Father, Jesus Christ, an intercessor who is just. He is an offering for our sins, and not for our sins only, bit for those of the whole world.

The way we can be sure of our knowledge of him is to keep his commandments. The man who claims, “I have known him,” without keeping his commandments is a liar; in such a one there is no truth. But whoever keeps his world truly has the love of God been made perfect in him.  The way we can be sure we are in union with him is for the man who claims to abide in him to conduct himself just as he did.

The Lord said to his disciples: “The heavens and the earth will pass away but my words will not pass. As to the exact hour, no one knows it, neither the angels in heaven nor even the Son, but only the Father. Be constantly on the watch! Stay awake! You do not know when the appointed time will come. It is like a man traveling abroad. He leaves home and places his servants in charge, each with his own task; and he orders the man at the gate to watch with a sharp eye. Look around you! You do not know when the master of the house is coming, whether or dust, at midnight, when the cock crows, or at early dawn. Do not let him come suddenly and catch you asleep. What I say to you, I say to all; Be on guard!”

The feasts of Passover and Unleavened Bread were to be observed in two days’ time, and therefore the chief priests and scribes began to look for a way to arrest Jesus by some trick and kill him. Yet they pointed out, “Not during the festival, or people may riot.”