Feb. 12 Our father among Saints Meletius, Archbishop of Antioch 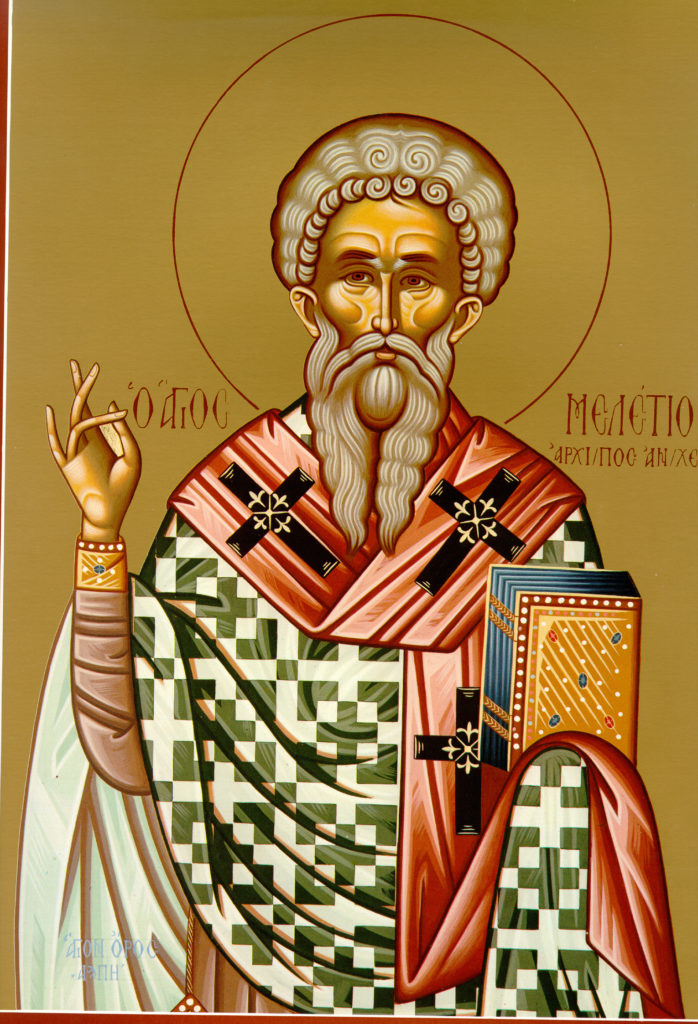 Our holy father Meletiusm archbishop of Antioch, was elected to the Patriarchal See in 360, but within a month was exiled by Emperor Constantius. Reinstated in 379, he held a council for 150 bishops and took a prominent role in the Ecumenical Council of Constantinople in 381. He was persecuted on account of the Nicene faith with frequent exile and soon after presiding over the First Ecumenical Council of Constantinople he fell asleep in the Lord. St. Meletius was the one who ordained the future hierarch St. Basil the Great as a deacon. St. Meletius also baptized and encouraged St. John Chrysotom, who later eulogized his former archoaster.

Your life has shown you to your flock as a rule of faith, an image of gentleness, and a teacher of moderation. You acquired greatness through humility and wealth through poverty. O father and bishop Meletius, intercede with Christ our God to save our souls.

The Macedonian apostate feared your spiritual courage and fled. We your servants gather around you in order to obtain your intercession. O father Meletius, you are equal to the angels and the fiery sword of Christ our God. We praise you as a star enlightening all of us.

Timothy my son: But understand this: there will be terrifying times in the last days. People will be self-centered and lovers of money, proud, haughty, abusive, disobedient to their parents, ungrateful, irreligious, callous, implacable, slanderous, licentious, brutal, hating what is good, traitors, reckless, conceited, lovers of pleasure rather than lovers of God, as they make a pretense of religion but deny it power. Reject them. For some of these slip into homes and make captives of women weighed down by sins, led by various desires, always trying to learn but never able to reach a knowledge of the truth. Just as Jannes and Jambres opposed Moses, so they oppose the truth–people of depraved minds, unqualified in the faith. But they will not make further progress, for their foolishness will be plain to all, as it was with those two.

You have followed my teaching, way of life, purpose, faith, patience, love, endurance, persecutions, and sufferings, such as happened to me in Antioch, Iconium, and Lystra, persecutions that I endured. Yet from all these things the Lord delivered me. In fact, all who want to live religiously in Christ Jesus will be persecuted. But wicked people and charlatans will go from bad to worse, deceivers and deceived. But you, remain faithful to what you have learned and have known [the] sacred scriptures, which are capable of giving you wisdom for salvation through faith in Christ Jesus. All scripture is inspired by God and is useful for teaching, for refutation, for correction, and for training in righteousness, so that one who belongs to God may be competent, equipped for every good work.

At that time, in hearing of all the people, Jesus said to his disciples: “Beware of the scribes, who like to parade around in their robes, and love marks of respect in public, front seats at synagogues, and places of honor at banquets. There men are going through the savings of widows while they recite long prayers to keep up appearances. The heavier sentence will be theirs.”

Jesus glanced up and saw the rich putting their offerings into the treasury, and also a poor widow putting in two copper coins. At that he said: “I assure you, this widow has put in more than all the rest. They make contributions out of their surplus, but she from her want has given what she could not afford – every penny she has to live on.”