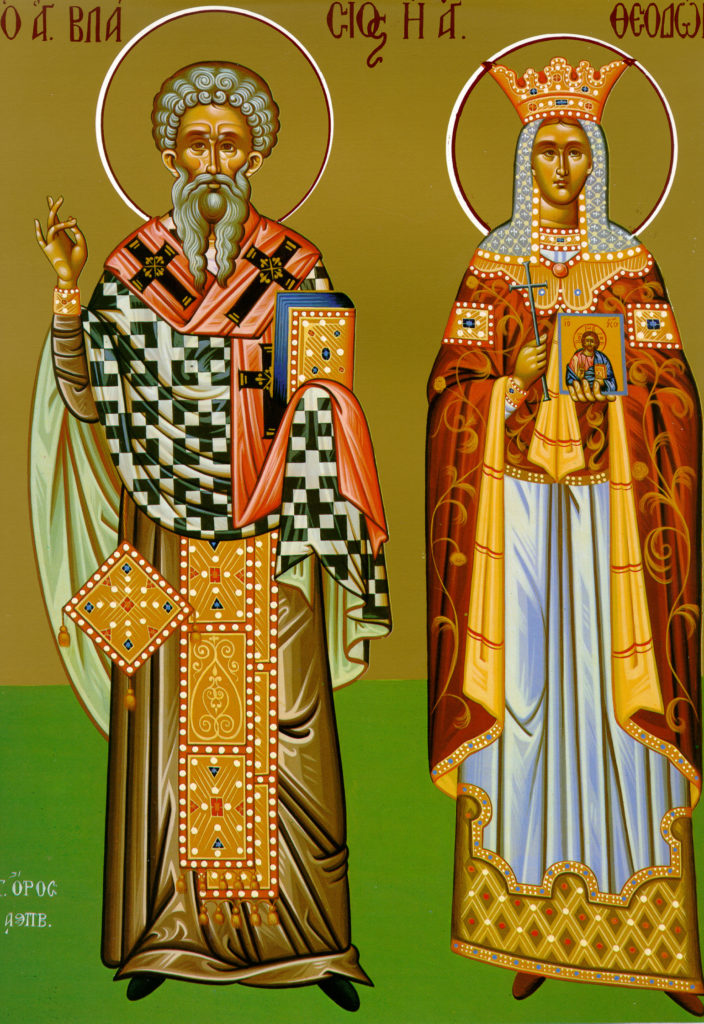 Blaise was born in the province of Cappadocia. From his early childhood, he was God-fearing and meek. Because of his great virtues, he was chosen as bishop of the city of Sebaste [in Armenia]. Blaise was a great spiritual and moral beacon in the pagan city. During a grave persecution of Christians, St. Blaise encouraged his flock and visited martyrs of Christ in prison. FOremost among them was the eminent and glorious Eustratius. When the city of Sebaste was completely emptied of Christians– some were slain, others fled– the elderly Blaise withdrew to Mount Argeos and settled there in a cave. Wild beasts recognized the holy man and gathered around him. But the persecutors found the saint even in this remote place and brought him to trial. Along the way, Blaise cured a young boy who had a bone caught in his throat. At the plea of a poor widow whose pig was snatched by a wolf, the saint, by the power of his prayer, made the wolf return it. The sinister judges tortured Blaise severely, flogging him and scraping him with an iron comb. By his steadfastness in the Christian Faith, Blaise converted many pagans to the Faith. Seven women and two children languished in prison with him. The women were beheaded first, and afterward the wonderful Blaise was beheaded with the two children. He suffered and was glorified in the year 316.

You shared in the apostles’ way of life and succeeded to their throne, divinely inspired bishop. You found access to contemplation in the active life. Therefore, you rightly taught the word of truth and struggled for the faith to the shedding of your blood. O Priest Martyr Blaise, pray to Christ our God to save our souls.

O God-bearing Blaise, you were a holy plant, an unfading flower, and a fertile vine in the vineyard of Christ. Fill with joy the hearts of those who celebrate your memory with fervor and never cease to intercede for all of us.

Dearly beloved, it is no new commandment that I write to you, but an old one which you had from the start. The commandment, now old, is the word you have already heard. On second thought, the commandment that I write is new, as it is realized in him and you, for the darkness is over and the real light begins to shine. The man who claims to be in light, hating his brother all the while, is in darkness even now. The man who continues in the light is the one who loves his brother; there is nothing in him to cause a fall. But the man who hates his brother is in darkness. He walks in shadow, not knowing where he is going, since the dark has blinded his eyes.

At that time Jesus was in Bethany reclining at table in the house of Simon the leper. A woman entered carrying an alabaster jar of perfume made of expensive aromatic nard. Breaking the jar, she began to pour the perfume over his head. Some were saying to themselves indignantly: “What is the point of this extravagant waste of perfume? It could have been sold for over three hundred silver pieces and the money given to the poor.” They were infuriated with her, but Jesus said: “Let her alone. Why do you criticize her? She has done me a kindness. The poor you will always have with you and you can be generous to them whenever you wish, but you will not always have me. She has done what she could. By perfuming my body she is anticipating its preparation for burial. I assure you, whenever the good news is proclaimed throughout the world, what she has done will be told in her memory.”