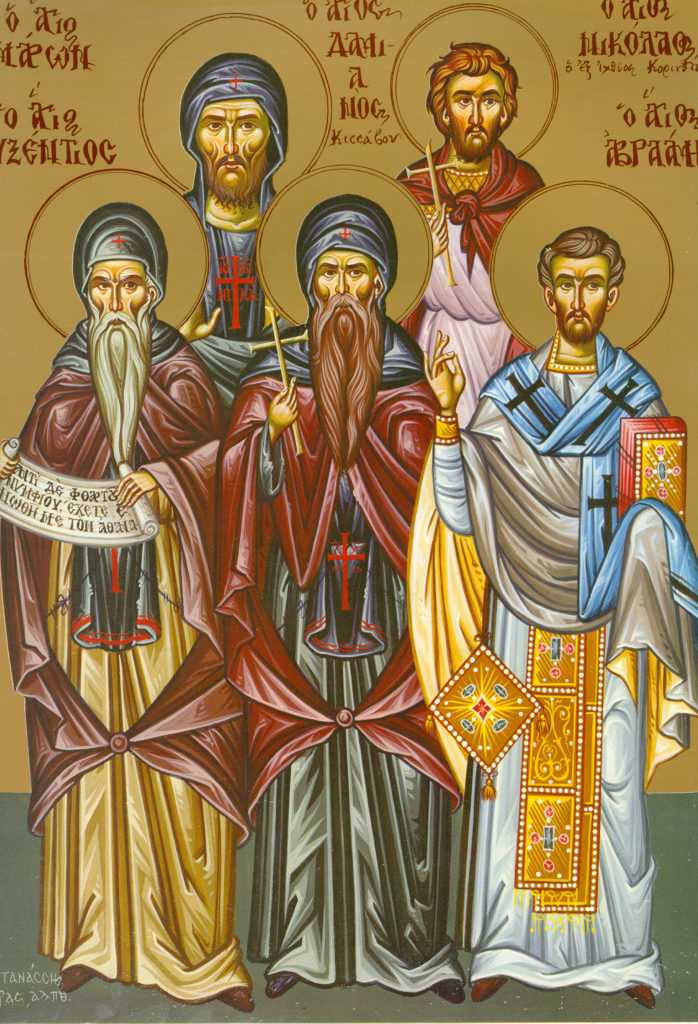 Our venerable father Auxentius on Mount Skopa in Bithynia, priest and archmandrite, who argued the Chalcedonian faith with a strong voice in a prominent place as if established in a place of authority.

The passing of our venerable father Constantine, whose monastic name was Cyril, the Apostle of the Slavs. This man from Thessalonica, along with his brother Methodius, was sent by Photius the bishop of Constantinople to Moravia, where he preached the Christian faith and devised an alphabet that they might translate the sacred books from Greek to the Slavic language. When they came to Rome, Cyril, who was previously known as Constantine, was afflicted by an illness. He was made a monk and the same day fell asleep in the Lord in 869.

You made the wilderness your dwelling, O Auxentius, the bearer of God. You became an angel in the flesh and a wonder-worker. Through prayers, fast, and vigils, you obtained from God special graces to heal the sick and to sanctify the souls of those who come to you with trust. Glory to the One who gave you strength! Glory to the One who crowned you! Glory to the One who through your intercession grants healing to all!

You found your paradise in asceticism and mastered your body’s passions; you grew stronger in faith and blossomed as a flower in the midst of the Garden, O Auxentius.

From your childhood you made wisdom your sister, and you took her to wife as a radiant virgin. You adorned your mind and soul with it like gold. You became a second great Cyril, O voice of God. You became a martyr by name and a blessed thinker.

Enlightening the world by your divinely inspired teachings, you have extended your sway like lightning over the world. You sow the brilliant Word of God everywhere you go; all the corners of the world shine with your miracles, the north, south, east and west, O blessed Cyril.

The Lord said: “I am the gate. Whoever enters through me will be safe. He will go in and out, and find pasture. The thief comes only to steal and slaughter and destroy. I came that they might have life and have it to the full. I am the good shepherd; the good shepherd lays down his life for the sheep. The hired hand – who is no shepherd nor owner of the sheep– catches sight of the wolf coming and runs away, leaving the sheep to be snatched and scattered by the wolf. That is because he works for pay; he has no concern for the sheep. I am the good shepherd. I know my sheep and my sheep know me in the same way that the Father knows me and I know the Father; for these sheep I will give my life. I have other sheep that do not belong to this fold. I must lead them, too, and they shall hear my voice. There shall be one flock,then, one shepherd.”

Children, it is the final hour; just as you heard that the antichrist was coming, so now many such antichrists have appeared. This makes us certain that it is the final hour. It was from our ranks that they took their leave — not that they really belong to us; for if they had belonged to us, they would have stayed with us. It only served to show that none of them was ours. But you have the anointing that comes from the Holy One, so that all knowledge is yours. My reason for having written you is not that you do not know the truth but that you do, and that no lie has anything in common with the truth. Who is the liar? Who denies that Jesus is the Christ. He is the antichrist, denying the Father and the Son. Anyone who denies the Son has no claim on the Father, but he who acknowledges the Son can claim the Father as well.

He himself made us a promise and the promise is no less than this: eternal life. I have written you these things about those who try to deceive you.

As for you, the anointing you received from him remains in your heart. This means you have no need for anyone to teach you. Rather, as his anointing teaches you about all things and is true — free from any lie — remain in him as that anointing taught you.

Remain in him now, little ones, so that, when he reveals himself, we may be fully confident and not retreat in shame at his coming. If you consider the holiness that is his, you can be sure that everyone who acts in holiness has been begotten by him.

See what love the Father has bestowed on us in letting us be called children of God! Yet that is what we are. The reason the world does not recognize us is that it never recognized the Son. Dearly beloved, we are God’s children now; what we shall later be has not yet come to light. We know that when it comes to light we shall be like him, for we shall see him as he is. Everyone who has this hope based on him keeps himself pure, as he is pure.

Everyone who sins acts lawlessly for sin is lawlessness. You know well that the reason he revealed himself was to take away sins; in him there is nothing sinful. The man who remains in him does not sin. The man who sins has not seen him or known him.

Little ones, let no one deceive you; the man who acts in holiness is holy indeed, even as the Son is holy. The man who sins belongs to the devil, because the devil is a sinner from the beginning. It was to destroy the devil‘s works that the Son of God revealed himself. No one begotten of God acts sinfully because he remains of God’s stock; he cannot sin because he is begotten of God. That is the way to see who are God’s children, and who are the devils.

At that time as Jesus and the disciples neared Bethphage and Bethany on the Mount of Olives, close to Jerusalem, he sent off two of his disciples with the instruction: “Go to the village straight ahead of you, and as soon as you enter it you will find tethered there a colt on which no one has ridden. Untie it and bring it back. If anyone says to you, ‘Why are you doing that?’ say, ‘The Master needs it but he will send it back here at once.’” So they went off, and finding a colt tethered out on the street near a gate, they untied it. Some of the bystanders said to them, “What do you mean by untying that colt?” They answered as Jesus had told them to, and the men let them take it. They brought the colt back to Jesus and threw their cloaks across its back, and Jesus sat on it. Many people spread their cloaks on the road, while others spread reeds which they had cut in the fields. Those preceding Jesus as well as those who followed cried out: “Hosanna! Blessed is he who comes in the name of the Lord! Blessed is the reign of our father David to come! Hosanna in the highest!” Jesus entered Jerusalem and went into the temple precincts. He inspected everything there, but since it was already the afternoon, he went out to Bethany accompanied by the Twelve.