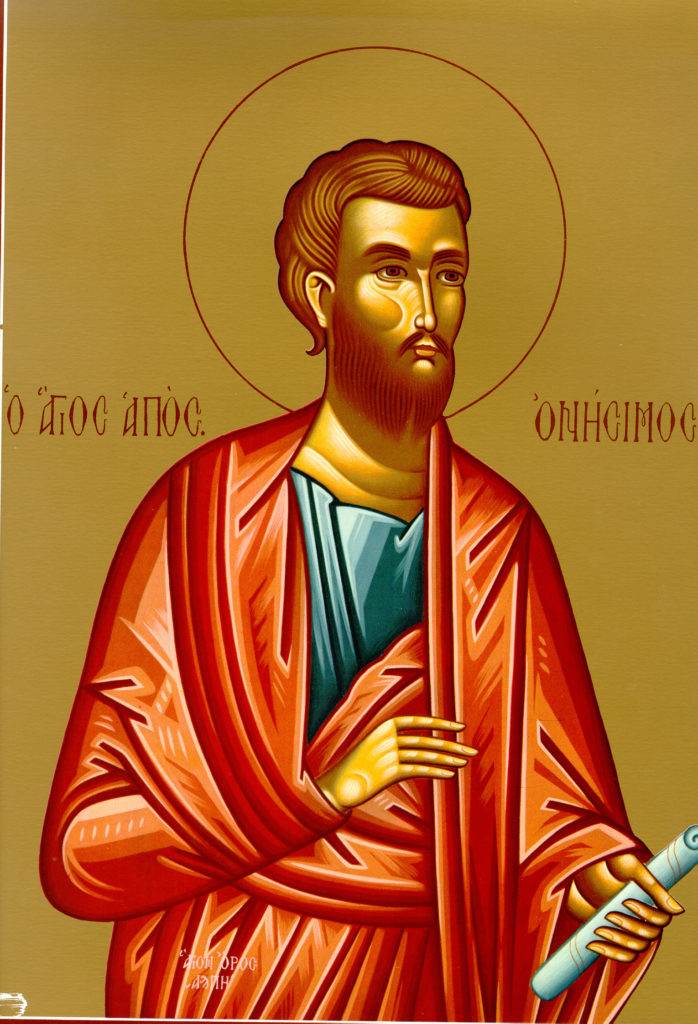 Onesimus was one of the Seventy Apostles. He was a slave but transgressed against his master and fled to Rome. There he heard the Gospel from Apostle Paul and was baptized. Later, Onesimus was consecrated a bishop by the apostles themselves, and he accepted the episcopal throne at Ephesus at the death of the Apostle Timothy. At the time of Trajan’s persecution, Onesimus, already an old man, was arrested and brought to Rome. In Rome Onesimus gave an account of himself before the judge Tertulus, and he was imprisoned and finally beheaded. A wealthy woman removed his body, placed it in a silver coffin and buried it honorably in the year 109.

O holy Apostle Onesimus, intercede with the merciful God that He may grant our souls forgiveness of sins.

You came upon the world like a radiant glow, and you shine with the rays of the sun, O blessed saint. You followed the illumined world of blessed Paul, and for this we honor you, O glorious Onesimus.

Dearly beloved: No one begotten of God acts sinfully because he remains of God’s stock; he cannot sin because he is begotten of God. That is the way to see who are God’s children, and who are the devil’s. No one whose actions are unholy belong to God, nor anyone who fails to love his brother.

This, remember, is the message you heard from the beginning: we should love one another. We should not follow the example of Cain who belonged to the evil one and killed his brother. Why did he kill him? Because his own deeds were wicked while his brother’s were just. No need, then, brothers and sisters, to be surprised if the world hates you. That we have passed from death to life we know because we love the brethren. The man who does not love is among the living dead. Anyone who hates his brother is a  murderer, and you know that eternal life abides in no murderer’s heart. The way we came to understand love was that He laid down His life for us; we too must lay down our lives for our brothers and sisters.

I ask you, how can God’s love survive in a man who has enough of this world’s goods yet closes his heart to his brother when he sees him in need? Little children, let us love in deed and in truth and not merely talk about it.

At that time Judas Iscariot, one of the Twelve, went off to the chief priest to hand Jesus over to them. Hearing what he had to say, they were jubilant and promised to give him money. Judas for his part kept looking for an opportune way to hand Jesus over.

On the first day of Unleavened Bread, when it was customary to sacrifice the paschal lamb, the disciples said to Jesus, “Where do you wish us to go and prepare the Passover supper for you?” He sent two of his disciples with the instructions: “Go into the city and you will come upon a man carrying a water jar. Follow him. Whatever house he enters, say to the owner, ‘The Teacher asks, Where is my guest room where I may eat the Passover with my disciples?’ Then he will show you an upstairs room, spacious, furnished, and all in order. That is the place you are to get ready for us.” The disciples went off. When they reached the city they found it just as Jesus had told them, and they prepared the Passover supper.

As it grew dark Jesus arrived with the Twelve. They reclined at table, and in the course of the meal Jesus said, “I give you my word, one of you is about to betray me, yes, one who is eating with me.” They began to say to him sorrowfully, one by one, “Surely not I!” He said, “It is one of the Twelve – a man who dips into dish with me. The Son of Man is betrayed. It were better for him had he never been born.”

During the meal he took the bread, blessed and broke it, and gave it to them. “Take this,: he said, “this is my body.” He likewise took the cup, gave thanks and passed it to them, and they all drank from it. He said to them: “This is my blood, the blood of the covenant, to be poured out on behalf of many. I solemnly assure you, I will never again drink of the fruit of the vine until the day when I drink it new in the reign of God.”

After singing songs of praise, they walked out to the Mount of Olives. Jesus then said to them: “Your faith in me shall be shaken, for Scripture has it, ‘I will strike the shepherd and the sheep will be dispersed.’ But after I am raised up, I will go to Galilee ahead of you.” Peter said to him, “Even though all are shaken in faith, it will not be that way with me.” Jesus answered, “I give you my assurance, this very night before the cock crows twice, you will deny me three times.” But Peter kept reasserting vehemently, “Even if I have to die with you, I will not deny you.” They all said the same.

They went on to a place named Gethsemani. “Sit down here while I pray,” Jesus said to his disciples; at the same time he took along with him Peter, James, and John. Then he began to be filled with fear and distress. He said to them, “My heart is filled with sorrow to the point of death. Remain here and stay awake.” He advanced a little and fell to the ground, praying that if it were possible this hour might pass him by. He kept saying, “Abba (O Father), you have the power to do all things. Take this cup away from me. But let it be as you would have it, not as I.” When he returned he found them asleep. He said to Peter, “Asleep, Simon? You could not stay awake for even an hour? Be on guard and pray that you may not be put to the test. The spirit is willing but nature is weak.” Going back again he began to pray in the same words. Once again he found them asleep on his return. They could not keep their eyes open, nor did they know what to say to him. He returned a third time and said to them, “Still sleeping? Still taking your ease? It will have to do. The hour is on us. You will see that the Son of Man is to be handed over to the clutches of evil men. Rouse yourselves and come along. See! My betrayer is near.”